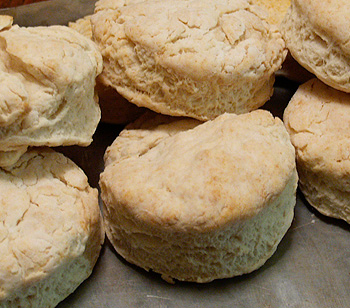 Baking Powder Biscuits are a puffy, baked quick bread that can be served in place of bread. The dough is quick to mix, and they are quick to bake.

They are not biscuits as someone from Britain, Australia or elsewhere would understand them to be — flat, hard and crispy, as the word biscuit (meaning “cooked twice”) would imply. In fact, if Baking Powder Biscuits turned out to be like a British biscuit, the cook would be very disappointed indeed.

Biscuit as used here is a North American usage of the word. These are almost like unsweetened scones. They should be light, tender, plump and fluffy, and are really best eaten on the same day as they are baked.

Baking Powder Biscuits consist of flour, baking powder, a fat, and milk. Some people add some salt. Soft or all-purpose flour is preferable to bread flour. Whole wheat flour should be avoided: the texture will be too crumbly and the cooked biscuits won’t stay together well. Some people strongly prefer buttermilk to milk.

Baking Powder Biscuits are popular in the southern United States and in the Maritimes area of Canada.

In the Canadian Maritimes, a warm plate of Baking Powder Biscuits can accompany just about any meal — from a hash cooked for breakfast to a boiled dinner or chowder in the evening. They will be split in half horizontally with a knife, and buttered. In the American south, for breakfast, the main course sometimes has Baking Powder Biscuits covered with “country-style” gravy.

They can also be used as a sweet snack or dessert, buttered and drizzled with maple syrup, pancake syrup, honey, corn syrup, sorghum syrup or molasses, or spread with jam or jelly.

Those who make flaky biscuits consistently emphasize the importance of sifting the dry ingredients (flour and baking powder) first.

You then mix in the fat. The fat used, whether it is butter, margarine or shortening, should be cold. Some advise to rub half the fat into the dry ingredients, so that it is spread throughout in small amounts, then cut the rest of the fat in, but in a bit larger pieces, to ensure flakiness. Others say freeze the fat, and grate it. Most just use their hands or a pastry cutter to mix it all into the dough at once.

You can make this part of the biscuit dough mixture ahead and put it covered in the refrigerator for a day or so; just don’t add any liquid until you are ready actually to go. Bisquick, a package mix, is essentially these biscuits made up to this stage.

The milk used should be cold.

You mix the milk with the blended flour and fat mixture. You add the milk a portion at a time. You may not need it all, depending on the humidity of the flour, etc. The dough should not be overly sticky. If it is, it has too much liquid in it. If the dough is really gloopy, you can use it for dumplings.

Mix until just until blended, then stop. The dough should just start to cling to your mixing fork, spoon, or hand, and just start to follow you around in the bowl. It is very easy to overwork the dough, and whatever you do, never knead it. The more you handle the dough, the harder the biscuits will be. You do not want gluten to develop.

You can drop the dough on a baking sheet by spoonfuls, or roll out the dough on a floured surface, and cut it with a biscuit cutter to get a more uniform appearance. If rolling the dough, roll it out to about ½ inch (1 cm.) Don’t twist the cutter in the dough, because it can pinch the edges and stop them from rising. Just use a straight cut down, and pull it straight back up.

If you get interrupted, you can store cut but unbaked biscuits in the fridge for up to an hour and still have them turn out.

“The hot biscuit runs a poor second to cornbread, but is considered of higher social caste. We abrogate and deprecate corn-bread when we have guests, but we should consider ourselves deficient in hospitality if we served a company meal without hot biscuits. We cannot conceive of a guest’s not relishing them, and a tale is told of a visitor to the South who never got to taste a hot biscuit, solely from his hostess’ zeal in trying to provide them hot. It seems that the visitor was a great conversationalist, and as the hot biscuits were passed him by the maid, he would take one, butter it, and delve into talk. He would pause, reach for his biscuit, and the hostess would say, “Oh, but that one is cold. You must have a hot one.” She would ring for fresh biscuits, the guest would take one and butter it, make conversation, and again, his biscuit would be snatched from him as he was about to eat it. The story goes that he left the South without ever having tasted a hot southern biscuit. It sounds like one of Irvin Cobb’s yarns, but it is more than plausible. We do not have here the beaten biscuit of Kentucky, but we make our biscuits much shorter than northern biscuits, and while I sometimes think longingly of my mother’s and grandmother’s biscuits, light, flaky, falling apart in layers, I bite into a Florida biscuit, crisp as Scotch shortbread, and no longer recall my ancestry.” — Rawlings, Marjorie Kinnan. Cross Creek. New York: Charles Scribner’s Sons. 1942.

“…to call [them] “Buttermilk Biscuits” would imply that there are other acceptable ways of making biscuits that do not involve buttermilk. There are not. If you’re not going to use buttermilk, you should not make biscuits. To be clear, biscuit recipes that don’t call for buttermilk abound, with labels like “baking-powder biscuits” and “cream biscuits.” Ignore these recipes. They inevitably result in disks that are shorter, drier, and blander than buttermilk biscuits. You are literally better off popping open a can of Pillsbury Grands or stirring together Bisquick and milk than making baking-powder biscuits. But there’s no excuse to go the pre-packaged route, because buttermilk biscuits are nearly as easy and usually don’t even require a trip to the grocery store. That’s because the term “buttermilk” is less rigid than it sounds, at least when it comes to making biscuits: As previously discussed, you can approximate a cup of buttermilk at home by mixing a cup of milk with a tablespoon of vinegar or lemon juice. You can even, if absolutely necessary, substitute plain yogurt for buttermilk—for the purposes of baking, it’s roughly the same thing. What matters is that you use milk that has been acidified in some way: The acid activates the leavening power of baking soda to create soft, moist, pleasantly spongy biscuits.” — Anderson, L.V. You’re Doing It Wrong: Biscuits. Slate Magazine. 18 April 2012. Retrieved May 2012 from http://www.slate.com/blogs/browbeat/2012/04/18/buttermilk_biscuit_recipe_infinitely_better_than_baking_powder_biscuits.html

This web site generates income from affiliated links and ads at no cost to you to fund continued research · Information on this site is Copyright © 2023· Feel free to cite correctly, but copying whole pages for your website is content theft and will be DCMA'd.
Tagged With: Biscuits, Quick Breads