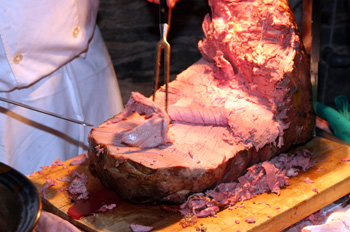 Alan Davidson, in “The Penguin Companion to Food” (London, 2002), says that a Baron of Beef is “both sides of the rump together, with the back part of the sirloin attached.” Most Brits agree with that definition and are clear on it; it’s on the North American side of the pond that the term is a bit muddled because the definition of rump is different. In English terms, the “rump” end of the cow includes some sirloin.

Some people in North America will call an extremely large cut from the back end of the cow a Baron of Beef. What they are really thinking of is a Steamship Round which contains only the Round area of the cow, with no sirloin. Caterers for large groups are clear on the difference, however: if you check their menus, they charge more for Baron of Beef because it contains sirloin than they will for Steamship Round, which does not.

A Baron of Beef will generally be anywhere from 100 to 200 pounds (45 to 90 kg.) You can’t normally toss one into your cart from the meat counter at your local Safeway’s; you have to order specially from a butcher.

Compare with Steamship Round.

Has to be cooked long and slow.

A Baron of beef weighing 200 pounds (90 kg) was served to 700 children in 1821 in Kingston-upon-Thames, England, to celebrate the coronation of King George the Fourth. Barons of beef went on to become extremely popular at large Victorian gatherings. At Christmas in 1899, Queen Victoria served Baron of Beef to Boer War soldiers and their wives at Windsor Castle.

Disregard any stories about Henry VIII deciding to enable this particular cut of meat. The word “baron” here comes from the French term, “bas-rond” (lower or hind round part).