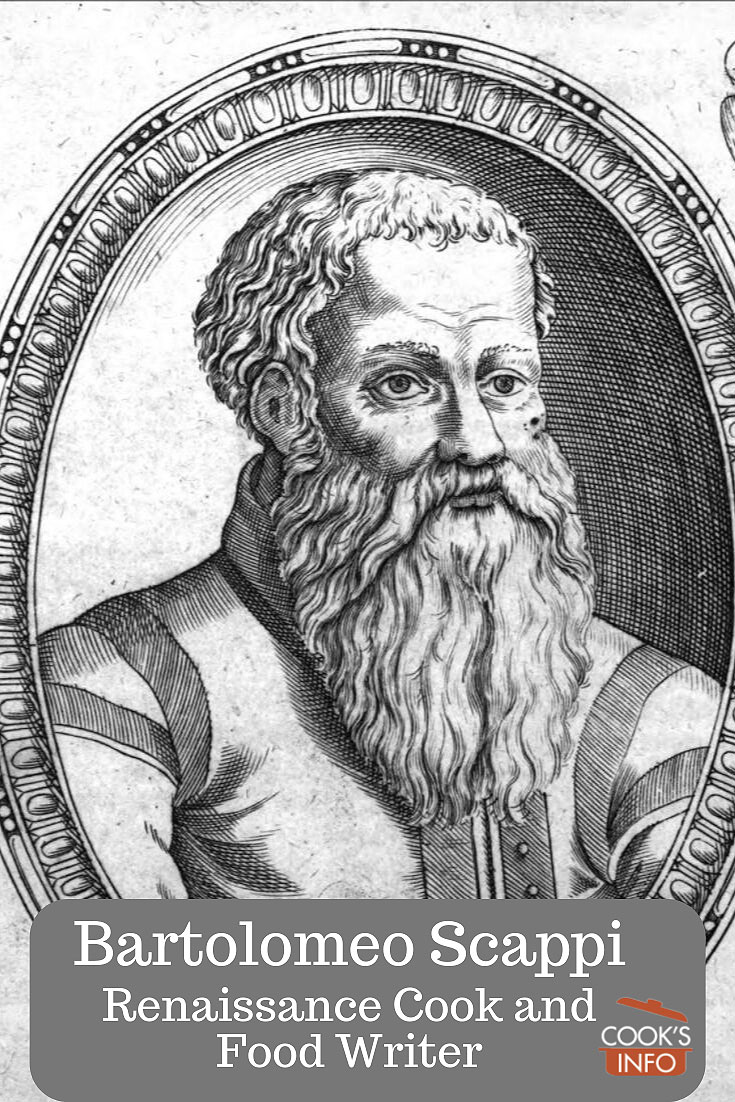 Bartolomeo Scappi (circa 1500 – 1570) was a Renaissance Italian author and cook. During his career, he cooked for six popes, and in fact was cooking at the Vatican at the same time as Michelangelo Buonarroti was working on the Sistine Chapel. He produced the first known illustrated cookbook in history.

His life is mostly reconstructed from knowledge of the events and people that he describes.

Some historians think Scappi was born in Bologna, others think Venice. The people in the province of Varese in Lombardy assert that he was born in Dumenza, Luinese in Varese Province, Lombardy.

By April 1536, Scappi was in the employ of someone who was probably Cardinal Lorenzo Campeggi (Scappi details in chapter four of his book a banquet that the cardinal gave in April 1536 for the Holy Roman Emperor Charles V.) When Campeggi died in 1539, Scappi went to work for another cardinal, possibly Cardinale Carpi. By 1549, he was cooking for Pope Paul III, who died 13 November 1549.

Scappi is able to describe in detail the food supplied to the cardinals during the resultant enclave to elect the successor to Pope Paul III. The enclave took over 2 months, from 29 November 1549 to 8 February 1550. Scappi described and illustrated the whole procedure of getting food to them, which was designed to ensure that neither poison nor secret messages got into their food. Some wags remarked that without the excellence of the food provided by Scappi, the cardinals might not have prolonged the enclave so much.

Scappi continued for the new Pope that was chosen on 8 February 1550: Julius III (aka Giammaria Ciocchi del Monte, born Rome 10 September 1487.) Sadly, Julius did not last long: he died only weeks later, on 23 March 1555. By 8 April 1855, a new pope had been chosen: Marcelus II (Marcello Cervini Degli Spannochi, born 6 May 1501 in Montepulciano, Tuscany.) Sadly, Marcelus did not linger in office long either, expiring only 22 days later on 6 May 1555.

Scappi cooked for all of these Popes, plus their following successors:

In 1570, Scappi published his famous cookbook “Opera di Bartolomeo Scappi, mastro dell’arte del cucinare, divisa in sei libri” (well, famous at least in food history circles), and dedicated it to Francesco di Reinoso, the personal cameriere to the pope (though at least one of the later editions, that of 1622 by Vecchi, was dedicated instead to “Mag. M. Matteo Barbini, Cuoco e Scalco celeberrismo della Citta di Venetia.”) 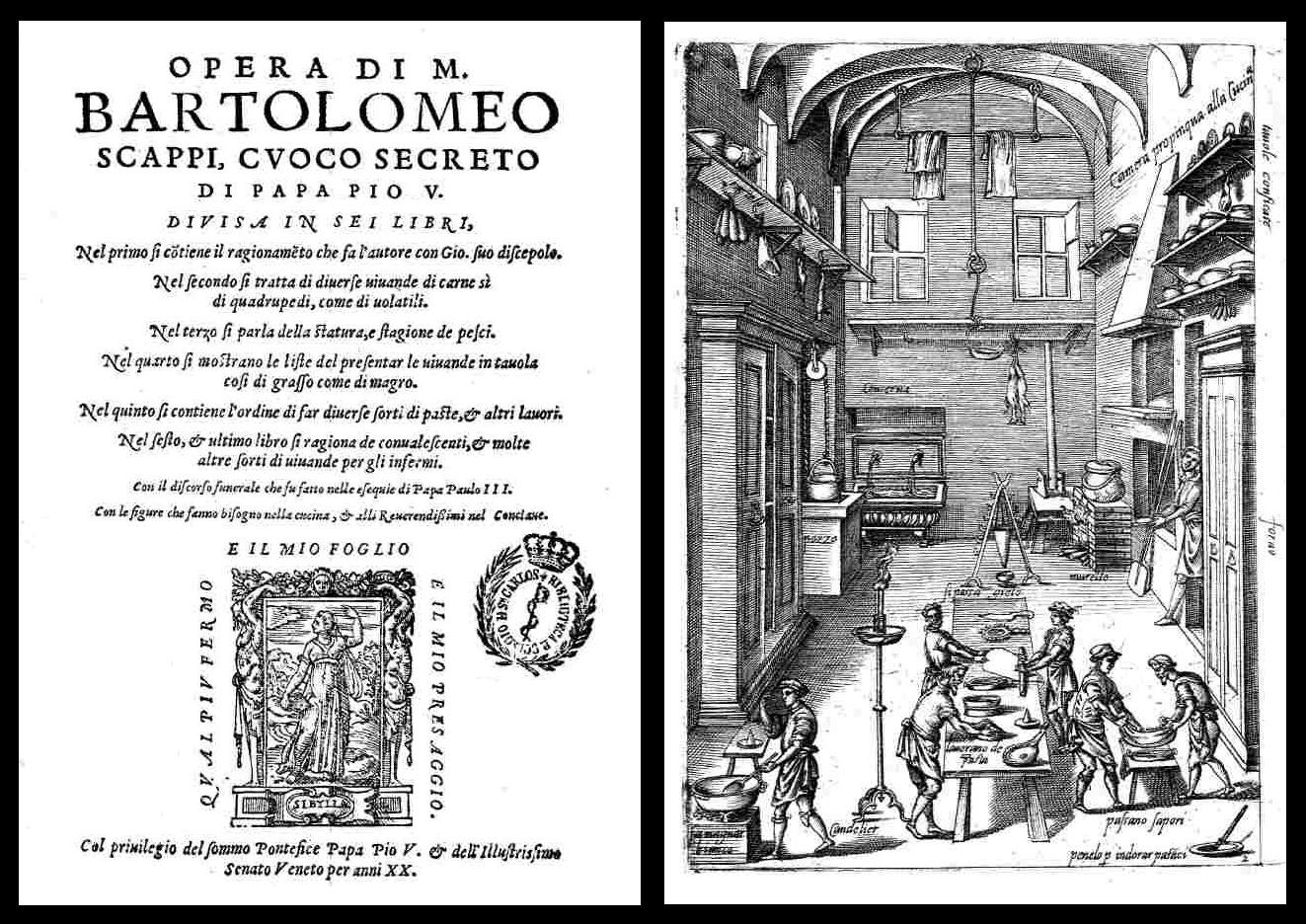 The book is divided into 6 “books”, each covering different topics:

There are over 1,000 food preparation methods and recipes (recipes are in book 2, 3 and 5) and 28 engraved illustrations, showing many of the kitchen utensils that were used in the mid-1500s in Italy. He also gave special menus for Lent. He also gave a recipe for couscous — “cuscus alla moresca.”

A lot of medieval tastes and cooking habits still come through in his book, for instance, in savoury dishes, the use of sweet ingredients and of spices such as ginger, nutmeg and cinnamon. It was a time, though, when change was happening: new foodstuffs were starting to come from the Americas, such as turkey, and recipes for flaky pastry were first appearing in Europe. His book represents perhaps the apex of Renaissance cooking in Italy, before the new French cooking came down and asserted its supremacy over everything else.

Like others in the renaissance, Scappi took a more scientific approach to cooking, giving details right down to illustrations. It was perhaps the first time that actual cooking techniques are outlined in print, such as the use of a weight to keep something under water while simmering, bains marie, greased paper to protect delicate parts of poultry from direct heat, using a wooden spoon in making gelatin because a metal one might make it bitter, how to do marinades, etc.

The publication year of his book is the last year that we know for sure Scappi was alive in. Some feel he was alive in 1572, when Gregory 13th was elected on 13 May 1572, and that by that time he had simply decided to retire, and so vanished from the public eye. 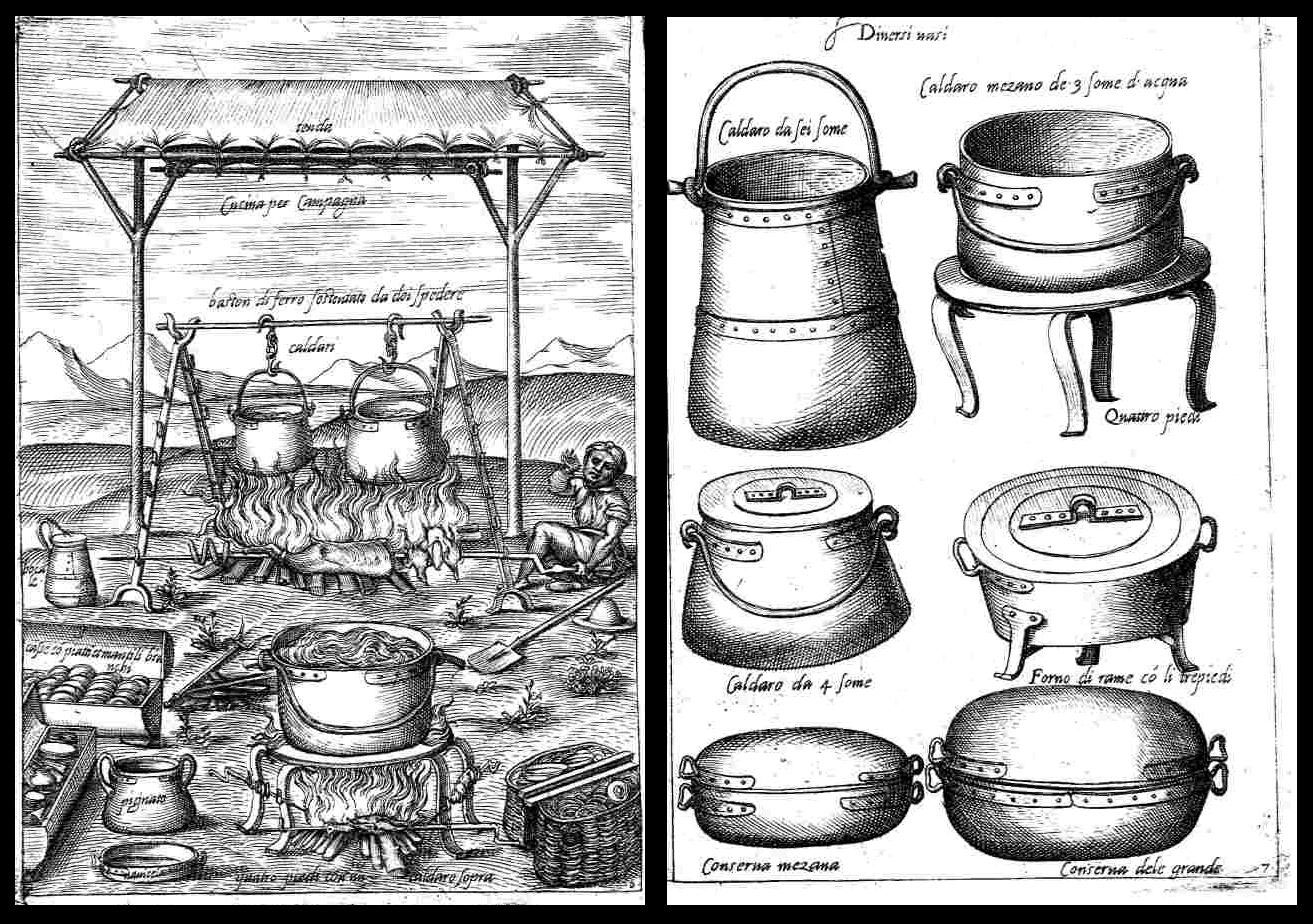 Illustration of various cauldrons and usage. peacay / flickr / CC BY 2.0

Deborah L. Krohn, associate professor and director of Master Studies at Bard Graduate Center, demonstrates that Scappi, the most famous chef of the Italian Renaissance, was at the vanguard of a new way of looking at the kitchen as a workshop or laboratory.

Chef Antonio Carluccio travels to St Peter’s Square to discover more about Bartolomeo Scappi, a man who had an extraordinary career as personal cook to Popes.

This web site generates income from affiliated links and ads at no cost to you to fund continued research · Information on this site is Copyright © 2023· Feel free to cite correctly, but copying whole pages for your website is content theft and will be DCMA'd.
Tagged With: Italian Food