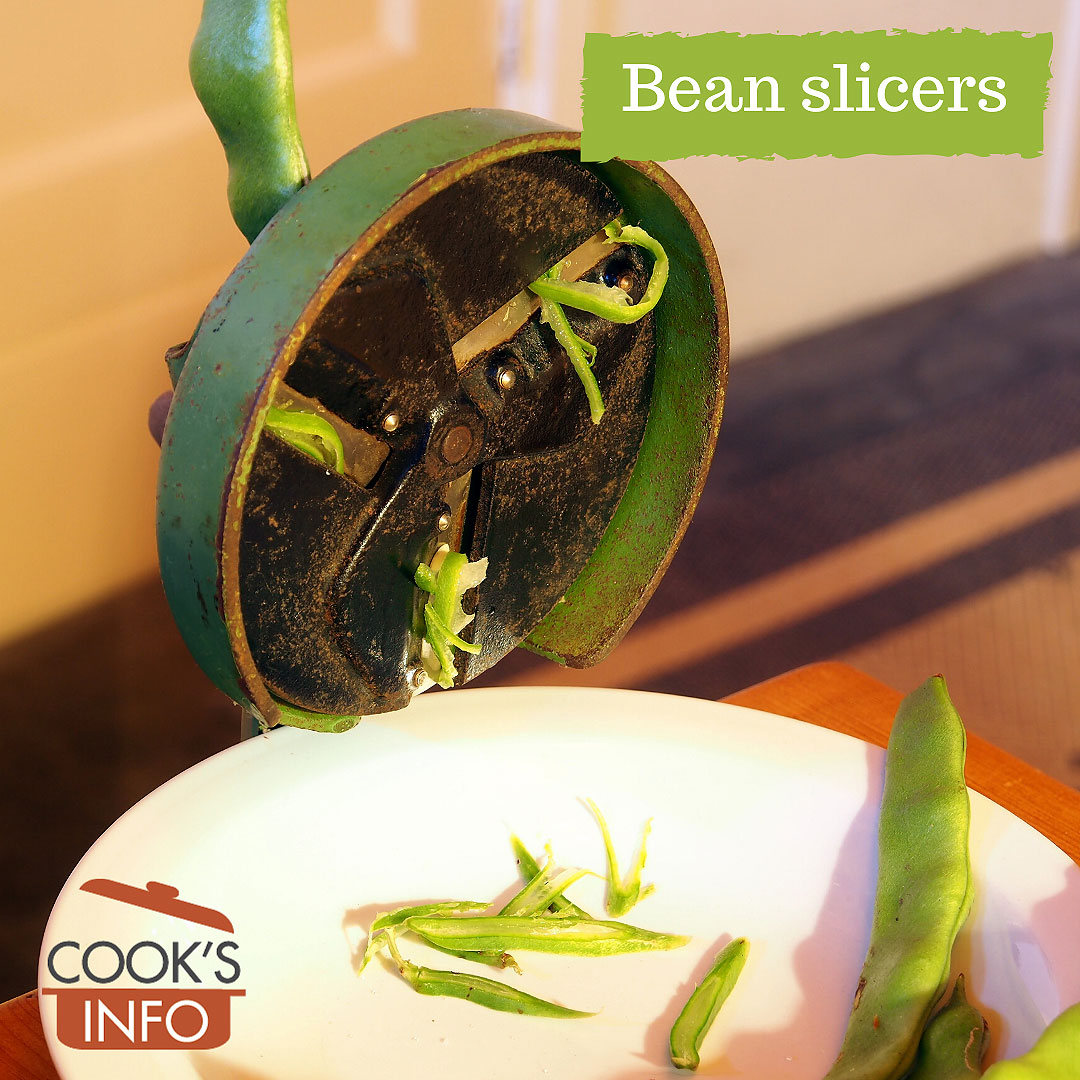 There are many different kinds and models.

Some are completely manual. They are simply a block with an open area with wires strung through it at the other end. You press and pull the beans through the wires to slice them. 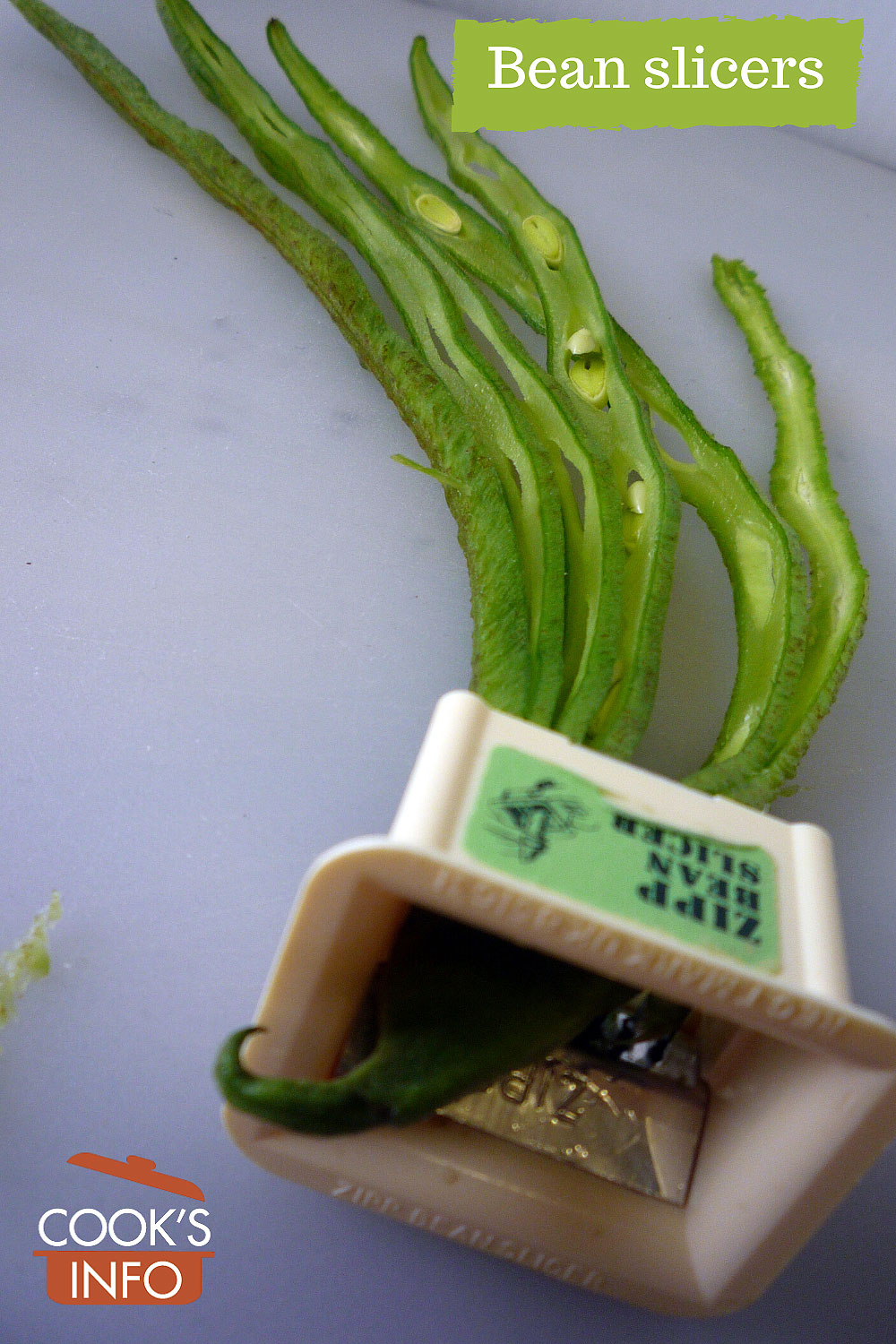 Many people, though, have always preferred the hand-cranked ones. You feed beans into a hopper while turning the hand crank. Good models can handle several beans at once. Some are designed to take the strings off the beans at the same time. Older ones clamp on the side of the table. Spong and Co. was one of the big manufacturers of these. Some new models use rubber suction cups instead.

While the hand-held ones can produce long, clean slices, the hand-cranked models do tend to yield a more shredded product.

There is no doubt though that the hand-cranked ones are faster, and can let you process a glut of beans relatively quickly for preservation by freezing or salting.

Some electric kitchen appliances, such as the Kenwood, used to have an optional part that would slice beans. 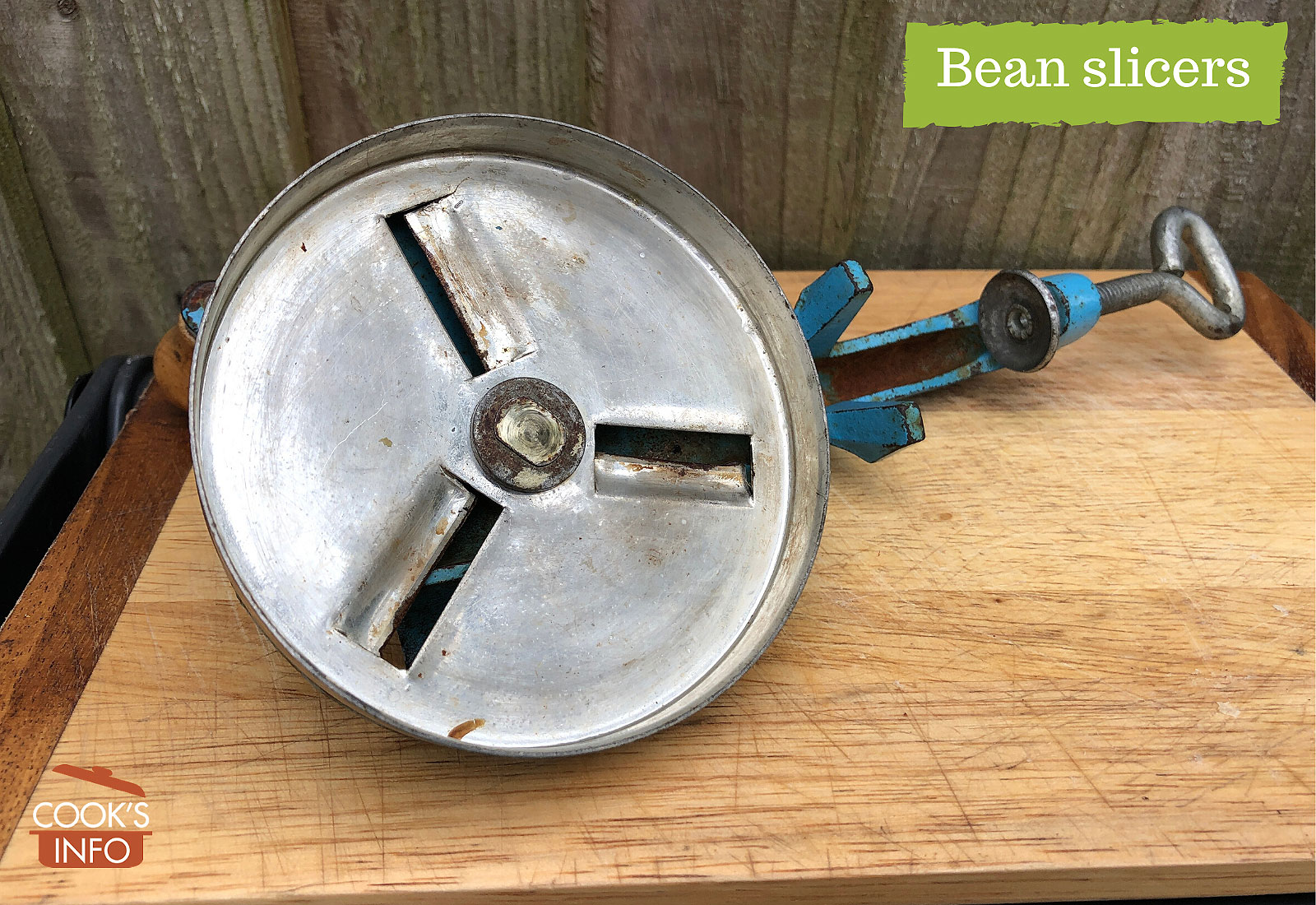 Put a plate underneath the crank slicers to catch the bean slices as they come out.

If you are doing runner beans, first pare off the stringy sides. 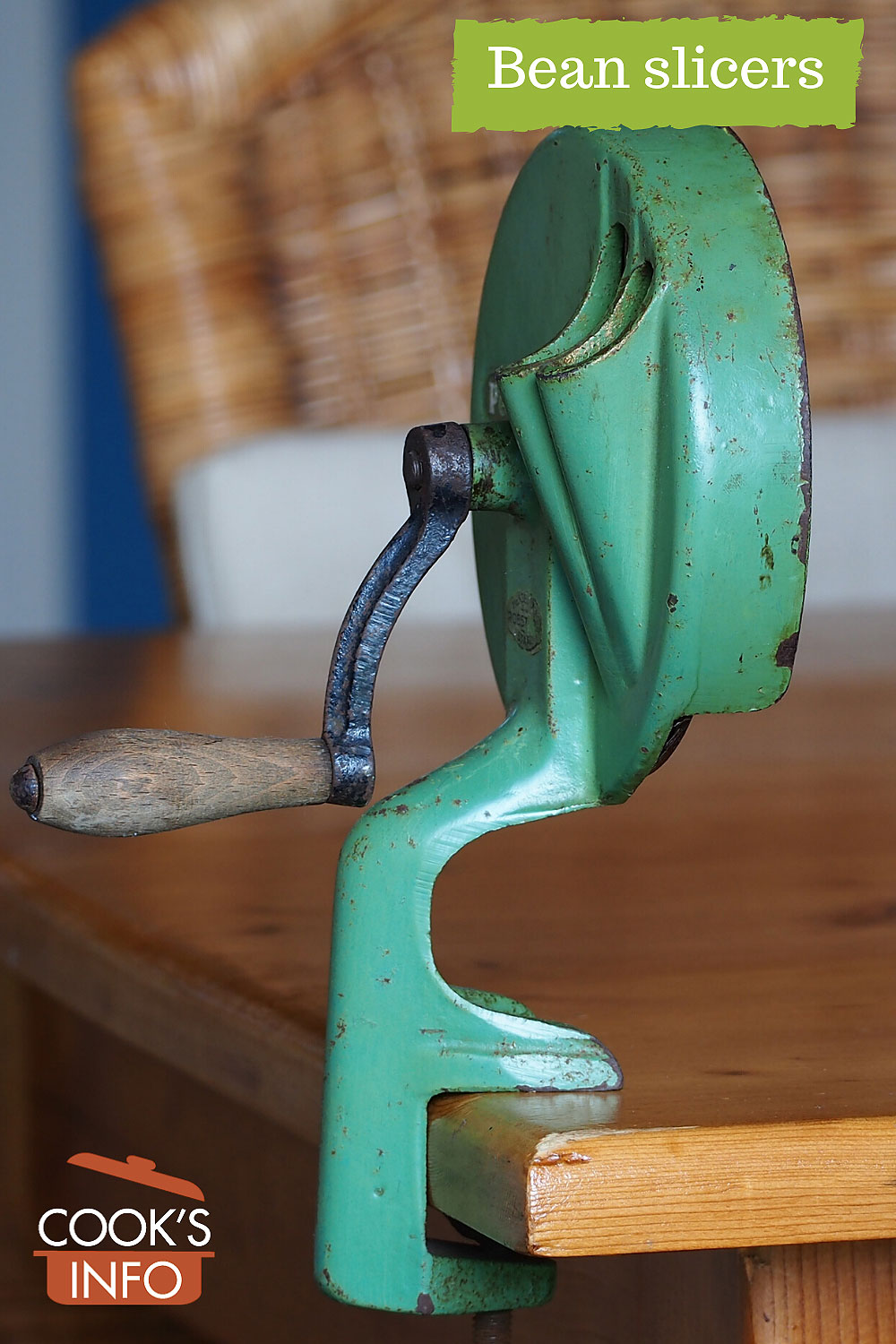 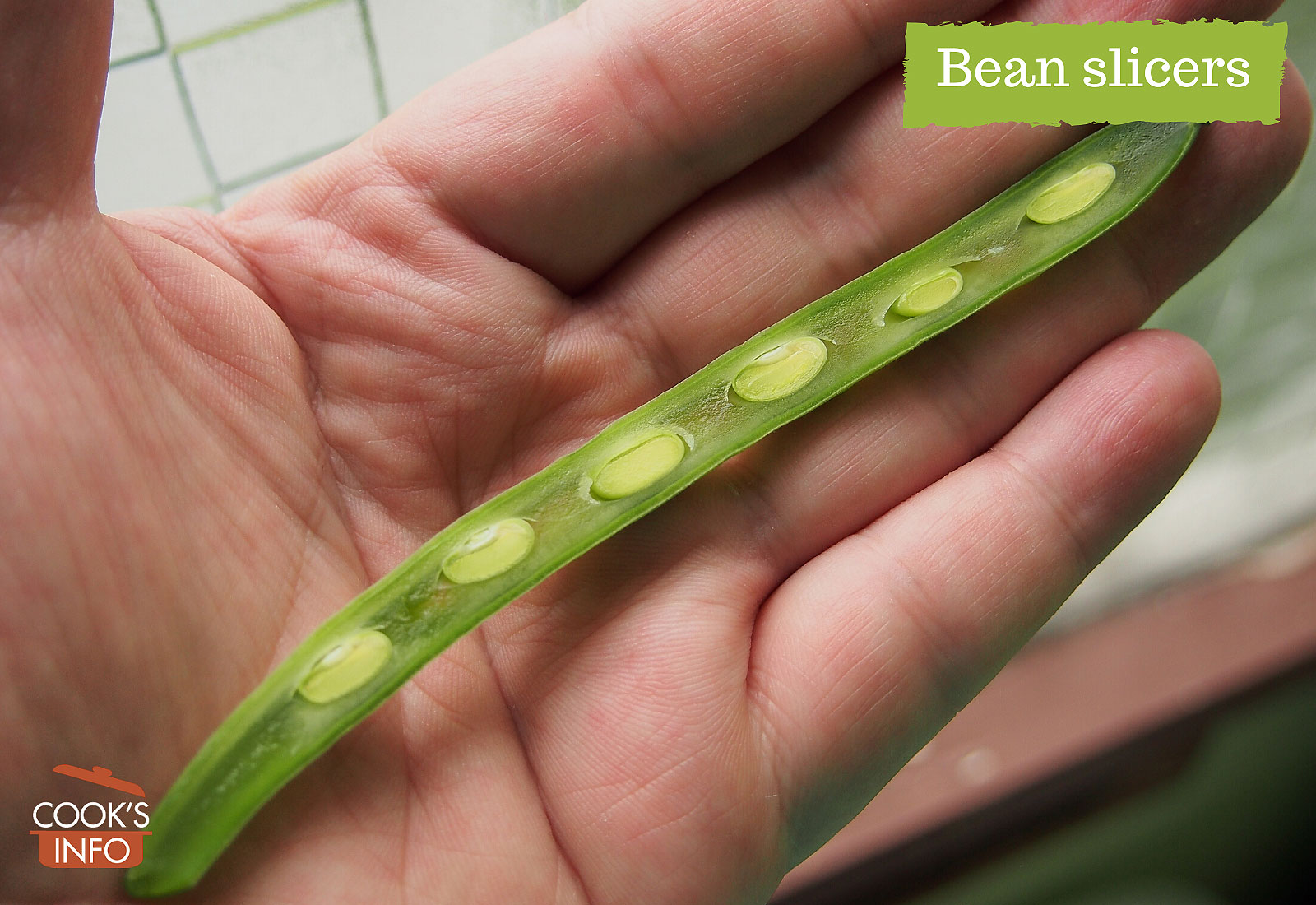 Bean slicers were invented in the 1860s:

“According to the media of that time, the bean slicer was newly invented in the 1860s, with the Batkins model being one of the first to be patented; however, it is the Spong model that remains the most iconic. James Osborn Spong, originally from Northampton, was educated in London and then quickly became a very successful entrepreneur of Spong & Co., specialising in household utensils. At one point the company was the biggest and the most successful of its kind, stocking the kitchens of the royal family and the rich and famous.” [1]Kay, Emma. Vintage Kitchenalia. Gloucestershire, England: Amberley Publishing. 2017. Google Ebook edition.

This web site generates income from affiliated links and ads at no cost to you to fund continued research · Information on this site is Copyright © 2022· Feel free to cite correctly, but copying whole pages for your website is content theft and will be DCMA'd.
Tagged With: Green Beans, Runner Beans, Slicers