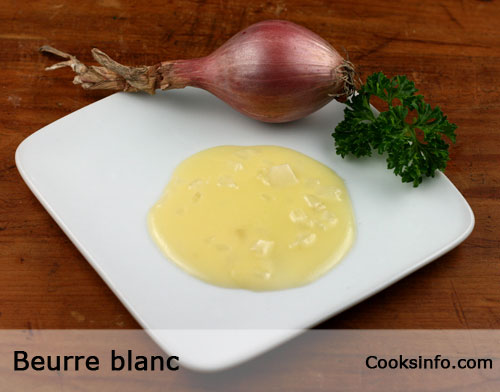 Beurre Blanc (“white butter”) is actually a sauce, not a type of butter. And it’s pale yellow, not white.

It’s a creamy, thick, but light-textured pale yellow sauce made from butter, shallots, white wine, and white wine vinegar. It has a slightly sweet, slightly tangy taste conveyed by a velvety, underlying richness.

The sauce is traditionally used with fish and seafood such as poached fish, coquilles Saint-Jacques, and shellfish in general. It’s also served with vegetable such as asparagus.

While many people add tarragon (or use wine vinegar flavoured with tarragon,) that is not actually part of the core “beurre blanc” sauce. Note that the core recipe does not contain egg or lemon or peppercorns, either, as a few variations do. It’s a very simple sauce with very few ingredients that is more about technique than ingredients.

You cook the shallots and the liquid until the liquid has reduced to a thick syrup (this much can be done in advance.) Then, over low heat, you start adding the butter, melting it and whisking it in. From this point on, it must never be allowed to get so warm that it even simmers. The temperature range to work in, for what it’s worth, is 37 to 49 C (100 to 120 F.) When the sauce is made, you season to taste with salt and pepper.

Some people like to stir in a small amount of cream for colour and consistency. This was popularized by the Joy of Cooking cookbook, but Irma Rombauer and her team didn’t just make this up. There’s more than one recipe in France for Beurre Blanc, and in Nantes, many people like to add a tablespoon of heavy cream as well. In Nantes, Beurre Blanc was reputedly first made locally under the auspices of a Madame Clémence Lefeuvre at the start of the 1900s for the Marquis de Goulaine at his château. One of her kitchen assistants was actually aiming to make a bérnaise sauce, but forgot some essential ingredients such as the egg and the tarragon. In the Nantes version, the shallots are strained out. In Anjou, France, the locals insist that Beurre Blanc should be made with the grey shallots they grow there, and the shallot should not be strained out. It was reputedly first served in Anger at a restaurant called “La Poissonnière”, to accompany pike.

In other areas of France, some people use all vinegar, some use all wine, some bit of both, some vinegar and water or vinegar and fish broth. Some people prefer to use unsalted butter, some to use “beurre demi-sel” (aka semi-salted butter.)

The ratio of ingredients for the sauce is usually something like:

Reheating the sauce can be difficult, as the emulsion can separate easily. Generally, cooks advise to either make it on the spot, or keep it warm in a thermos for up to two hours.

However, we’ve found a way to reheat it that seems to work for us. This tips are included in the Beurre Blanc Recipe.

The reduction of the wine and the vinegar to a thin, sweet and sour syrup hearkens back to Medieval cooking, and past that back to Roman tastes.

“Paul took me to a little bistro way over on the Right Bank, off the Avenue Wagram, called Chez la Mère Michel. The house specialty was beurre blanc nantais, a wonder-sauce used on fish. It is a regional, not classical, recipe, and the leading French cookbooks, from Carême right up through Ali-Bab, Larousse Gastronomique, and Curnonsky, were all extremely vague on the subject. I could find no complete and clear description of how to make beurre blanc. So I decided to do a bit of investigative reporting.

Walking into the restaurant, we met La Mère Michel herself: a small, white-haired capable woman of about sixty-two. She had come to Paris from Nantes, on the Loire River, in 1911….The little restaurant …. had survived quite nicely, largely on the strength of its beurre blanc — a thick, creamy sauce that is really nothing but warm butter held in suspension by an acidic flavor base of shallots, wine, vinegar, salt, and pepper…. the chef invited us into her kitchen to show us how she made her famous sauce in a brown enameled saucepan on an old household-type stove. I paid careful attention to how she boiled the acidic base down to a syrupy glaze, then creamed tablespoon-sized lumps of cold butter into it over very low heat.”