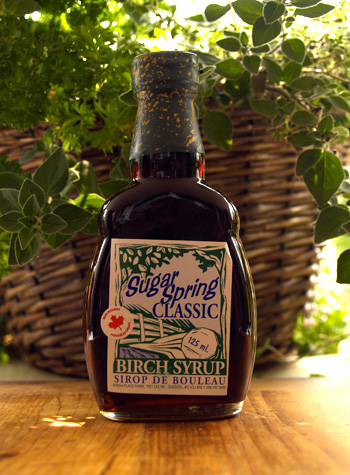 Birch Syrup is a syrup made from the sap of birch trees.

It is a dark, sweet syrup that is about 70% sugar, with a hint of a spicy flavour to it and a light caramel taste. Its slight bittersweet notes give it a more complex, less cloyingly sweet taste than maple syrup. Syrup made from some varieties of birch can have a faint wintergreen flavour.

The sap contains about 1 to 2 % sugar, depending on the birch tree it is from. The sugar is about half fructose and half glucose, with trace amounts of sucrose and galactose. The Western Paper Birch has a sugar content lower than most other birches, and so a higher amount of sap from it is required to make syrup. In general, though, about 100 to 150 US gallons of sap (375 to 570 litres) are needed to make 1 gallon (3 ¾ litres) of pure syrup. Some brands will add fructose to the harvested sap; these brands only need about 50 US gallons (190 litres) of sap to make 1 gallon (3 ¾ litres) of syrup, which therefore makes the syrup less expensive to produce.

The sap is harvested in the spring. A hole is drilled into the tree, and a plastic spout (called a “spile”) is inserted, with the flow out of the spout directed into either a plastic pail or plastic tubing. Plastic or ceramic buckets and tanks must be used, as the acid in the sap would interact with metal to give the syrup a metallic tang. A tree can produce 3 to 5 gallons (11 to 19 litres) of sap a day.

The sap flows out of the tree clear. Processing of it has to start within a day or it will start to ferment. It is simmered, to evaporate water out of it. This concentrates the flavour and sugar, and gives the syrup its flavour. It has to be simmered at a low temperature, because it will scorch easily owing to the high fructose content in it. Most producers now run the sap through a first stage of “reverse osmosis”, which removes 70% of the water before simmering even starts. This reduces the amount of boiling time required, and therefore reduces the chances of it scorching.

The season only lasts up to three weeks. The tapping stops when leaf buds appear on the tree’s branches because at that point, the syrup acquires a bitter taste.

Most commercial production is in Alaska. The Alaska Birch Syrupmakers’ Association was founded in 1993.

Birch Syrup is also made in British Columbia (Canada) from Paper Birch, and in Russia and Scandinavia from other species of birch.

Birch Syrup contains methyl salicylate, which gives it its taste. A few people can react to this compound.

Birch Syrup will not crystallize in storage, as Maple Syrup does.

This web site generates income from affiliated links and ads at no cost to you to fund continued research · Information on this site is Copyright © 2022· Feel free to cite correctly, but copying whole pages for your website is content theft and will be DCMA'd.
Tagged With: Syrups