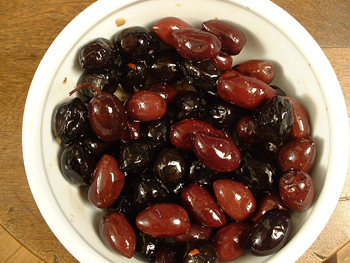 Contents hide
Black Olives are olives that have been left on the tree to mature and ripen. They are usually picked late in the year, November to December, sometimes into January. Black is just a generic term. They will seldom be absolutely jet black. You will see shades of deep purple, black, reddish-brown or brown. Many will even be hues of dark purples or deep olive greens that wouldn’t be out of place on army camouflage.

Black Olives don’t need to be cured, as green olives do. They will just be brined or salted to season and pickle them. They do, though, have to be pickled longer than green olives, because they didn’t have the curing process. They are usually ready to eat or package 70 days after harvest.

They have a sweeter, fuller flavour than green olives, though they lack the tartness and zing. Their texture will be softer.

They can’t be mechanically pitted, as they are too soft to stand up to the machines, so they are almost always sold with the pit still in. At least, that’s what the industry says — though somehow, the raisin industry has figured out how to sell pitted raisins, causing raisin pitters to disappear from kitchens around the start of the 1900s.

Black olives are sold in jars, tins or in plastic tubs at deli counters.

These are very different from the Californian Black Olives sold in North America. Those are green olives, dyed black.

Black Olives are the olives most often used to make tapenade.

Pitting them is quite time consuming. There are three ways. Which way works depends on what type of olive — some cling more to their pits — and, on how sore your hands get after a few minutes of doing this.

You might have to use a combo of all three on the odd stubborn olive.

Whichever way you go, you’ll find yourself thinking there’s got to be a better way, but astonishingly no one seems to have come up with anything else yet. Mind you, you can always pawn the task off on a friend.

If a recipe calls for “ripe olives”, what it means is “black olives.”