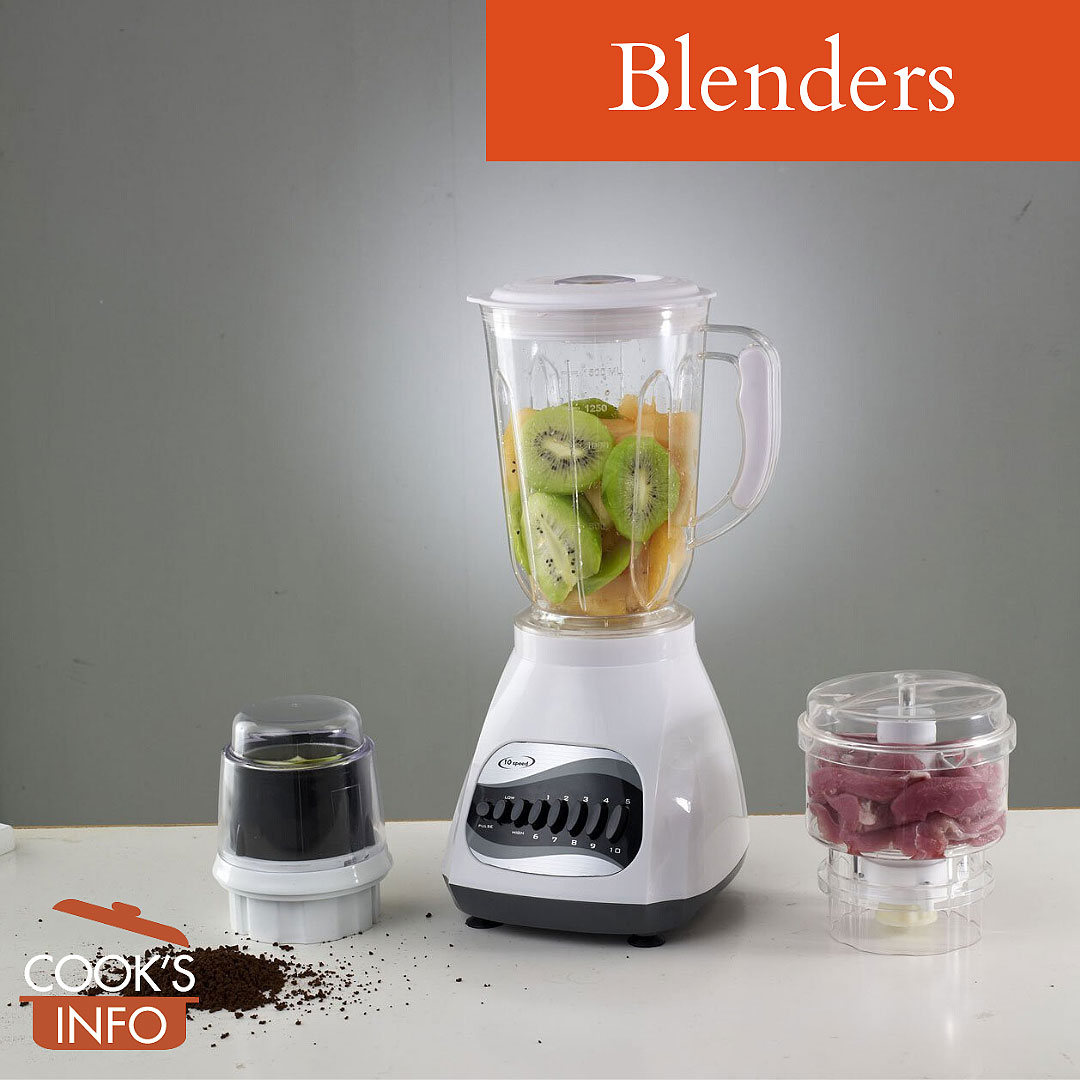 A blender is an electrical kitchen device used used for blending, puréeing and emulsifying.

Blenders have never quite been supplanted by food processors, because food processors aren’t as good at the really fine blending required for items for soups, shakes, drinks, etc, and items such as mayonnaise that need emulsifying.

On the other hand, a blender really can’t be used for chopping, as a food processor can be: a blender pulverises and mashes food to a pulp.

There are two main types of blenders now, countertop blenders, and hand-held blenders. 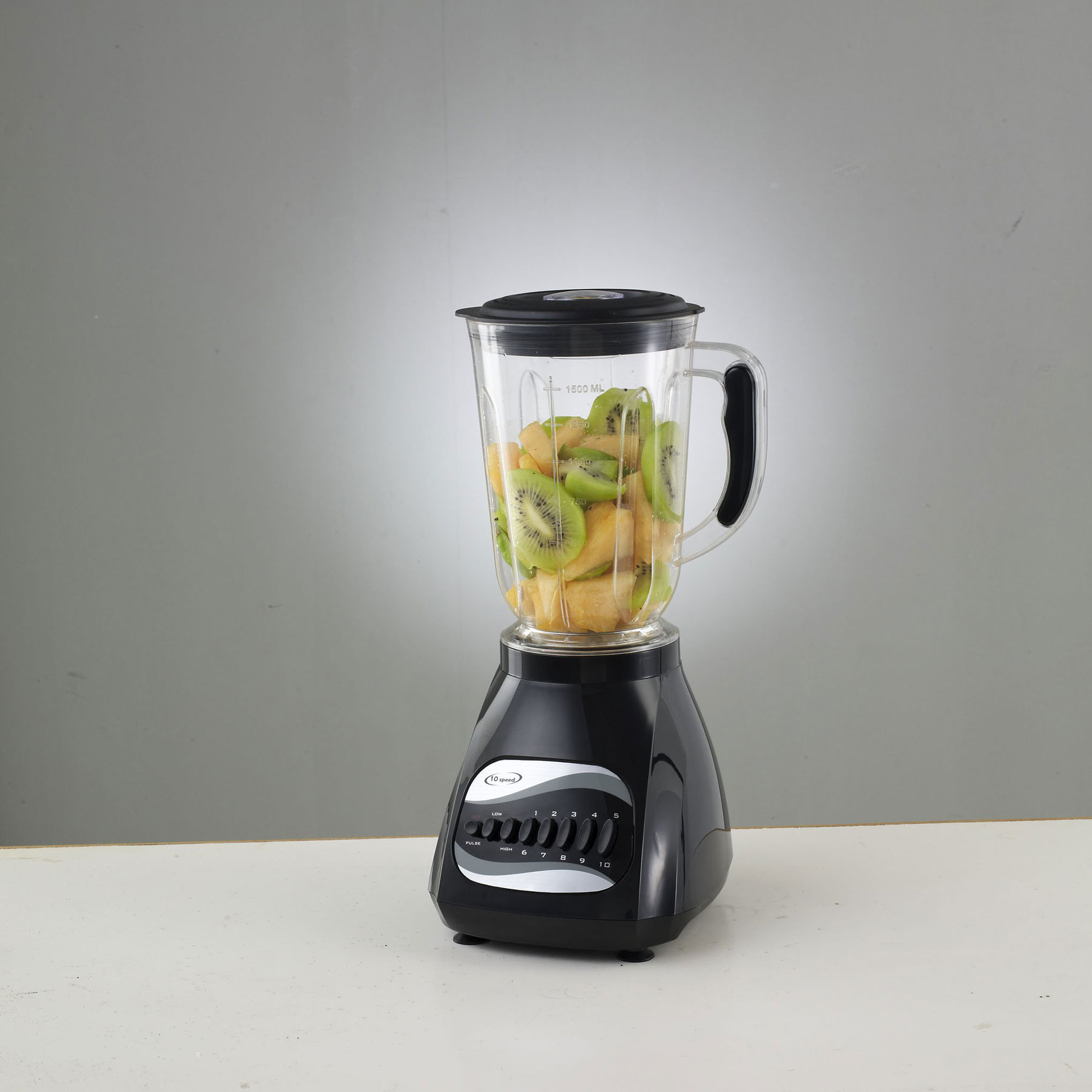 This is the most common type of blender. If someone says “blender” without specifying, this is the type they mean.

A countertop blender is an electrical machine that has essentially five parts:

Generally, all parts except the electric base are designed to be dishwasher-safe.

Jugs come in glass or plastic, and are transparent so that you can see what is going on. Glass jugs are more expensive, and heavier, but last longer, and stay better looking longer. Some models come with mini-jars that you can swap in for the jug for small jobs. A very few models offer stainless-steel jugs which, though they can look great, don’t let you easily monitor your progress.

Most jug lids have a hole in the middle of them for easy addition of further ingredients while the blender is running (because taking the whole lid off can allow splatter to escape.) They will also come with a little cap to cover the hole during blender operation to prevent splattering out through it. You remove the lid entirely to pour out your blended ingredients when done.

Blender bases come in metal or plastic in many different colours and finishes. Some bases make a horrible noise during operation, like a jetcraft engine. Some bases have non-skid pads at the bottom, which actually aren’t as effective at gripping work surfaces as suction cups. Speed choices and how they are set vary. Some use buttons, some a simple dial, some (which offer only a single speed) just use a flip-switch. Some people feel that all you really need is two choices, pulse and blend.

The power generally varies anywhere from 300 to 1000 watts. Some people feel that 500 watts, which tends to be an average for jug blenders, is all you really need 99% of the time — that more power beyond that just means more unnecessary loudness during operation.

Some blades consist of four separate blades; some have six. 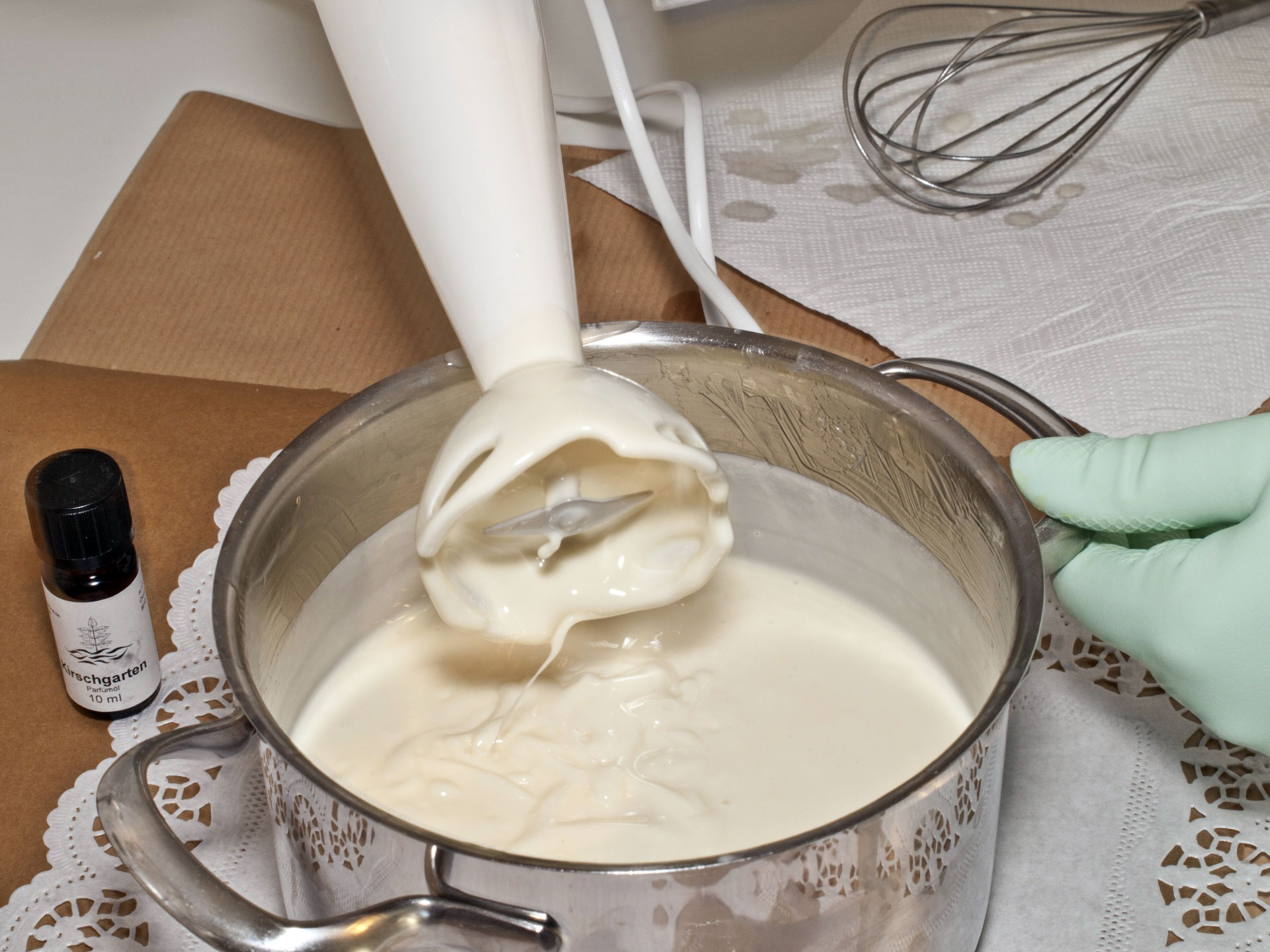 There are hand-held blenders as well, in which the blending blade is at the bottom of a hand-held baton. To use one, you submerge the bottom of the baton in the liquid to be blended, and turn the device on. You move the baton around in your liquid, to make sure all the edges and stray bits get liquidized — remember, you take the blender’s blade to the stuff needing to be pulverized, whereas in a jug the centrifugal motions draws (ideally) the stuff to the blade.

Some people prefer the hand-held type of blenders because while a jug one is faster at the actual blending part of the undertaking, they feel that having to wash the jug eats into any time savings otherwise gained by using a jug blender (though probably many people just sling it into the dishwasher.) While this is true, there is also a bit of wash-up involved of the bottom part of the baton.

Hand-held blenders are often not as effective as a jug blender is at blending stringy items such as green beans and asparagus for soups. And they can be less forgiving when emulsifying. For instance, when making a Caesar salad dressing in a jug blender, you can usually get away with ignoring the step by step directions and just toss all the dressing ingredients in at once. With a less-powerful hand-held blender, if you do this, you may not get the creamy, emulsified solution that such a dressing should turn out to be.

Most hand-held blenders seem to have a power of 100 watts; some people say to look for more than that, if you want a better shot at blending stringy stuff, etc.

A variation on the hand-held blender is the “container” blender. The hand-held part actually fits into a hole in the lid of a container. On the underside of the lid, you attach the correct attachment for the job at hand, then put the lid on the container, and turn on the handle’s blender engine.

These are usually only suitable for very small jobs, as the containers aren’t that large. On the other hand, some jug blenders aren’t good at blending small quantities, just splashing them around inside the jug, particularly if they are straight-sided jugs.

Special blenders are also made for laboratory use. Their engine casings are more tightly sealed so that no motor aerosols at all are released, as these can contaminate lab cultures. Most also allow the speed to be set in terms of “rpms” (“rotations per minute.”)

Laboratory blenders can be used in home kitchens but they are often four times the price or more, and may not have other features more desirable for home use.

Not all blenders cope equally well with stringy fruit, vegetable fibres or stalks of items such as watercress. Nuts can get caught under the blades of some blenders — better Blenders will be able to process them out. Not all blenders process the pips in fruit such as raspberries and strawberries well.

Some of the more powerful Blenders can crush ice (but trying to do this in a less powerful one may just burn out the engine.)

By 1910, electric blenders were being made of the type that we would call milkshake blenders now — a pedestal housing the motor and gears, an arm jutting out from it at the top, and down from it coming the blending blade. You inserted a tall canister up and under the blade, and turned the power on. The Hamilton Beach Company (founded in 1910 by Frederick J. Osius, L.H. Hamilton and Chester Beach) patented a design for one of these stand blenders in 1911. They called it the “Single Spindle Drinkmaster.” Hamilton Beach’s first products, though, were actually a portable vacuum cleaner, an Electric Fan, and a Vibrator for women (sic). Osius and Beach were both from Racine, Wisconsin.

The concept of an electric blender with a spinning blade at the bottom of the jug was invented in 1922 by a Stephen J. Poplawski, also of Racine, Wisconsin. He was the owner of the Stevens Electric Company. He sold his style of blenders to drug stores, with the idea that the machines would specifically make Horlicks malted milk shakes better and easier to make. His company already made the spindle type ones, but they couldn’t quite get at the lumps of malted powder at the bottom so he asked himself if he could design one with the blades at the bottom.

His design was improved by Frederick Osius of the Hamilton Beach company. Osius patented his improved design in 1933, calling it the “Miracle Mixer”, but his design had problems. It leaked through the bottom, and sales were dismal. Osius wanted more money to spend on development. so in 1935, he turned to a band leader named Fred Waring (9 June 1900 to 29 July 1984, who headed up the band called “The Pennsylvanians”) for financial backing, because he knew that Waring was interested in new gadgets. Waring gave Osius $25,000 to work with, but after having gone through the money in six months, Osius still hadn’t solved the leaking problem. Waring was hooked on the blender idea though, and decided to jettison Osius.

Waring handed the leaking problem over to an engineer (named Ed Lee) who was able to solve it. He commissioned a German-born designer, Peter Muller-Munk, to come up with the base’s sleek design in chromium. And with Muller-Munk, Waring decided to replace the metal jug with a glass one that allowed people to watch the action.

He set up the Waring Corporation to sell his blenders. Waring had his first working model ready for show at the National Restaurant Show in Chicago in September 1937, selling at the then premium price of $29.75 (you could get hamburgers for a nickel.) He traded on his fame to flog them everywhere, calling them the future of drinks in America. In 1938, he renamed his machine to the Waring Blendor (sic — spelling Blendor that way was Waring’s idea.) Owing to the price, most sales were commercial, to bars and restaurants.

Production was halted in 1943 owing to wartime restrictions. In 1944, Waring sold the company to a man named Hazard Reeves, who managed to popularize it in homes after the war. Reeves gave him $15,000 as a downpayment, with $250,000 to come after the war ended.

Waring headquarters was in New Hartford, Connecticut. It’s not clear whether Waring passed through further hands after those of Hazard Reeve’s, but by the early 1960s it was owned by the Dynamics Corporation of America (before 1962), which was bought by CTS Corporation, which then sold the Waring products line to Conair (sale completed in May 1999.)

In 1946, a man named John Oster bought the Stevens Electric Company, and renamed the original Stevens blender to the “Osterizer®.” The Osterizer brand was a major competitor to the Waring brand.

By the 1970s, manufacturers competed to distinguish their blenders by the number of buttons on the front. 4, 8 and even 16 buttons appeared at one point. 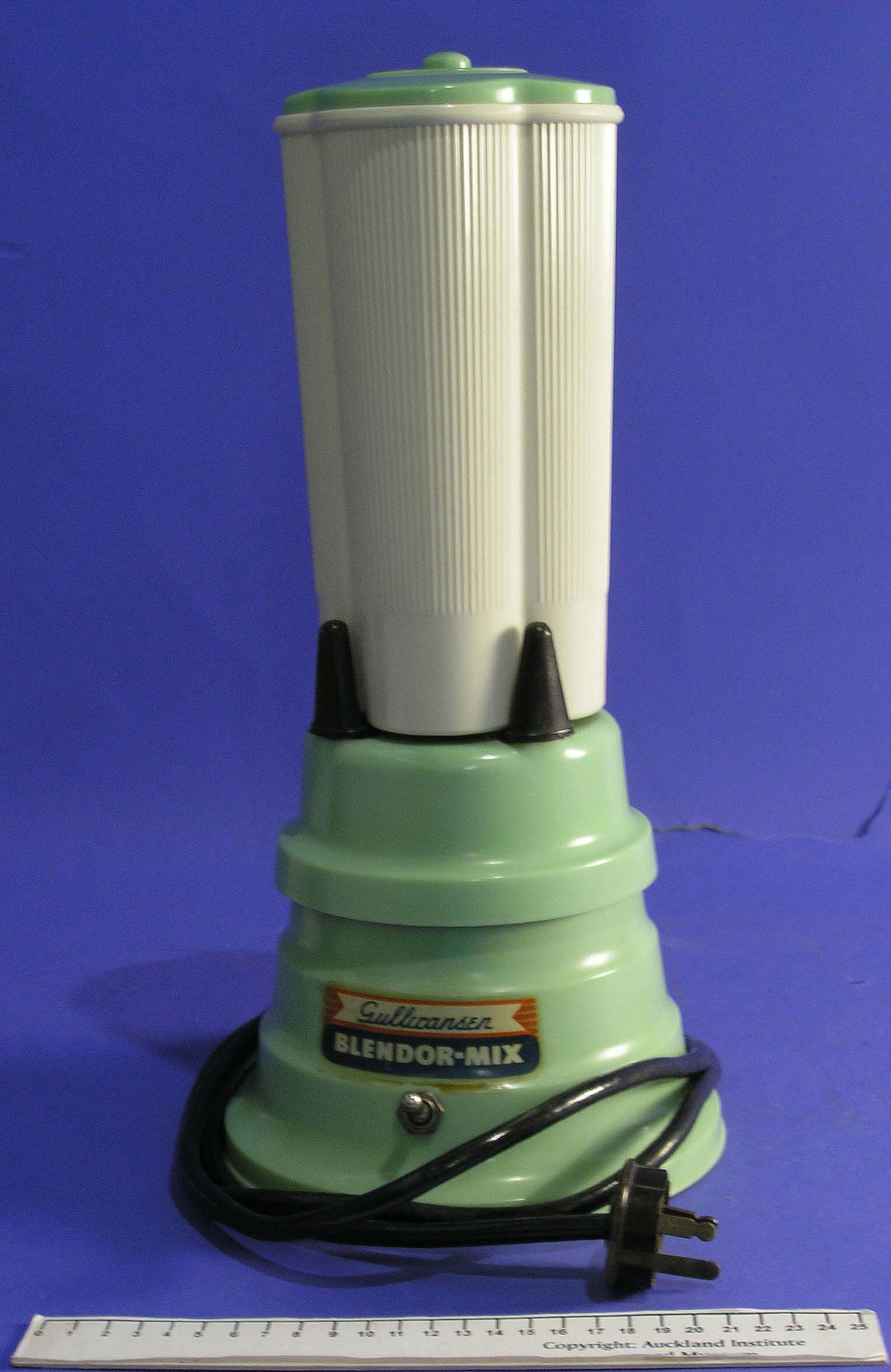