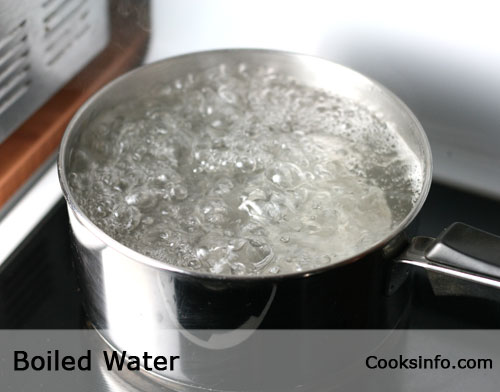 Boiled water is water that has had heat applied to it until it has been boiled for a varying period of time.

As water boils, gases are driven out of it, including oxygen. This is why tea purists always insist on boiling freshly drawn water, rather than water which has been boiled over and over again.

When you add salt to boiling water, it suddenly seems to “flare up”, making it seem as though it’s boiling faster. What’s happening, though, is that you’re providing a substance around which the freed up gases in the water can bind (it’s called “nucleation points.”)

You can get various “instant hot water” devices for your kitchens, ranging from counter-top models to additions to sinks, that will produce water that comes close to boiling temperature, generally somewhere in the range of 190 F / 88 C. This is fine for things like instant soups, instant coffee, instant oatmeal pouches, instant hot chocolate, etc.

Water that has possibly been contaminated by bacteria can be made safe by bringing it to a rolling boil, and holding it there for a given period of time. Most public health authorities in North America say three minutes, though some other sources say 10 minutes is the surest time that will cover all altitudes. Then store refrigerated for up to 3 days in a covered container. The container, of course, needs to be sanitary.

Salt in water raises the temperature at which it boils, but then, in effect, it’s no longer water, but brine.

Early Victorian geographers would boil water to measure the altitude of mountains. By measuring the temperature at which it boiled, they could then calculate the altitude. But they didn’t always get consistent results, because the water they used from different sources varied in mineral content.

This web site generates income from affiliated links and ads at no cost to you to fund continued research · Information on this site is Copyright © 2022· Feel free to cite correctly, but copying whole pages for your website is content theft and will be DCMA'd.
Tagged With: Water