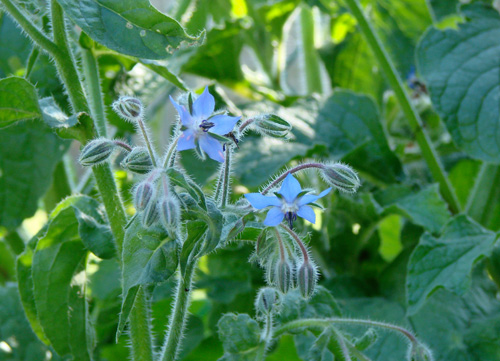 Borage is an herb plant that grows up to about 70 cm (2 ½ feet) tall, with a spread of about 60 cm (2 feet.) The plant won’t win any beauty contests — it has wrinkled oval leaves with stiff, white prickly hairs — but it develops beautiful flowers which are usually blue, sometimes pink or lavender. Though borage is an annual, it self-seeds, and will propagate easily in a garden.

The leaves, stem and flowers have a cucumber-like fragrance and flavour. The flowers are probably used more often than the leaves or stem, owing to the hairs on these.

Borage is usually used fresh, as it doesn’t dry well.

If using borage in a cooked dish, it should be added at the end as cooking will destroy its flavour.

It can be steeped in water, then mixed with lemon, sugar and wine to make a refreshing summer drink. In older times, a few sprigs were often tossed into cool glasses of wine or cider.

Its blue, star-shaped flowers are used to garnish salads and cocktails, and most notably a glass of Pimms.

When using the leaves in salads and soups, chop the leaves very finely first as they have stiff, white prickly hairs that will irritate the throat. Sometimes people blanch them first to make them softer.

Originally from the Middle East, borage was introduced throughout Europe by the Romans as a cultivated plant. The Romans believed that borage chased sadness away. (Or at any rate, they noticed that was the result when you served borage blossoms in glasses of wine.) A Roman word for borage, Euphrosinium, referred to the belief that it induced “euphoria” or joy.

Over the millennia, borage has escaped from gardens and naturalized itself in many locations.

People used to preserve borage flowers by candying them, as the candied flowers were thought helpful to invalids.