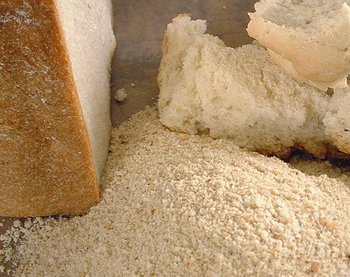 Bread Crumbs can be made from any type of bread.

There are two types of bread crumbs, fresh and dried.

Which is used when depends on the effect that is wanted.

See separate entries for fresh and dried bread crumbs, with appropriate substitutes and equivalents for each.

You should never have to buy bread crumbs, unless you have the kind of family that can’t keep a slice of bread in the house. But even large, big-eater families will toss loads of stale bread in the garbage one day, and then the next day at the supermarket toss cartons of orange-coloured dried bread crumbs in their grocery trolleys. If you know bread is going stale and you’re really not going to eat it, don’t ponder its place in the universe until it goes mouldy: set it out to dry for breadcrumbs (or make fresh breadcrumbs and freeze them), or failing either of those, at least give it to the birds.

There’s no reason why bread crumbs have to be made of white bread, or for that reason, just bread. You can add stale pitas and tortillas into the batch. Raisin bread, though, might be a bit more problematic.

A Boston man named Joseph Lee (19 July 1849 to 1905) received US patent number 540,553 on 4 June 1895 for developing a machine that turned leftover bread into fresh bread crumbs, for use in restaurants and hotels. He sold rights to the patent to the Royal Worcester Bread Crumb Company of Boston.

The Roman word for crumbs in general was “mica”.