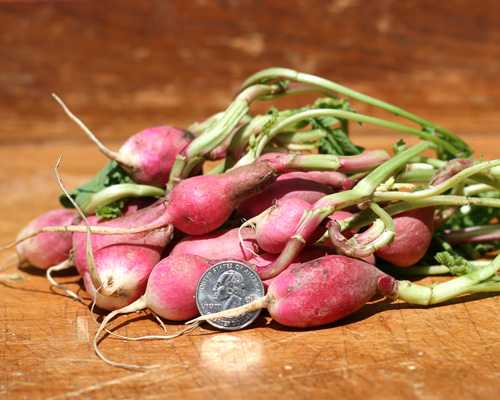 These radishes are a red, oblong radish tapering to a whitened tip. They are generally about 4 to 5 cm long (1 ½ to 2 inches), though there is a “long” variety that grows 7.5 cm long (3 inches.) They are very mild and crisp. They are ready to harvest 3 to 4 weeks after sowing.

In France, they would be eaten as a mid-morning snack, rather than for breakfast necessarily. The Pennsylvanian Dutch also eat radishes for breakfast, as do the Dutch, Japanese, Koreans and Russians.

This particular variety of radishes was popular in markets in Paris.

They were popular with Victorians in England for breakfast.

It was brought to America about 1870; by the late 1880s, it was being offered in American seed catalogues.

The Romans would eat radishes for breakfast sometimes (though breakfast was not a big meal in the Roman world.) The Victorians would have them for breakfast with potted shrimp, toast and cress.

The name likely comes from the Victorians having used them at breakfast; with the word “French” tacked onto the front to designate the origin. Unfortunately, confusingly, in today’s mind the combination seems to imply that the French ate them for breakfast, which was not the case.

This web site generates income from affiliated links and ads at no cost to you to fund continued research · Information on this site is Copyright © 2022· Feel free to cite correctly, but copying whole pages for your website is content theft and will be DCMA'd.
Tagged With: Breakfast, Radishes, Roman Food