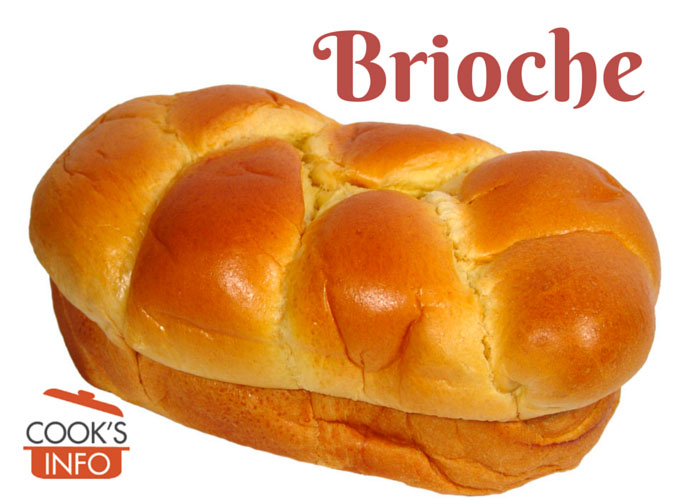 Brioche is a French bread made from flour, salt, yeast and water, but enriched with eggs and butter. Sugar is often added, and the water is often replaced with milk or cream. The result is a soft, buttery, slightly sweet and rich dough approaching the category of pastry. Some recipes will call for additional flavouring such as Eau de fleur d’oranger, vanilla or vanilla sugar.

An egg wash may be brushed on just before baking.

When baked, the crust will be a golden brown and somewhat flaky. The inside of the loaf will be tender and light, but rich.

Brioche is very often made commercially as individual rolls. To make the rolls, the dough is risen and baked in those round, Brioche moulds with flared, fluted sides that in homes often end up as dusty decorations on kitchen walls.

There are also round and long Brioches, and a braided one (see “Brioche Vendéenne”.)

Unbaked brioche dough is somewhat slack and sticky but that is how it is supposed to be.

The Brioche rolls with the top knots are made by first reserving some dough before making larger rolls. The larger rolls then have a hole pressed into their tops with a thumb, almost all the way through. Pieces of the reserved dough are formed into tear-drop shapes, with the pointier bit inserted into the holes in the larger rolls.

If you don’t have Brioche moulds (and they may not be worth buying, unless you intend to make Brioche rolls all the time), just use muffin tins. Or, make a tressed loaf instead.

Try brushing rolls and loaves with a eggwash before you set the formed rolls and loaves out for the final rise. It will keep them from drying out, and enhance the flavour. Brush again with egg wash just before baking.

The phrase, “Qu’ils mangent de la brioche” comes from Book 6 of Jean-Jacques Rousseau’s Confessions — written in 1767 or 1768. He attributes the phrase to “a great princess”. In fact, Rousseau first told this story to people in 1740, saying that it was an Italian princess. Marie-Antoinette didn’t even arrive in France until 1770, and wasn’t even born yet in 1740.

And whoever did say it, it actually made sense. Back then, there was a law in France that if ordinary bread was sold out, fancier breads such as brioche then had to be sold at the same price as regular bread.

Some have even mused that the idea originally came from an event related in a letter written in Latin by John Peckham, Archbishop of Canterbury from 1272 to 1292. What Peckam actually writes, however, is that because the deacon and sub-deacon of a rich church in Lichfield were so poor that they were begging for bread, that they should eat at the Vicar’s house, and that the Vicar would be provided with extra money per year to allow for this.

The word Brioche comes from the Old French “broyer” or “brier”, meaning to knead.

This web site generates income from affiliated links and ads at no cost to you to fund continued research · Information on this site is Copyright © 2022· Feel free to cite correctly, but copying whole pages for your website is content theft and will be DCMA'd.
Tagged With: Brioche, French Breads, French Food, Sweetened Breads