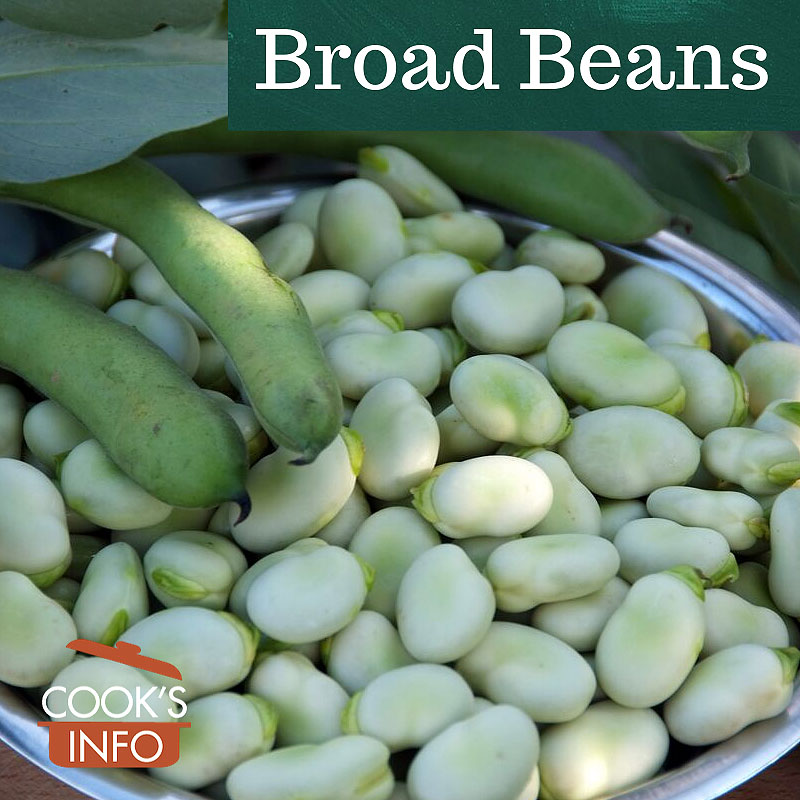 Broad beans (aka fava or faba beans) vary in shape and colour, the most commonly-sold ones being brown. They grow in large pods that hold around five beans per pod.

The beans are similar in shape and texture to Lima beans, without being as starchy.

Some people consider these the meatiest-tasting beans.

You can generally buy them fresh and still in the pod, or podded and dried. Young beans can be cooked in their pod and eaten pod and all, or you can pod them, and serve them uncooked in salads or antipasti.

As the beans get older later in the season, the beans must be “shelled” out of the pod, plus have the skin removed on each bean. 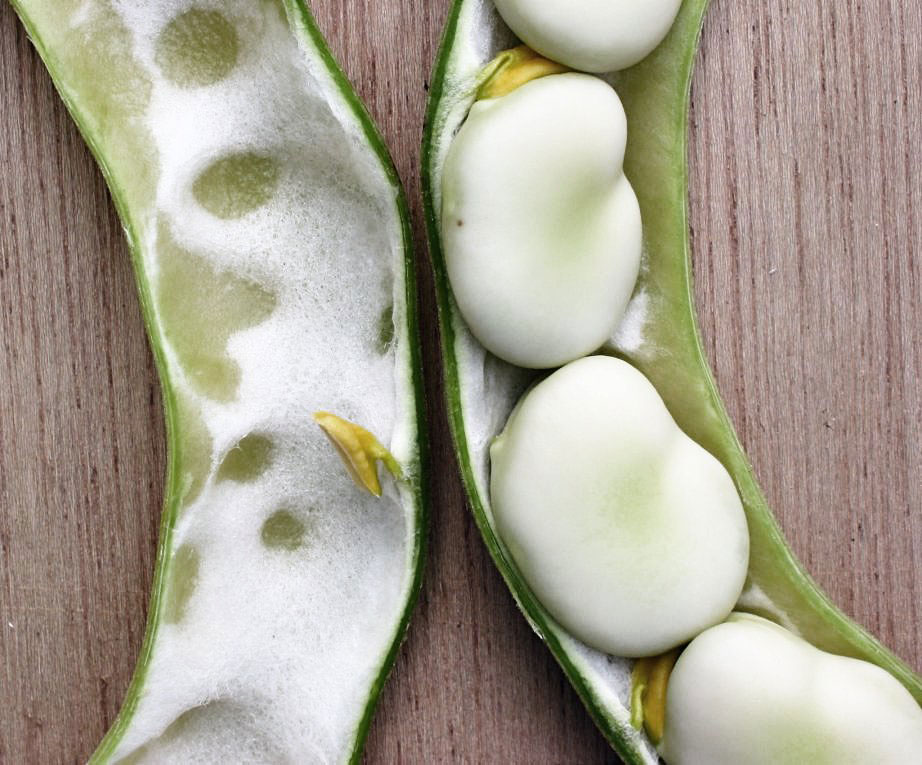 Broad beans do not mash easily; when mashing, use either a food processor or a mortar and pestle.

When you are cooking broad beans with other items (stews or casseroles, for instance), allow a longer cooking time than you would for other beans. Never salt the water when boiling as it will toughen the skin.

Simmer on stove for two to three hours.

Older beans, indicated by a black line on them, are better when the toughened skin on each bean has been removed. First, remove the beans from the pods, then blanch the beans in boiling water for 1 minute. After this, the tough skin around the individual beans will slip off more easily by pinching the beans. 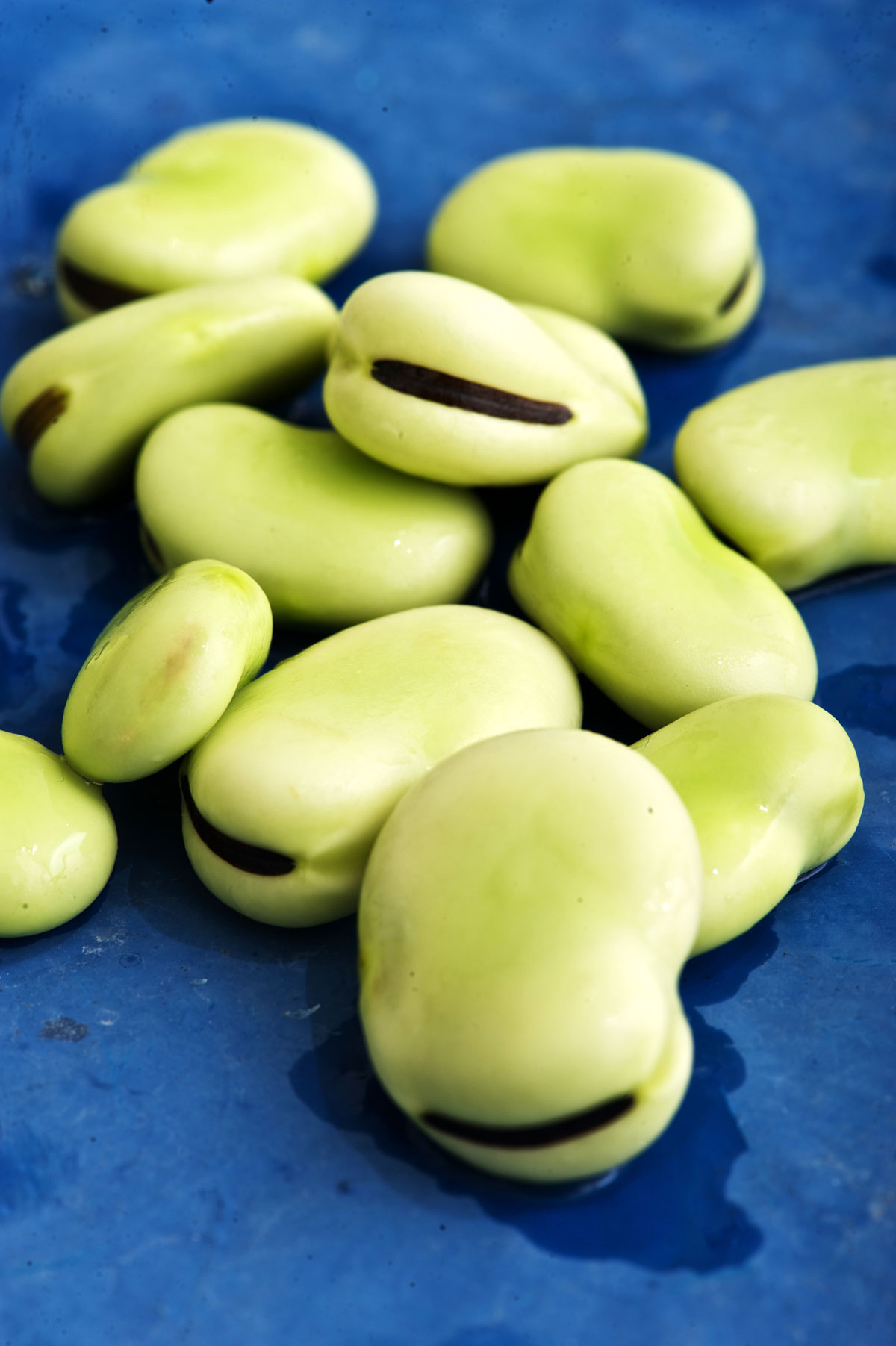 Some people of Mediterranean descent are have a hereditary condition known as “favism” which causes theymt to react in various degrees of severity to mature broad beans, so it would be wise to try just a few initially. [1]”Favism, an inborn error of metabolism, affects up to 35% of some Mediterranean populations and about 10% of American negroes. In sensitive people, ingesting (or even inhaling the pollen) of broad beans, or fava beans (Vicia faba), causes the breakdown of red blood cells (an acute hemolytic anemia.) The symptoms are dizziness, nausea and vomiting, and sometimes a high fever and collapse, followed by severe anemia. There is no known way of processing broad beans to remove or inactivate the substances that cause favism; hence, people who are susceptible to this type of hemolytic anemia should avoid broad beans.” — Ensiminger, Marion Eugene et al. Foods & Nutrition. Boca Raton, Florida: CRC Press. Vol 1. 1993. Page 275.

Apparently people with Parkinson’s Disease will want to consult a physician before adding broad beans to their diets. 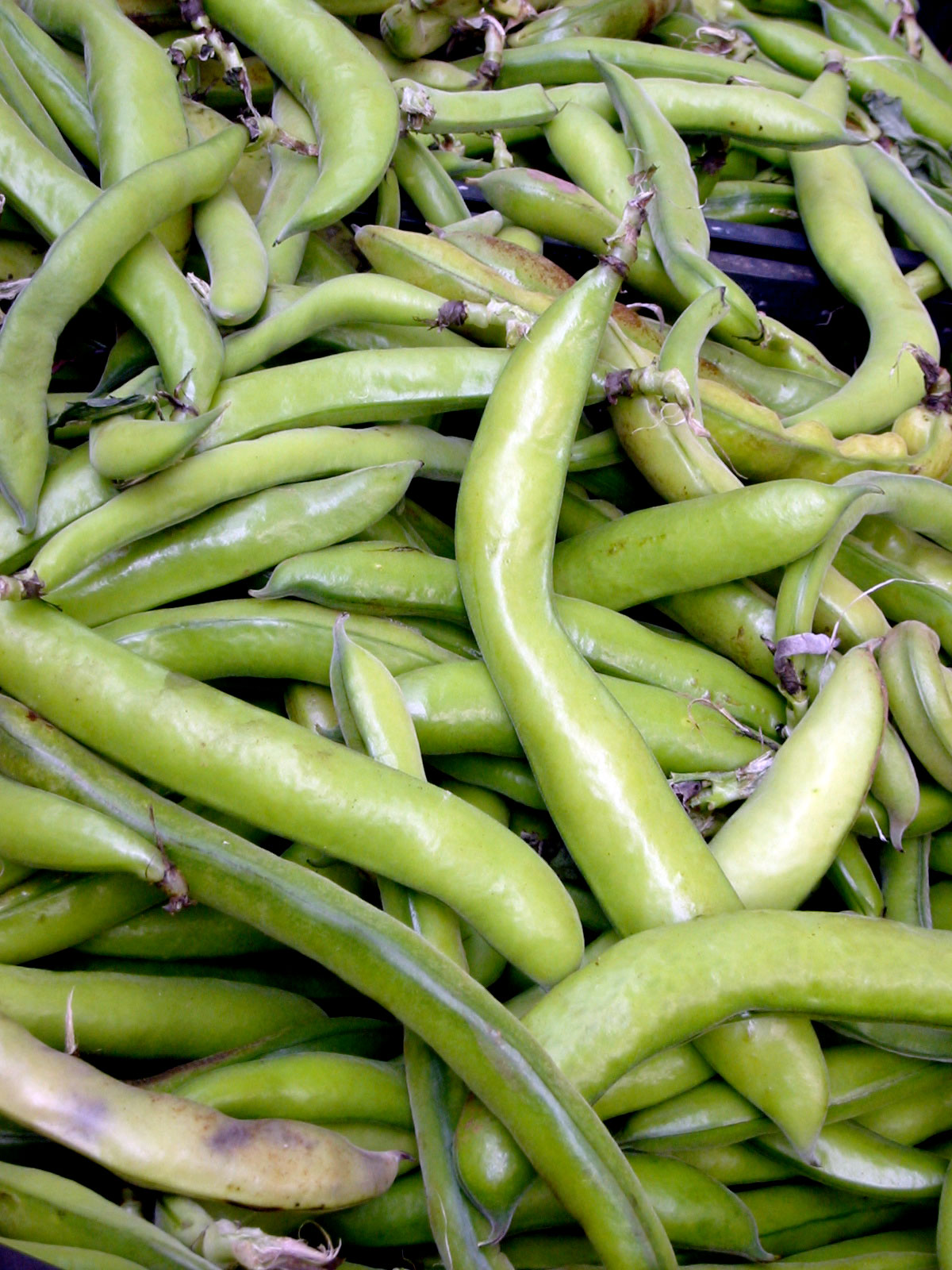 To freeze, shell older broad beans or cut young bean pods into 2 to 3 cm (1 inch) pieces. Blanch for 2 minutes, plunge into cold water to cool quickly, pack and freeze for up to 12 months. To use, cook from frozen in boiling water for 5 to 8 minutes.

The ancient Egyptians used broad beans, as did the Greeks and Romans. There is a surviving recipe for a purée of broad beans with cumin, coriander, olive oil and liquamen (the fish sauce that Romans were passionate about). The Italians still make a broad bean purée called “favetta”.

One account of the death of the Ancient Greek philosopher, Pythagoras, has him being caught by a mob at the edge of a broad bean field, which he was too terrified to enter to escape through. Some have theorized that he had the hereditary condition now known as “favism” that caused him to react badly to the bean or even the plant [2]Ibid.), and thus have developed a pathological fear of the beans. This may have been, they hypostulate, why he taught his followers to avoid all beans in general. 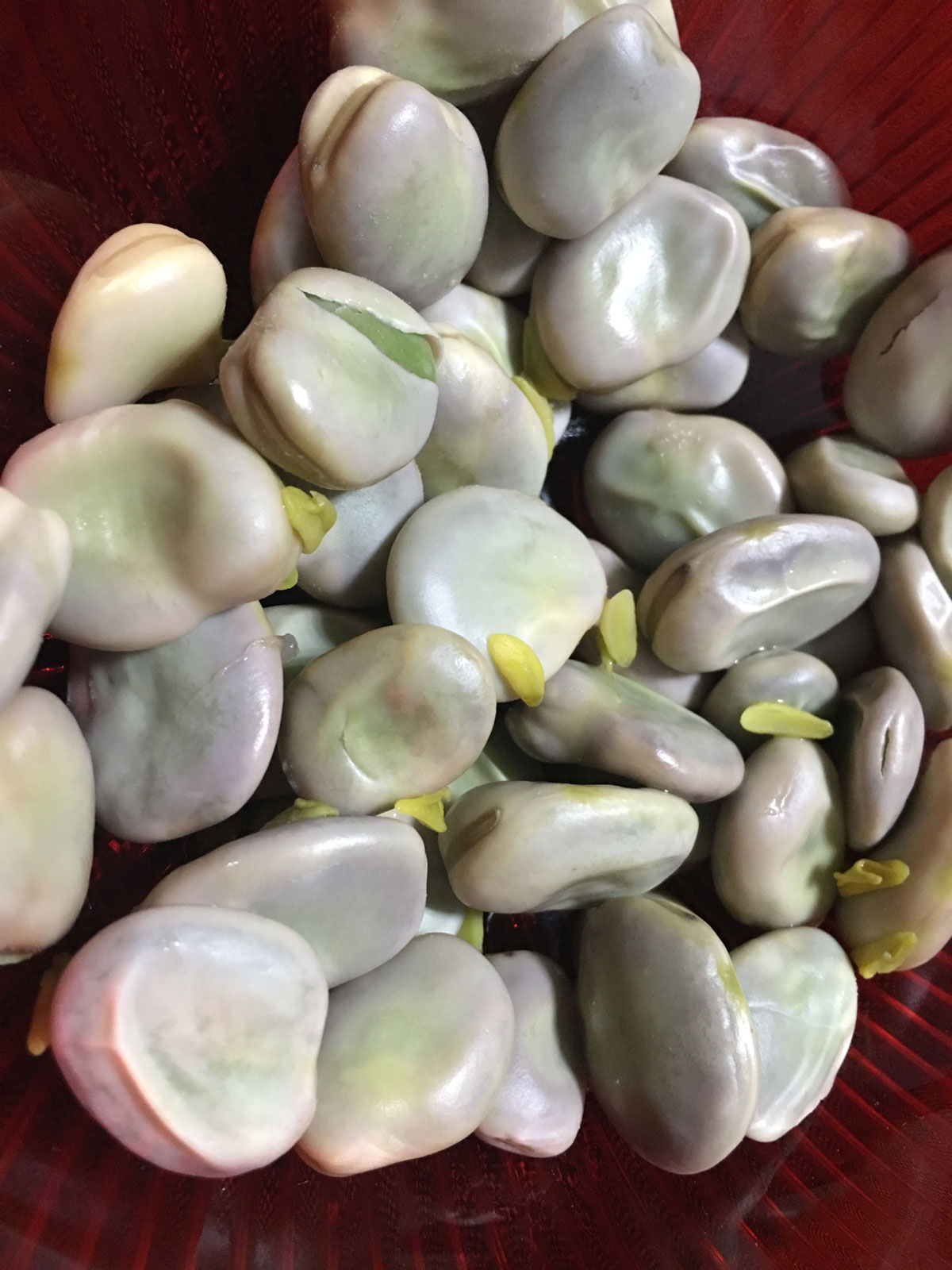 The ancient Greeks considered broad beans unlucky. The letter from the alphabet, theta, which looks like this θ, was the first letter of their word for death, “thanatos”. Greek juries would just mark θ on their ballots when they were voting to condemn a prisoner to death. Broad beans got associated with this, and thus the association with being unlucky, because the Greeks thought that the markings on the plants leaves resembled θ. No doubt the fact that some Mediterranean people are allergic to broad beans helped this death association along. 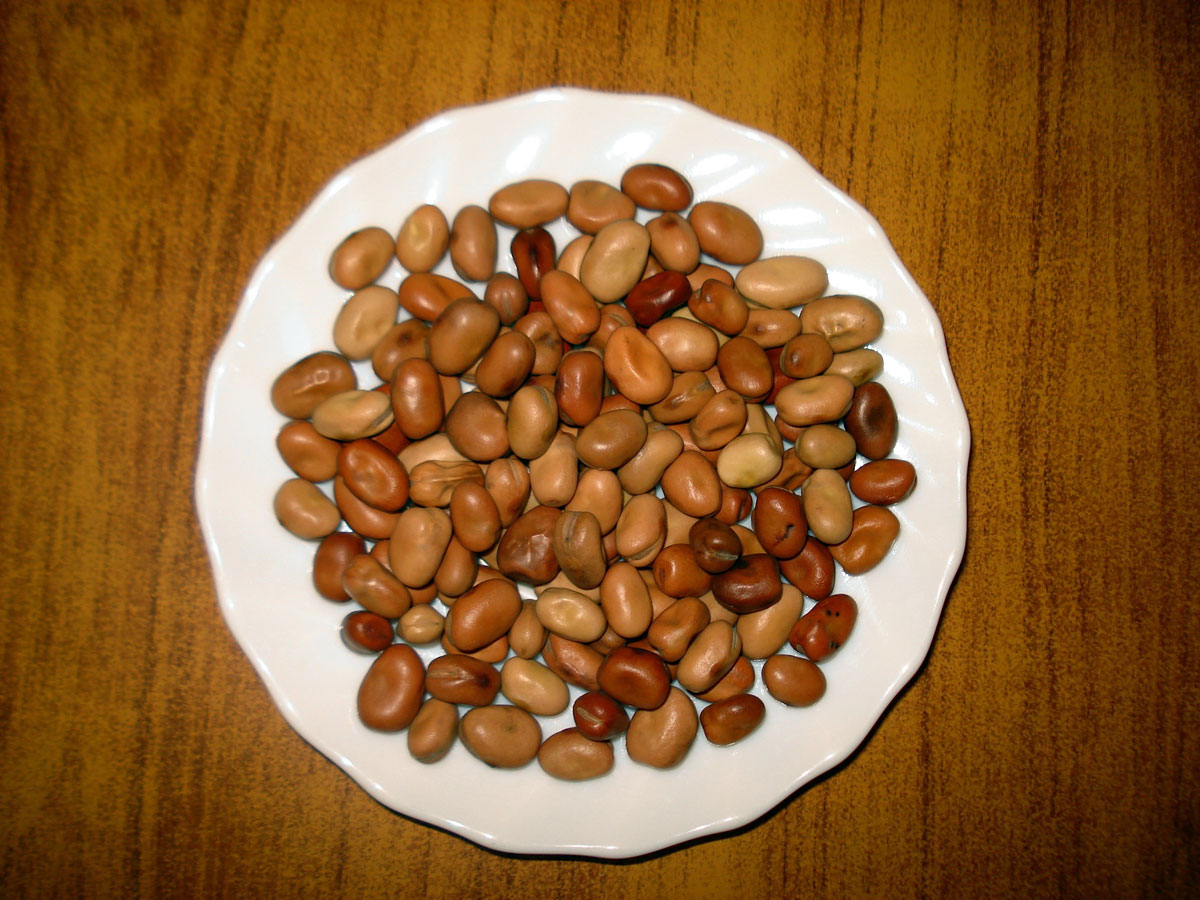