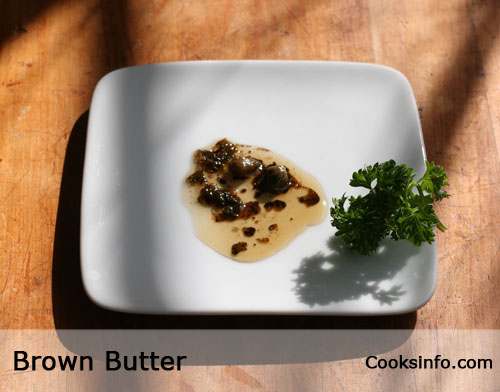 Brown Butter (aka “beurre noir” meaning “blackened butter” in French) is butter that is cooked until it has deeply browned, to which capers and chopped parsley are then added. It’s then poured out into a dish. A tablespoon of vinegar is heated in the pan where the butter was browned, then added to the melted butter in the dish.

When being used with eggs, the parsley and capers are often left out.

There’s a lot of confusion over the term “Brown Butter” in English. It really should have been translated into English as “blackened butter”, to avoid confusion with many other takes on brown butter, but it’s far too late for that. Brown Butter is the term that the English version of Larousse Gastronomique has used for decades for the French “beurre noir”, which is described above.

In French, this is called “Beurre noir.” It’s similar to “noisette butter” (“Beurre Noisette”), except noisette butter isnt’ browned as deeply in colour and has nothing added to it; it’s just plain butter.

Brown Butter is often also confused with Meunière Butter, and with melted butter that has been browned without the acidic addition to the sauce. 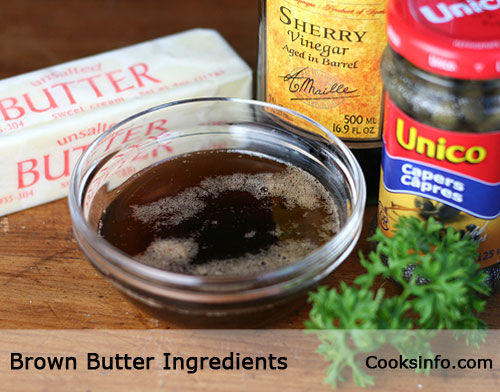 The butter will develop brown bits in it; don’t strain those out. Those are the flavour bits you are working to develop.

In this regard, it’s the opposite of Indian “ghee butter”, where you strain the solids out deliberately so that there are none to brown.

Instead of vinegar, another acid can be used to deglaze the pan such as lemon juice.

You can make this up to several days in advance; store covered in refrigerator. Gently re-heat in microwave to serve.

“Black Butter: Shake a quarter of a pound of butter in a frying-pan till it becomes a deep brown; let it settle; skim and pour it clear off; wipe the pan, and return the butter into it; add two spoonfuls of tarragon vinegar, salt, and mix it.” — Domestic Economy and Cookery, for rich and poor, by a Lady, 1827.

This web site generates income from affiliated links and ads at no cost to you to fund continued research · Information on this site is Copyright © 2022· Feel free to cite correctly, but copying whole pages for your website is content theft and will be DCMA'd.
Tagged With: Butter, French Sauces