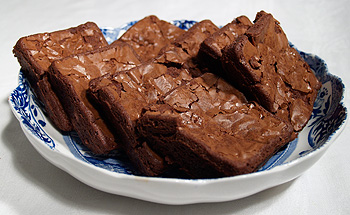 Contents hide
Brownies are slices of sweet, thick, dense cake that is not meant to rise much. They will only be an inch (2 1/2 cm) or so tall.

Depending on how much flour is in the recipe being used, the inside of Brownies can be dense, moist, gooey, almost fudgelike and chewy, or they can be lighter, drier and more cakelike. The top will be somewhat crusty, and provide a contrast to the inside. They should never, though, be rock-hard like biscotti.

They are usually flavoured with chocolate. Occasionally you will see recipes for “brownies” that don’t have chocolate and are instead butterscotch flavoured, but these recipes are variants and are the exception to the rule.

Brownies contain nuts more often than not. Many people are leaving out nuts now for fear of others being allergic to them.

They are baked in shallow pans, square or rectangular (for large batches.) They are sometimes frosted, sometimes sprinkled with icing sugar, sometimes left plain on top.

They are cut into squares or bars for serving.

Brownies are still not that common in the UK. They are often advertised as “American brownies.”

The 1896 edition of the “Boston Cooking-School Cook Book” applied the word “Brownie” to small, individual serving-size molasses cakes. They would have indeed been brown because of the molasses in them, but there was no chocolate present:

Ten years later, though, in the 1906 edition of the “Boston Cooking-School Cook Book”, the recipe called for 2 squares of melted chocolate, making them indeed Brownies as we know them today (2007.) This recipe, by the way, called for nuts. Walnuts, to be precise.

In 1909, the Walter Baker Company (aka Baker’s Chocolate) put out a cookbook called “Chocolate and Cocoa Recipes”, written for them by Maria Parloa. Parloa’s book, though, did not contain a single brownie recipe.

The popularity of Brownies with chocolate in them spread by the 1920s.

Brownies were a great luxury in North America during the Second World War. Fat, eggs, and sugar, not to mention chocolate itself, were all restricted.

After the war, Brownie recipes with increased chocolate, eggs and butter in them emerged.

Mix ingredients in order given. Bake in small, shallow fancy cake tins, garnishing top of each cake with one-half pecan.

Brownies are named for their dark brown colour (originally caused by something such as molasses; now brought on by the presence of chocolate.)

Brownies is also a nickname in North America for young Girl Guides, because of the brown uniforms they have.