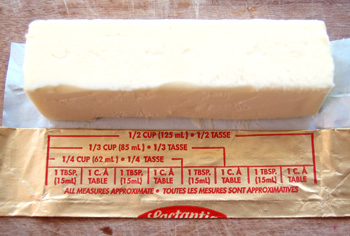 A stick of butter is the result of taking a one-pound (450g) block of butter, and cutting it lengthwise into quarters (actually, it’s made that way). Each stick of butter therefore weighs ¼ pound (4 oz / 115 g.)

Commercially, the sticks are individually wrapped for sale.The wrapping may be foil or waxed paper. Waxed paper is handier for easy disposal in compost. 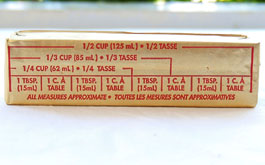 The wrapping usually has lines on it indicating amounts in tablespoons. You just cut the stick at the desired measurement marking. It is best to do this while the butter is cold, but that’s not always possible if you need to set the butter out in advance to have it soft for a recipe that needs it soft.

Sticks of butter are sold everywhere in America. They are also available in Canada, though they are less popular as they cost more there. You cannot generally get butter packaged in this way in other English-speaking countries.

Block margarine is also available in the same format.

The term “Butter Stick” can also be used to refer to butter in a plastic stick, like a glue stick. Ones with concave tops for buttering corn cobs with have been around since the 1950s. You take out an insert, put butter in, put the insert partially back in, then press the insert up to force butter out through small holes in the top, as you rub the top along the surface of a hot cob of corn.

Butter Sticks for general kitchen use came onto the market around 1995. A winder thing at bottom raises the butter up and out, and instead of spreading butter on bread with a knife, you swipe the surface on the bread, wielding it as you would a glue stick.

If a recipe calls for a stick of butter, it is the ¼ pound definition that is meant, not the gadget definition.

Land O’Lakes was the first to start selling butter in sticks, in the early 1920s.