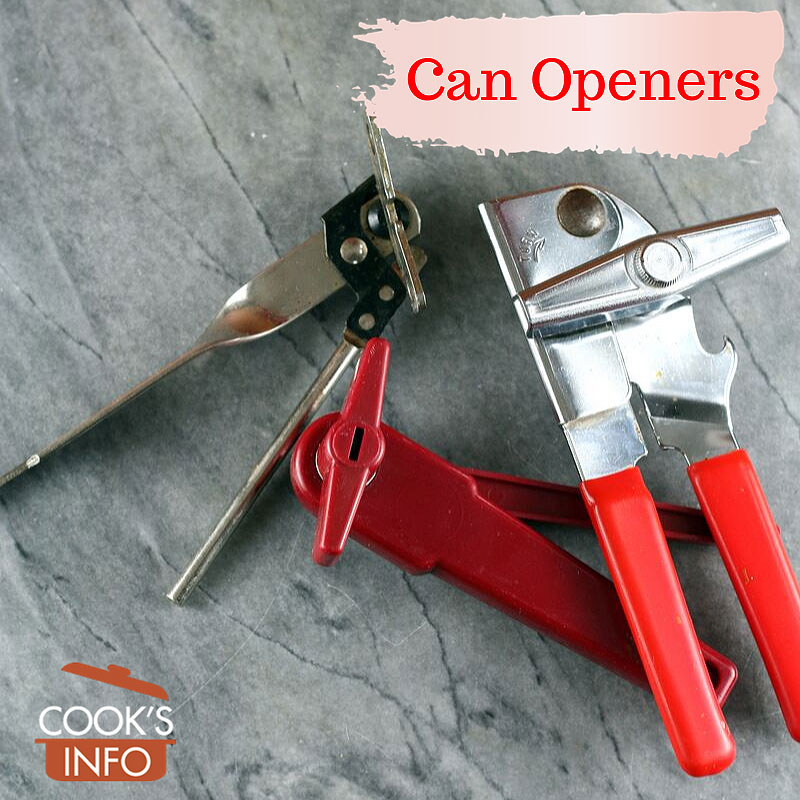 When most people draw up a wish list of kitchen essentials to recommend to someone else, they almost always forget a can-opener. Yet a can-opener is perhaps the one essential item for working in a kitchen.

Good can openers should also have no problem with the oddly shaped tins that anchovies, sardines and smoked oysters come in.

People with pets often like to keep a separate one for opening tins of pet food. Some people swear their pets can hear the difference between the people food can opener and the pet food can opener.

Generally, there are two categories of can-openers:

These can openers cut inside the top of the can, cutting around the rim and leaving the rim intact. Most can openers will still hold the lid until you release the handles, but if you didn’t the lid would be able to fall down into the can a bit (as far as the tin’s contents allow it to, anyway.) Downside: sharp lid. Upside: you can hold the cut-off lid inside the can, and tip the can to drain, with the cut-off lid holding the contents inside the can. This is the most common type in North America

These can openers cut around the side of the can, just below the rim. Downside: lid is safer to handle, but sharp edge is now transferred to the can. It is much harder to use the lid as an improvised draining assistant. Doesn’t work with cans that need the top ridge for a plastic lid, such as coffee cans. This is the most common type in the UK.

Anyone used to using one class of can opener is completely befuddled when handed the other. 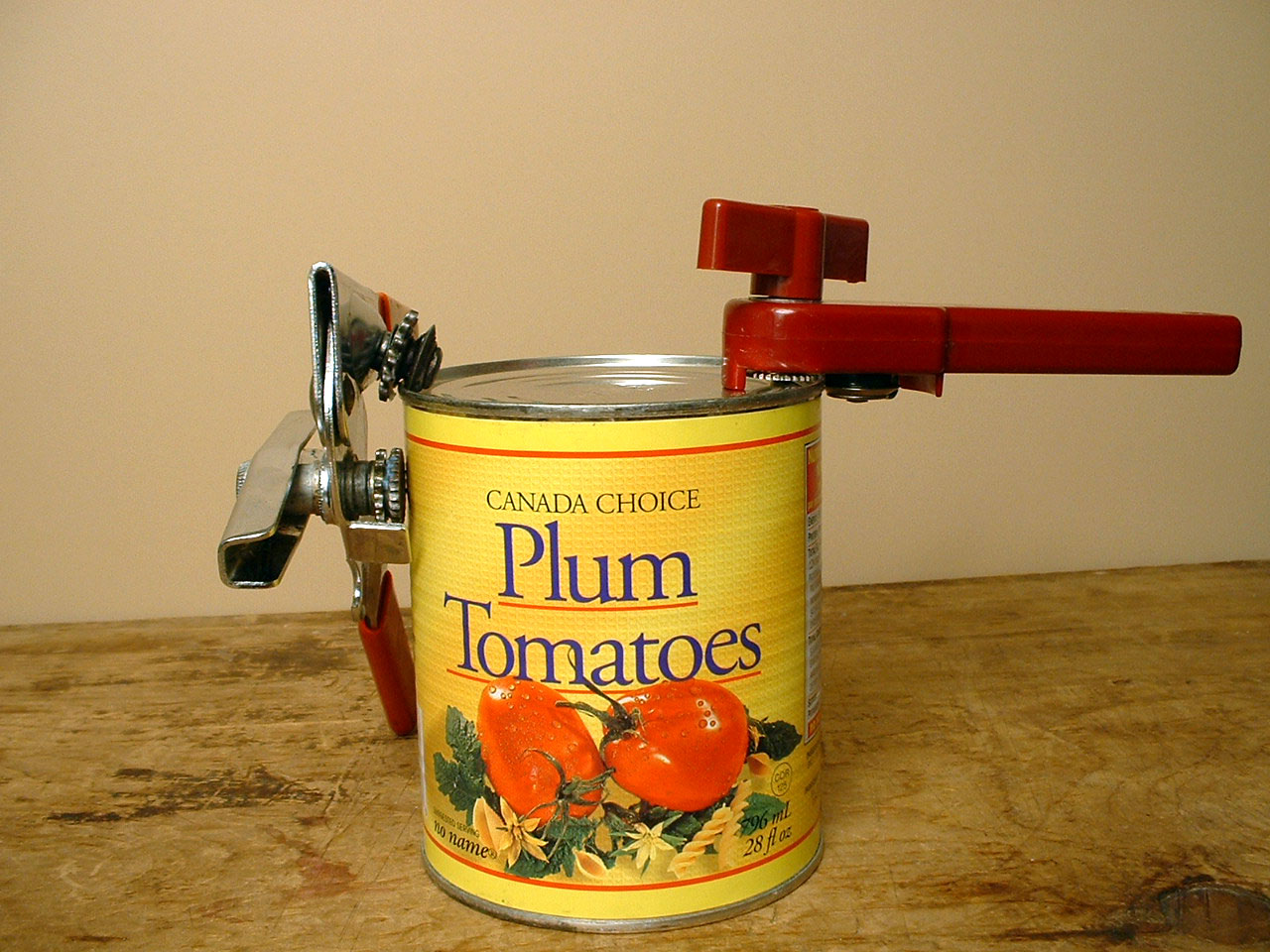 Wheel-type can openers are top-cutting models.

They have a slender lower part which can hurt the hands, and the key with which you turn the wheel is also not very comfortable on your thumb. They are unfriendly enough for anyone, but particularly for people with failing hands. The upper arm is thicker, and has a bottle opener at the end.

They tend to rust in dishwashers.

The main advantage is the price, costing about $1.00 (2006 prices), and in North America, familiarity — just about everybody knows how to use one. 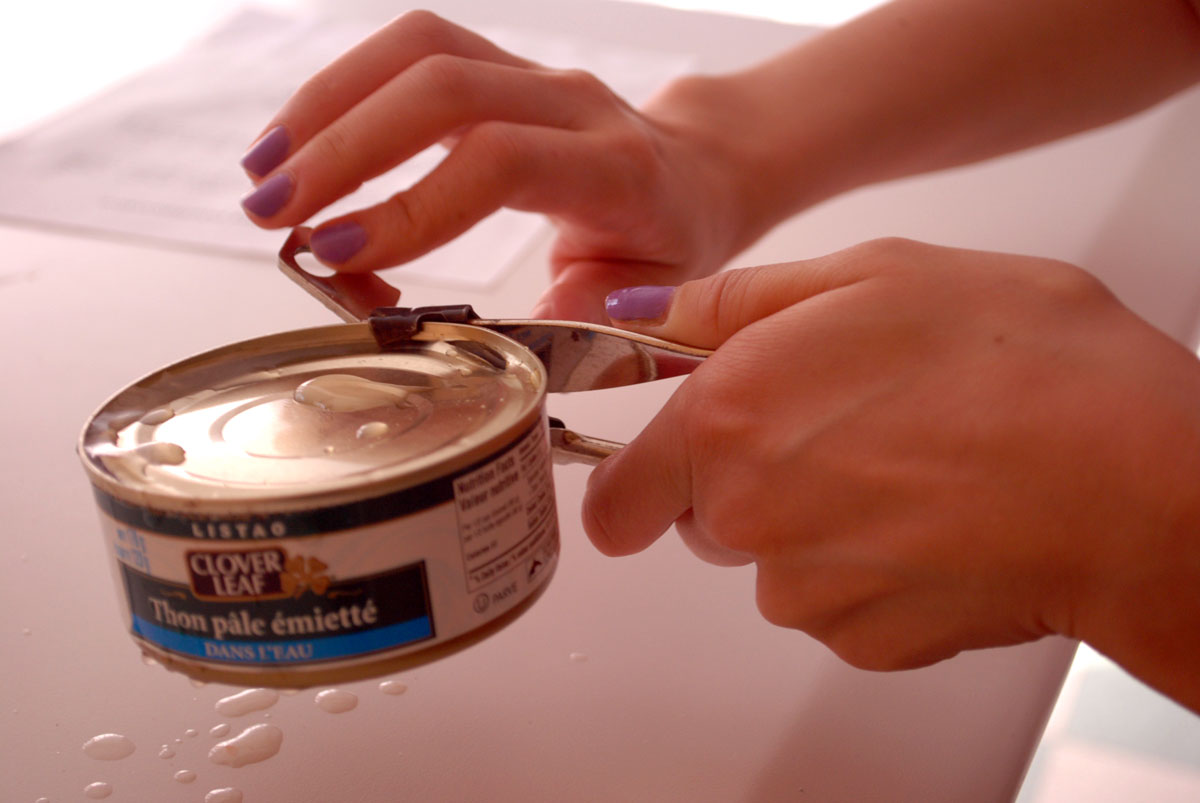 You can get can openers that attach to the wall.

They swing out from the wall for use, and then swing back to the wall when not needed.

Good wall mounted ones have gears on both sides where it meets the rim of the can.

Large cans, however, are more awkward to open with wall-mounted ones. 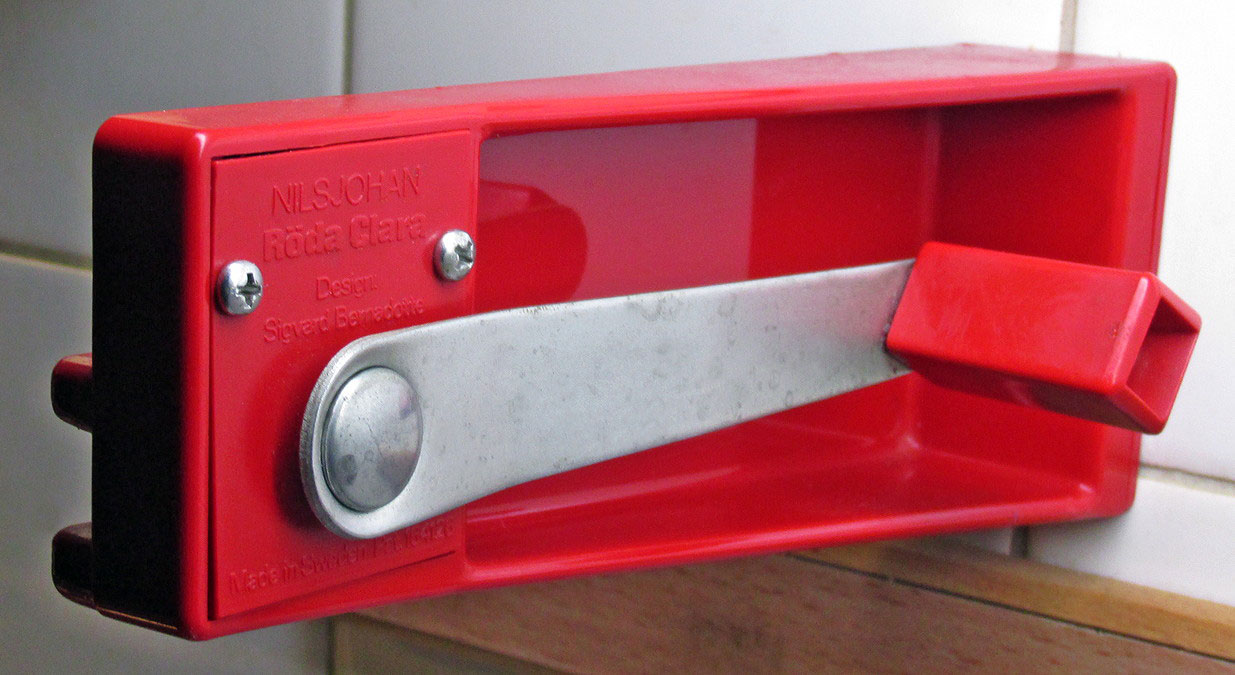 There are two major downsides to electric can openers.

You can also get battery powered can openers. 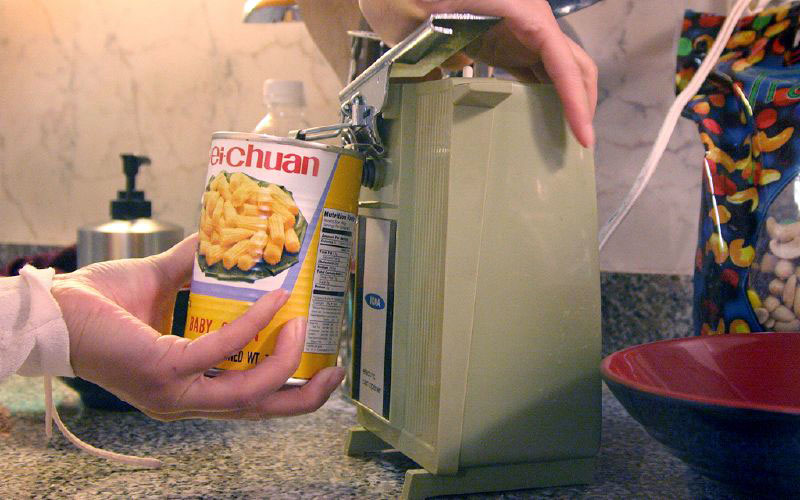 They were issued by the US government for the military, and designed to fit on a key ring.

They were developed in 1942 by the Subsistence Research Laboratory in Chicago. The American government reputedly stopped issuing them sometime in the 1980s.

They consist of a flat piece of metal about 4 cm (1 ½ inches) long with a sharp blade hinged on it.

Using one, it takes 38 to 40 punctures to open a can. They don’t rust or need sharpening. 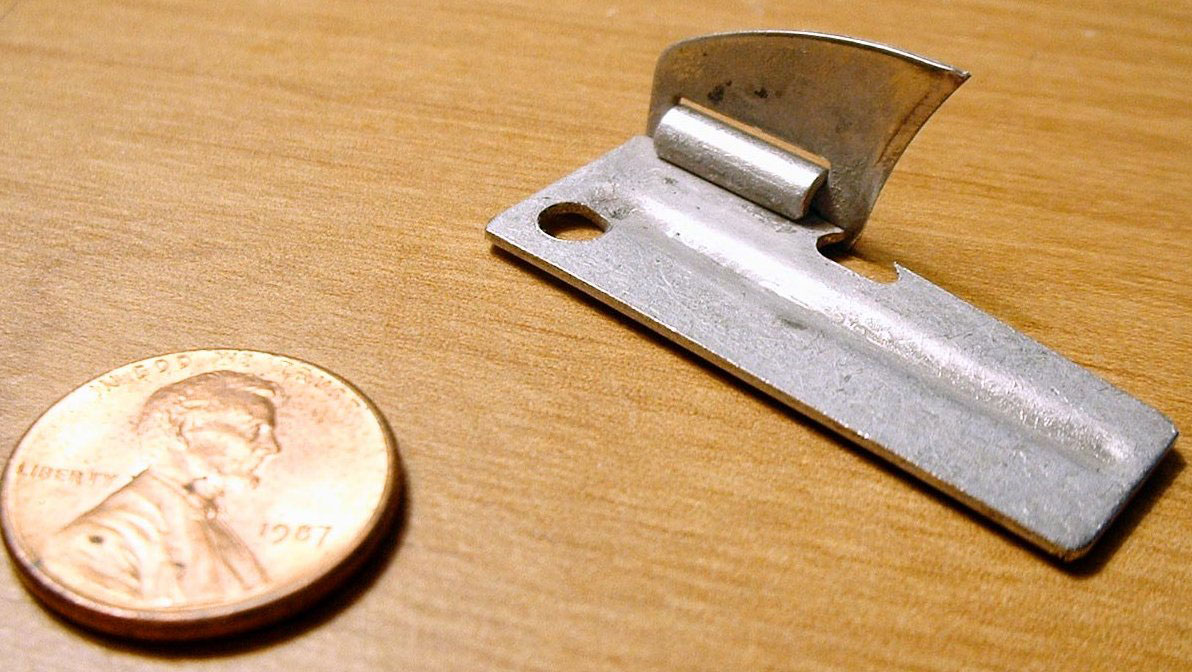 Cans that are dented around the rim can always be a challenge. Though good quality can openers should be able to handle them, if all else fails, you can turn the can upside down and open from the bottom. After all, there was no preset top or bottom until the label was stuck on.

Can openers need to be cleaned periodically, even though most people just throw them back in the drawer. Juices will dry in the gears to a crusty sludge.

You can oil your can opener once in a while with lightweight machine oil or sewing machine oil. After you oil it, dab the gears with the piece of paper towel to get excess oil off.

As soon as tin cans were invented (1810), a way had to be found of getting into them. Hammering them worked, but with very unsatisfactory results for the food inside.

The first tin cans were iron coated in tin. Only when cans got made of thinner metal over time did can openers become possible. The first can opener was patented in America in 1858 by Ezra J. Warner of Waterbury, Connecticut.

On 2 October 1866, an American, J. Osterhoudt of New York City was granted a patent for a tin can that could be opened with a key.

In 1870, a man named William Lyman patented an easier to use can opener with a wheel that rolled around the rim of the tin. You first had to pierce the tin to get it started, though, and it would only work with 1 size of tin.

In 1925, Lyman’s design was improved by the The Star Can Company of San Francisco by making the edge of the wheel serrated.

In December 1931, the first electric can opener went on sale.

Some of the earlier models of can openers were “cutter style”. You starting using them by using them to poke a hole in the lid of the can. Then you would move the can opener to cut a bit of tin, and repeat this sawing motion all around the lid until it came free.

This type of can opener is still popular in Japan. 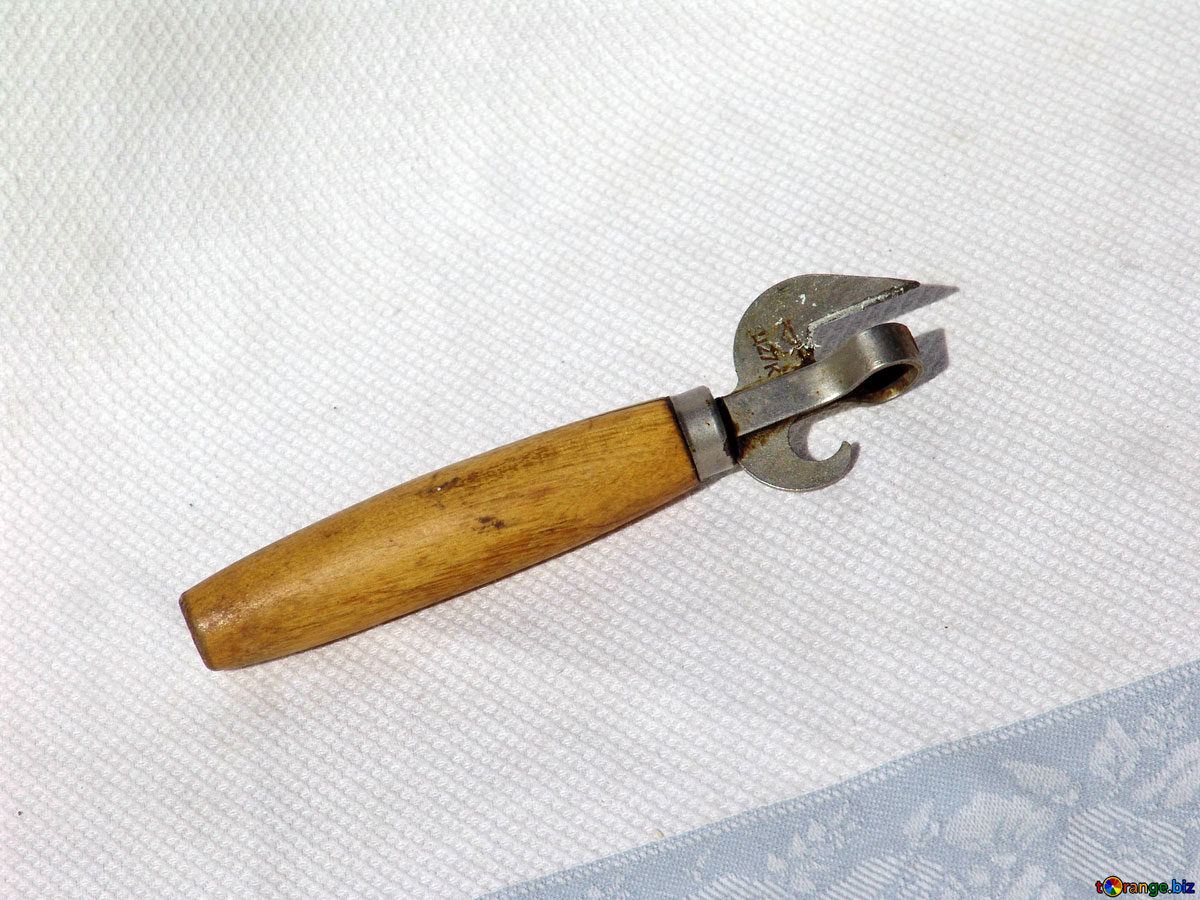 The most ubiquitous make of can opener in North America is perhaps the hand-held model made by the Swing-A-Way company, which despite its name, sells more hand-helds than wall-mounted units.

The company was founded in 1938 by Idus L. Rhodes, and remained in family hands until 2005.

Up until World War Two, the company made only wall-mounted ones, but then after the war found that in increasingly-elaborate fitted kitchens, coming with built-in cabinets all over the place, consumers were facing challenges as to where to mount the wall ones. In 1955, they started selling hand-held ones, using the double-gear mechanism that they had been using with their wall ones.

On 18 March 2005 the company was sold to Focus Investments Inc. 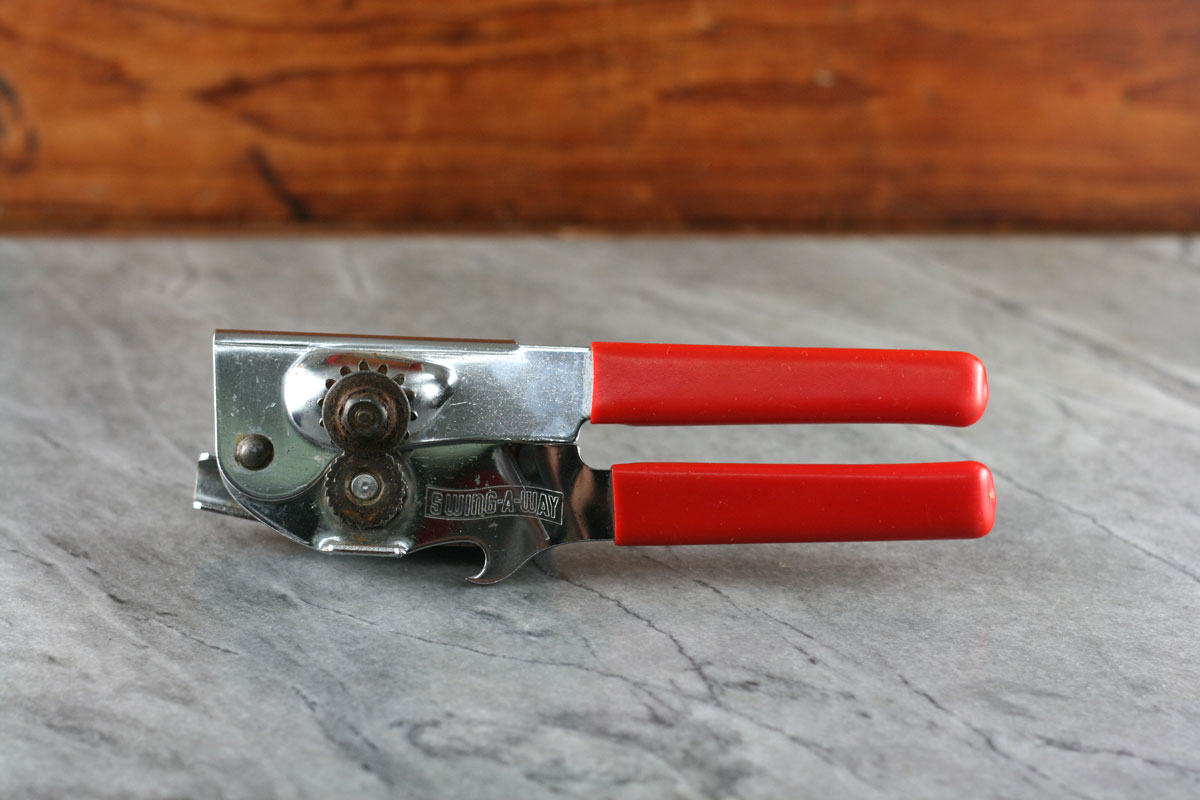 This web site generates income from affiliated links and ads at no cost to you to fund continued research · Information on this site is Copyright © 2022· Feel free to cite correctly, but copying whole pages for your website is content theft and will be DCMA'd.
Tagged With: Cans