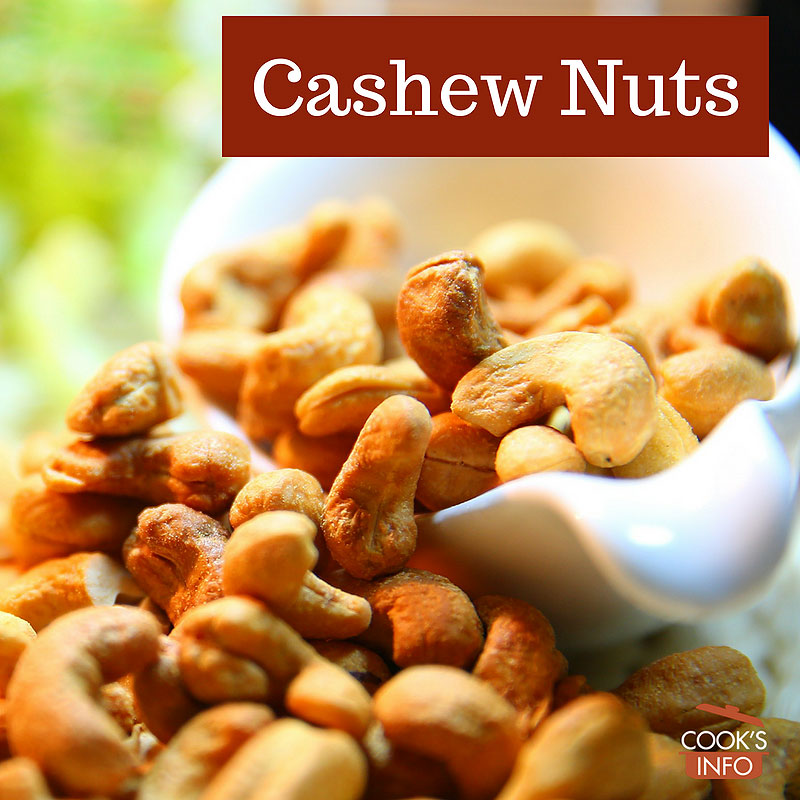 A cashew nut is a kidney-shaped nut which is always sold unshelled.

The tree does not tolerate any frost. In the United States, that means growth is limited to the extreme south Florida, Hawaii, and Puerto Rico.  [1]McLaughlin, John et al. Cashew Apple Fruit Growing in the Florida Home Landscape. University of Florida IFAS Extension. Publication #HS1127. Page 1.

A cashew tree will start producing nuts in its second year, though it won’t reach its full potential until it is around 10 years old. By the time a tree is 20 years old, its productive life is over. Depending on what stage of life a tree is at, and how vigorous it is, a cashew tree can produce anywhere up to 50 kg (around 100 pounds) of nuts a year.

The tree blooms, and produces flowers which are pollinated by insects.

A nascent nut in a large green shell then forms on the stem where the flower was. 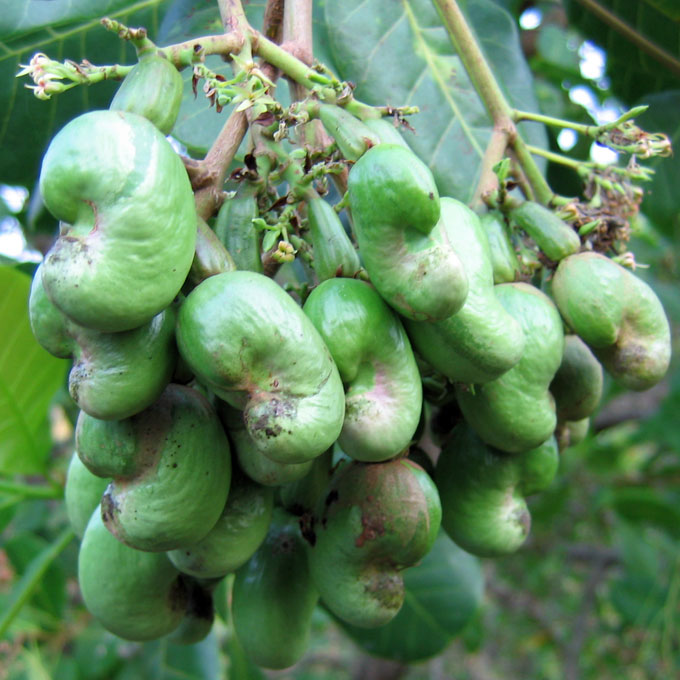 At first, the nut is far bigger than the fruit above it, but the fruit grows to many times the size of the nut, pushing the nut away from the stem, with the nut remaining in its place on the bottom of the fruit. 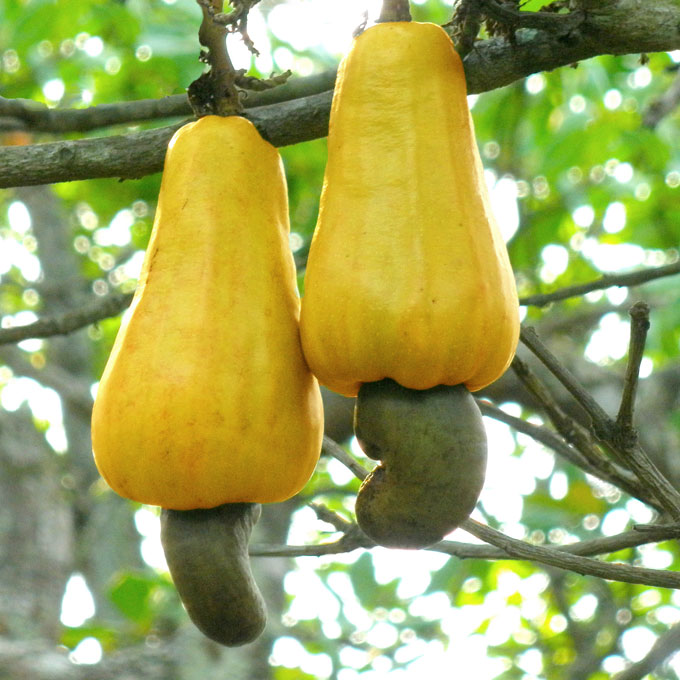 The fruit, and its nut, take two to three months to fully mature

The fruit is called a “cashew apple.” It’s not actually a true fruit. It’s really just a swollen stem (“peduncle”.) The fruit may be red, yellow or yellowish-green, and can be round, pear-shaped or elongated.

The fruit is juicy, sweet smelling and sweet tasting. It can, however, have an astringency in the background of the taste: how astringent seems to depend on the exact variety of the cashew tree.

The fruit can be harvested and used for many fruit products such as juice and jams, though it must be used quickly — it begins to ferment after 24 hours, which is why you won’t see many being shipped for sale abroad. Its tender skin also makes it difficult to ship. 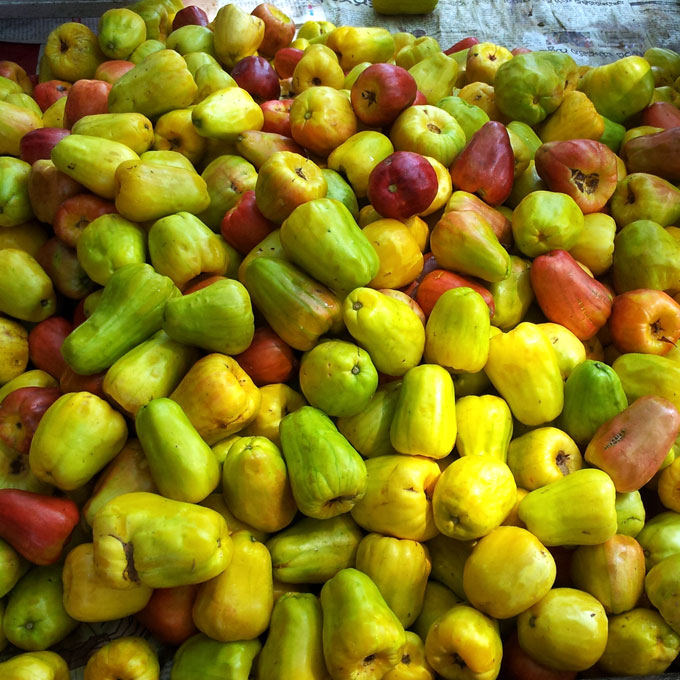 The nut is more valuable than the fruit, however, so often the fruit is just discarded in pursuit of the nut. Sometimes, the fruit is allowed to just fall off the tree, and it and its nut are harvested from there.

The nut has a double shell. The nut is first pink, then green as it ripens, changing to greyish green then greyish brown as it reaches full maturity.

The nut’s outer shell contains “urushiol”, the same allergen that is in poison oak, poison ivy, and poison sumac. Not surprisingly, therefore, this toxic outer shell can cause dermatitis in some people.

Cashew nuts are always processed, consequently, to remove this outer shell. The processing must be done in a certain way, because if the shell is not opened properly, the toxin will get on the nut making it unfit for selling, let alone eating.

Most companies heat process the nut to make the shell easy to remove by steaming and/or boiling the nut in oil. The actual process of removing the shell after that is manual. A worker can process about 80 kg (175 pounds) of cashew nuts a day, using a specially designed machine with blades and cutters.

“Mechanical means for shelling have been unsuccessful, so hand labor is required. Cashews are usually roasted in the shell (to make it brittle and oil less blistering), cracked, and nuts removed and vacuum packed. In India part of nuts are harvested from wild trees by people who augment their meager income from other crops grown on poor land. Kernels extracted by people skilled in breaking open the shells with wooden hammers without breaking the kernels. Nuts are separated from the fleshy pedicel and receptacle, seed coat removed by hand, and nuts dried. Fresh green nuts from Africa and the islands off southern India are shipped to processing plants in Western India.” [2]James A. Duke. Anacardium occidentale L. Handbook of Energy Crops. unpublished. 1983. Accessed July 2018 at https://hort.purdue.edu/newcrop/duke_energy/Anacardium_occidentale.html

Cashew nuts are sorted, graded and sold based on size and colour of the nuts, as well as how intact they survived the harvesting process.

“Types include “white,” “scorched,” and “dessert.” “White” kernels are white or pale and are the highest in quality. “Scorched” kernels are over-roasted with light brown color.

“Dessert” kernels, the lowest in quality, are allowed to have brown and black spots and may be scorched and shrivelled. Each type is then divided into whole or broken grades (i.e., “splits” are broken lengthwise, “butts” are broken cross wise, and “pieces” are broken into more than two parts) and are further subdivided according to size.

The shells, though, are not waste material. “From the shells or hulls is extracted a black, acrid, powerful vesicant oil, used as a preservative and water-proofing agent in insulating varnishes, in manufacture of typewriter rolls, in oil- and acid-proof cements and tiles, in brake-linings, as an excellent lubricant in magneto armatures in airplanes, and for termite proofing timbers. ” [4]James A. Duke. Anacardium occidentale L.

In fact, just about every part of the tree appears to have a use. The wood, which is soft to somewhat
hard, is considered good for furniture and the bark is useful in tanning leather. Even the stems by which the fruit are attached to the trees are used. They produce ‘cashewa gum’, which is used as a substitute for gum arabic as well as in pharmaceutical production. [5]James A. Duke. Anacardium occidentale L. In Indonesia, the leaves are used as a folk medicine treatment for skin diseases and burns. Industrial uses have even been found for the caustic oil, called “cashew nut shell liquid (CNSL)”, such as in paints, varnishes and automobile breaks.  [6]Yokoyama, Kevin M. et al. Cashew. University of Hawaii, Department of Agricultural and Resource Economics. Economic Fact Sheet #6. December 1989. Pages 1 and 2.

Cashew nuts are inedible when raw.

The University of Florida Extension Service gives the following advice for using the cashew apples:

The cashew apple may be consumed directly or either used for juice or preserved in syrup (candied). The fresh cashew apples from non-improved plant material may be astringent due to their high tannin content, and are much more palatable if first processed to remove the bitter taste. This can be accomplished either by steaming under pressure (i.e., a pressure cooker) for 10–15 minutes or boiling in salty water for 15 minutes. The apples are then pressed to remove excess moisture and boiled in cane sugar syrup for 2 hours. Finally they are sun dried, or placed in an electric food drier. Cashew apples are also canned in syrup and used to prepare chutneys and fruit pastes. Because of their high pectin content, they set readily and make good jam.

The juice can also be extracted and strained, after which gelatin is added at a rate of ¼ oz per 3 cups of strained juice with constant stirring for 15 minutes. The tannins in the juice bind to the gelatin and form a precipitate, which can then be removed by filtering through muslin cloth. Sugar can then be added to taste. The juice readily ferments, and is used in various countries to prepare wines and distilled liquors (e.g., Brazil, Guatemala, Western Africa, India, Sri Lanka, and the Philippines). Take care when handling the juice since it can permanently stain clothing. Cashew apples are a good source of Vitamin C.” [7]McLaughlin, John et al. Cashew Apple Fruit Growing in the Florida Home Landscape. Page 7.

A University of Hawaii paper gives this advice on food use of the cashew apple:

“The cashew apple can be eaten raw, but generally not more than two or three are consumed at time, since it has an astringent taste and can irritate the mouth. Steaming the apples removes the astringent taste, and variety of products such as jam, jelly, syrup, juice, and alcoholic and nonalcoholic beverages can be produced. In Brazil and Argentina, wine and soft drinks are popular. Liquor called Feni is produced in India. Cashew apple juice contains two to three times more vitamin than citrus juices and may also be blended with other juices such as pineapple, lime, and mango.” [8]Yokoyama, Kevin M. et al. Cashew. Page 1.

Provides B vitamins, fibre, fatty acids, carbohydrate potassium, iron, and zinc. Cashews are lower in fat than other nuts such as peanuts, pecans, almonds and walnuts, but the fat is saturated.

The fruit is very high in Vitamin C.

The Institute of Food and Agricultural Sciences (IFAS) at the University of Florida gives this caution about handling raw cashew fruits and nuts:

“Great care must be exercised in handling raw nuts, since the shell contains a poisonous, thick, caustic oil, which can cause severe dermatitis in susceptible individuals. Gloves should be worn when removing the cashew nut from the cashew apple. Note that cashew is in the same family as Brazilian pepper and poison ivy, both well known as capable of inducing severe allergic reactions….. Homeowners should not attempt shelling and consuming the cashew nut produced by cashew trees grown in the home landscape. The shell contains a reddish-brown, viscous, oily liquid composed of various phenolic lipids. This oil is poisonous and acts as a powerful vesicant, causing extensive blistering of the skin (dermatitis). Removal of the kernel from raw nuts requires special precautions and procedures. The sap from the wood, leaves, and flowers may also cause dermatitis, and the smoke from burning any part of the tree is poisonous.” [9]McLaughlin, John et al. Cashew Apple Fruit Growing in the Florida Home Landscape. Page 2.

Cashew trees are a New World food, native to Brazil and Peru. In the 1500s, the Portuguese introduced cashew cultivation to their other colonies such as Goa in India, from which it is now a major export crop.

Primary commercial interest in the nut is a modern occurrence; previously, it was the apple that was of main interest.  [10]McLaughlin, John et al. Cashew Apple Fruit Growing in the Florida Home Landscape. Page 2.