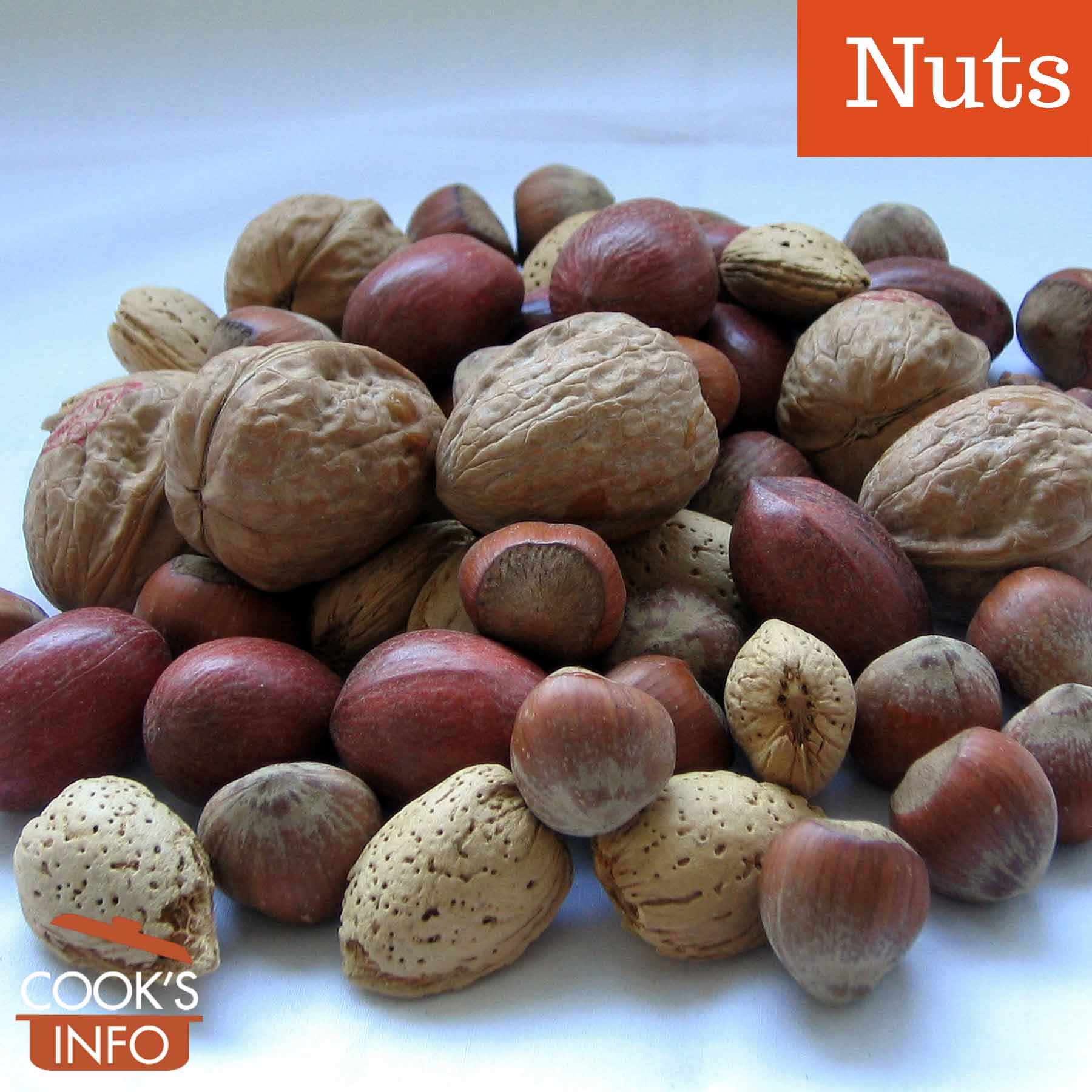 A nut is a single-seed covered by a dry shell. The edible part is inside the shell.

Nuts can be eaten out of hand as a snack food, used as an ingredient chopped or whole, pressed to yield oil, or ground into pastes. Food-wise, they provide both nutrition and taste, along with bulking and binding qualities.

Nuts can be regarded as a subsistence food for foragers, but in practice for the rest of us, they can be some of the pricier items on our shopping lists at grocery stores.

We call many food items “nuts”, and use them for all intents and purposes as nuts. Many “nuts”, though aren’t technically nuts at all.

True nuts are nuts such as acorns, beechnuts, chestnuts and hazelnuts.

Almonds, Brazil nuts, butternuts, hickory nuts and walnuts all grow inside a fruit, like the stone inside a cherry or a peach. They’re actually a seed covered by a wet fruit covering, and that’s why they’re not true nuts (they’re actually what botanists call “drupes”.)

Other things that we regard as nuts, such as cashews, coconuts, peanuts and pine nuts, aren’t actually nuts, either.

Even though tree nuts grow inside fruit, they are not classified as fruit.

Generally nuts can be eaten raw, but are often toasted to enhance their flavour. Sometimes toasting nuts is referred to as “roasting” them.

To toast nuts, place them in a frying pan such as a cast-iron or a non-stick one, with nothing else in the pan (meaning no oil or butter), and heat them for a few minutes over a low heat, stirring them occasionally. Or, bake on an ungreased cookie sheet at 175 C (350 F) for 10 minutes (shake a few times during that).

When chopping nuts in blender or a food processor, if sugar is appropriate for what you are making, you can add a teaspoon or tablespoon of sugar to help prevent them sticking together. Flour will also do the trick.

To crush nuts manually, put them between two pieces of waxed paper or in a plastic bag and roll with a rolling pin.

When cracking nuts in their shells, be careful of flying pieces, especially with regard to your eyes.

Nuts are high in fat, but the fat is considered by nutritionists to be a good fat: apart from coconuts, the fat in nuts is largely unsaturated.

“Nuts are nutrient-dense foods, containing healthy monounsaturated (MUFA) and polyunsaturated (PUFA) fatty acids and proteins. At the same time, they are a good source of soluble and insoluble fibers, vitamins E and K, folate, thiamine, minerals, such as magnesium, copper, potassium and selenium, and substances, such as carotenoids, antioxidants, and phytosterols compounds, with potential benefits for human health. Due to the high energy density of nuts and seeds, it was believed that their consumption could increase weight gain; however, if consumed in the recommended portions, it has been observed that their consumption does not favor weight gain. In contrast, the consumption of nuts can help control satiety and also increase the quality of a diet.” — Oddenino, Martina. University of Turin. Understanding Mediterranean and Okinawa Diets. Step 3.5: Fruit and vegetables. Accessed February 2022 at https://www.futurelearn.com/courses/okinawa-diet/3/steps/1373393

Nuts in their shell have a longer storage life. Shelled nuts should be stored in the fridge or freezer, as they can go rancid faster.

Nuts have been a part of December celebrations for millennia. The Romans would give each other small presents including nuts at Saturnalia, and gamble for them; the nut tradition got absorbed with Saturnalia into Christmas and is still a tradition in many European and Middle Eastern Christian cultures. Christians in Syria eat nuts as part of their Christmas dinner; in Europe, for hundreds of years children have received nuts in their Christmas stockings.

“I have a venturous fairy that shall seek the squirrel’s hoard, and fetch thee new nuts.” — Titania. A Midsummer Night’s Dream. Act IV, Scene 1. Shakespeare.

Shelled nuts are sometimes referred to as “Nut meats”.

Acorn Starch Jelly is a Korean jelly made from acorn starch. Its texture is like a firm blanc-mange or piece of firm tofu. It is brown, the colour of milk chocolate It is rather bland, but its texture is its purpose. To make it, starch is mixed...

Acorns are nuts from oak trees. There are really, from a food aspect, two types of acorns: Spanish and North African acorns, and all the rest. The acorns most worth bothering with are considered to be those of the oak tree known variously as holly,...

Almonds are members of the peach family. The tree blossoms in the spring before it grows leaves.There are two kinds of Almonds, sweet and bitter. An Almond, technically, isn't a nut -- it's the pit of a fruit related to peaches, plums and apricots....

Amalou is a chocolate-coloured, honey-based nut paste made in Morocco. The taste is not dissimilar to commercial peanut butter (which is sweetened, as opposed to "natural" peanut butter.) It is either made from honey and squished argan kernels (leftover...

Brazil Nuts © Denzil Green Brazil Nut trees are grown in Peru and Bolivia as well as in Brazil. The trees grow up to 165 feet tall (50 metres.) Attempts at growing the trees in plantations have so far failed to produce Nuts. Only a certain ... 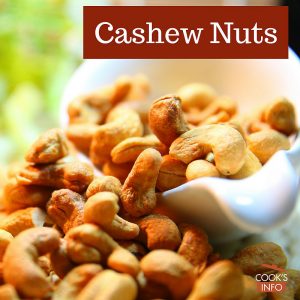 A cashew nut is a kidney-shaped nut which is always sold unshelled. The cashew tree Cashew trees thrive in tropical heat. They are tropical evergreens that can grow quickly up to 15 metres (50 feet) tall. They have large leaves -- 10 to 20 cm (4... 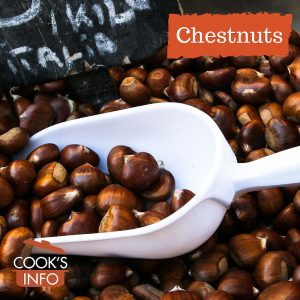 Chestnut is a name used to refer to a category of high-starch nuts from Europe, North America and Asia. They are eaten cooked or prepared in some way, but not raw. Several products as well as traditional recipes are made from them.

Coconuts © Denzil GreenCoconut trees have a productive life of about seventy years, and can each produce up to seventy coconuts a year. Each Coconut takes about a year to ripen. They actually grow inside smooth shells. This smooth shell is removed ...

Fistik Ezmesi is Turkish marzipan. It's green because it's made from pistachios, not almonds, as other marzipan is. In fact, it doesn't even use any almond flavouring at all, though it does use a great deal of sugar. It's used in cookies, cakes,...

Green Walnuts is a term that means unripe walnuts. They are sometimes also called "Wet Walnuts." They look vaguely like limes. They are regular walnuts, but just picked before the nut shell starts to form and harden -- when they are about 1 inch... 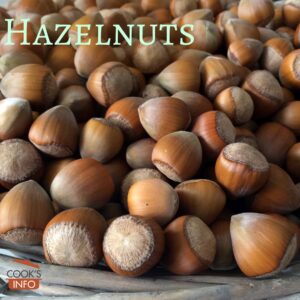 Macadamia nuts grow on evergreen trees with dark, glossy green leaves. The trees can reach 30 to 40 feet tall (9 to 12 metres), and be nearly as wide. They can be grown from seed, but because they will take 8 to 12 years to bear nuts this way, they are...

Roasted Peanuts © Denzil Green As everyone knows, Peanuts are actually not nuts, they are legumes — more closely related to a tin of mooshy peas than they are to the almond paste on your Christmas cake. But they sure do look like nuts, and you use th...

Pecans © Denzil Green What's better? Georgia Pecans? Texas Pecans? Louisiana? North Carolina? Most people love them all. You can buy them shelled or unshelled; you can even buy New Mexico Pecans dusted in red chile powder (presumably not meant ...

Pine Nuts © Denzil Green Pine Nuts grow on several different varieties of pine trees largely in Italy and Spain. A tree takes 75 years before it is ready to be commercially harvested for its nuts. Gathering is very time consuming as first ...

Pistachios © Denzil Green Pistachio nuts grow on a tree called the "pistacia." Pistacia trees need to be at least 7 years old to really start producing, but once they get going, trees have been known to last for at least two centuries. There ...

Tigernuts are actually tubers, as peanuts are. Underground, the Tigernut plant grows rhizomes, off of which grow small roots and off of which, in turn, the "nuts" are formed. They are planted in the spring and ready to harvest 4 to 5 months later. The...