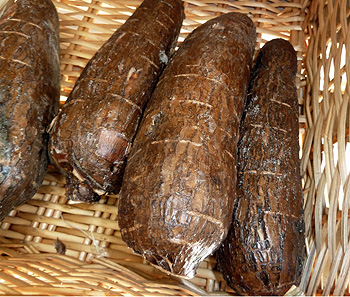 The Cassava plant is a shrub that grows from about 3 to 10 feet above ground (1 to 3 metres), with huge tuberous roots about 3 feet long (1 metre) weighing up to 20 pounds (9 kg.) The roots have a rough, brown, tough exterior bark-like skin, with another skin under that. Inside, the root is stringy and white.

There are two kinds of Cassava roots, bitter and sweet.

The bitter must be cooked, as it contains poisonous prussic acid that is destroyed by cooking. After it is cooked, it is often dried, at which point it can be ground into a flour called “Gari” to make unleavened items such as flat breads, etc, or used as a thickener. It is also often processed to make tapioca.

The sweet variety is very slightly sweet tasting, and is safe to eat raw. It can be boiled as you would a potato, or baked or fried.

A Cassava root needs anywhere from 8 to 12 months of growth to be ready to harvest. Once harvested, it does not store well — it can rot within 48 hours — so the roots are generally left in the ground until needed. 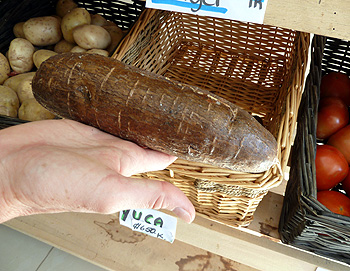 The leaves can also be eaten if boiled first to remove the toxins.

When shipped whole, Cassava is often waxed to stop it from drying out. When buying, choose ones with no sour smell: they should smell “clean.”

Don’t buy any that seem slimy or have cracks.

Don’t use any that are dark inside near the skin when you cut them open.

Cut into 3 or 4 inch (7.5 to 10 cm) pieces. Make 1 cut along the sides, and look for a skin under the rougher, external skin. Work a knife under that lower skin and peel that off.

After cooking, you will be able to remove a stringy central cord which is brownish is colour.

The root is an important starch source for poor people around the world. It produces 40% more starch than rice, but is very low in any protein — a diet highly reliant on cassava will lead to malnutrition.

The bitter variety is unsafe to eat raw. It contains the cyanogenic glucoside linamarin (which protects the plant from insects). In the gut this can form toxic Hydrogen Cyanide, so before consumption, it needs to be processed. [1]Parsons, Andy. Introduction. In: Exploring Everyday Chemistry. University of York. Online course. Step 1.3. Accessed November 2021 https://www.futurelearn.com/courses/everyday-chemistry/6/steps/1118280 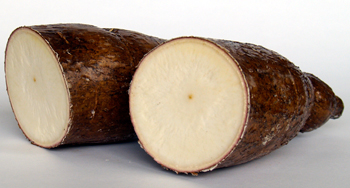 Don’t refrigerate Cassava. Store in the coolest place you have for a few days.

Cassava has been cultivated since about 1000 – 800 BC in Brazil and Paraguay. The sweet Cassava grown today doesn’t exist in the wild, it’s the product of several millennia of selective breeding.

Columbus’s diaries mention his eating Cassava bread in the New World. Cassava was brought to Africa in the 1500s.

Cassava’s synonym, Yuca, is pronounced “you – kah.” Cassava, however, is not the same plant as the spiky plant called “Yucca” sometimes grown as a houseplant.

This web site generates income from affiliated links and ads at no cost to you to fund continued research · Information on this site is Copyright © 2022· Feel free to cite correctly, but copying whole pages for your website is content theft and will be DCMA'd.
Tagged With: Cassava, Latin American, Latin American Food