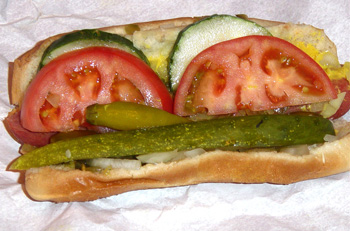 Chicago Hot Dogs is a term used to describe how Hot Dogs are generally prepared and sold in the Chicago, Illinois area.

A Chicago Hot Dog consists of an all beef wiener on a hot dog roll sprinkled with poppy seed, with 7 defined toppings.

They are essentially a Jewish creation, with the toppings influenced by other cultures. The preferred wieners and buns were created by and are still supplied by Jewish family-run businesses, and the overall style is credited to hot dogs served at the turn of the 20th century in Chicago’s Jewish market on Maxwell Street.

The wieners used are not skinless; instead, they have a casing on, which gives a snap when you bite in to them that fans feel is vital. (Note that the foot-long versions of the all-beef wieners may use a pork casing. [1] ) The wiener has a mild taste, so that it doesn’t fight with all the toppings.

The wiener most commonly used is made by the Vienna® Beef company. One of the founders of Vienna Beef was a Samuel Ladany, who had sold hot dogs from a push cart at the Columbian Exposition in 1893. Since 1983, a competitor is Red Hot Chicago wieners (founded by a grandson of Ladany.) Best’s kosher wieners were popular as well, but Sara Lee bought out the product, and killed it off in January 2009. Disconsolate Best’s fans refuse to accept Hebrew National as an acceptable substitute.

The wieners can be cooked by steaming, simmering in water or grilling. Simmering is called the “dirty water” method. If the wiener is grilled, it is referred to as a “char dog.”

The roll is steamed to heat it. The roll is usually “Mary Ann Poppy Seed Hot Dog Buns” made by S. Rosen bakeries, founded 1909.

Seven toppings are standard. While this is more than has been common elsewhere in America, so much so that the toppings earned the hot dog the description of being “dragged through the garden”, the newly emerging Sonoran Hot Dogs (see separate entry) do have more toppings.

Following is a list of the toppings, presented in the order which fans say they should go on the wiener already in the roll:

Purists will admit no fewer, no more, and no other toppings. In practice, lettuce and fresh cucumber slices are accepted options.

“… the toppings came from competition among Greek and Italian vendors, who needed to add value to their product during the Depression….Sausage is German in origin and so is mustard, but buns are American—Germans would eat it with bread, but not a bun,” Kraig explains. “Sport peppers are basically giardiniera, as is relish, which is Italian, while dill pickles are German. Tomatoes and onions are Mediterranean, so that’s Greek and Italian, and these came from guys that turned their produce carts into hot-dog carts on Maxwell. Chicago was a major producer of celery until the ’20s, and celery salt became a substitute. The poppy-seed bun, which is Jewish and was introduced locally by Rosen’s bakery, didn’t appear until after World War II.” [2]

The relish used became the nuclear green relish only in the 1970s, when it became commercially available. See history section.

The yellow hot dog rolls with poppy seeds are the default hot dog roll for street vendor hot dogs in Toronto as well. Steaming the rolls is common in Montreal (see entry on Montreal Steamies.) 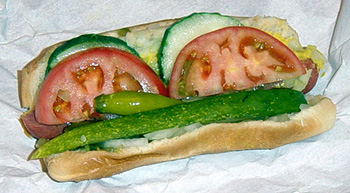 One of the first people to sell a heavily-dressed hot dog in Chicago was Abe “Fluky” Drexler, in the Jewish market on Maxwell Street (born 1910; died in 1986 at the age of 76.)

In 1929, at the age of 19, he had a vegetable stand in the market, but decided to convert it to selling hot dogs instead. He charged a nickel for them (including fries), and called his stand “Fluky’s.” Fluky was his nickname. In a school-initiation, his school mates tied a rope around his neck and dragged him up the stairs. The story goes that they later said it was just a “fluke” that he didn’t die.

He called it a “Depression Sandwich.” He dressed it with mustard, relish, onion, pickles, pepper, and lettuce. In an interview (with Charles Leroux, appearing in the Chicago Tribune on 29 July 1976), he said “We sold hot dogs for a nickel apiece, seven items for a nickel: the hot dog, onions, pickle, piccalilli, French fries, lettuce, hot peppers.” That quote implies — well more than implies, that the lettuce disappeared, and that tomatoes weren’t original. (Note that piccalilli is the Chicago term for green relish; it doesn’t mean what piccalilli means in the rest of the world.)

There was a period of 9 years with no store, then Fluky’s opened another location in 1964 at the corner of Pratt and Western Avenue. Then in 1968, it moved to 6821 North Western Avenue. In 2006, the name of that location was changed to “U Lucky Dawg.”

“My friends used to call me ‘you lucky dog’ as a kid because I was always so lucky,” says owner Larry Estes, who’s managed the restaurant since 1997. “The other Fluky’s locations did not serve Vienna Beef hot dogs, so we decided to disassociate ourselves from the Fluky’s name. I know some people weren’t happy with it, but it was time for a change.” [3]

“U Lucky Dawg” went out of business in November of 2008. Some say it may have been owing to a legal dispute between Estes and Abe’s son, Jack Drexler, who owned two other Fluky’s, at North Michigan  Avenue and at inside the Walmart at the Lincolnwood Town Center. [4] As of autumn 2010, there are proposed plans to change the “U Lucky Dawg” site into a mosque. [5]

Currently (2010) just the Lincolnwood Town Center Fluky’s remains, but Fluky’s has started selling its own brand of condiments and wieners through stores and by mail order.

In addition to the possible change that omitted the lettuce and introduced the tomato, in the 1970s the now familiar bright green relish was introduced: “The only change since 1929 has been the relish, which turned its distinctive “nuclear green” color in the 1970s. Fluky says they developed it, but he’s not too clear about why.” [6] It would appear that Fluky wasn’t too clear about who invented the nuclear-green Sweet Pickle relish, either: CooksInfo.com isn’t sure, either, to be fair, but it has been sold in southwestern-Ontario by the Bick’s company since at least 1960, and the distance between southwestern-Ontario and Illinois is not that great in North American terms.