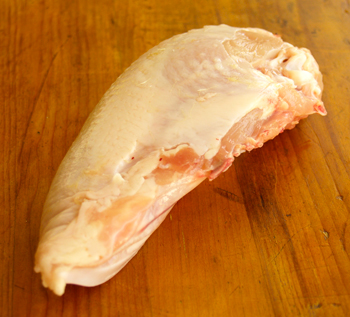 A chicken breast is actually the underside of a chicken when it is up and wandering about. Each chicken has two breasts. When a recipe calls for a chicken breast, it generally means half the breast, and not the whole breast (a whole breast being the two halves of a breast.)

Occasionally, breast or thigh cuts may include the some part of the chicken back.

Chicken breasts are the most expensive chicken part to buy, as most people consider the white meat in the breast more desirable than they do the dark meat from the other parts of the bird. Chicken Breasts are sold skin on or skin off, boneless or bone-in. The most expensive Chicken breasts are those that are both skinless and boneless, as you have to pay for the extra work to be done and because everything you are getting is edible. The unfortunate thing about this is that despite costing more, boneless and skinless breasts often cook up dry and chewy. For most cooking purposes, it’s better to buy with the skin on to stop the meat from drying out during cooking; you can discard the skin afterward if you want.

Some cooks feel that boneless, skinless chicken breasts have the texture, taste and appeal of tofu. Much of the flavour that would have come out into the meat during cooking is in the bones and skin. If you think about it, even those chefs for whom cost is no object use bones, and not boneless breasts, to make their stocks from, simply because the flavour in the bones.

Skinless, boneless breasts are, though, good for inexperienced or squeemish cooks. You won’t see many people who know how to cook and manage their kitchen budget buying them except for very special need recipes — they want the whole chicken, as they will have so many other things they want to do with the rest of the bird.

Many people, though, are just plain squeamish about the skin. Some people even pull the skin off their Kentucky Fried Chicken breasts and discard it, which seems to defeat the whole purpose of buying KFC.

If overcooked, any chicken breast will go tough and dry.