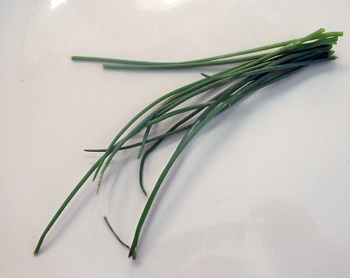 Chives are the smallest member of the Onion family. They grow in clumps and have long hollow green shoots for leaves.

The plant grows 6 to 10 inches high (15 to 25 cm.) If the plant flowers, it will produce blue flowers, but never any seed: it self-propagates by producing bulbs.

In a temperature climate where the winter isn’t severe, the Chive plant can be treated as a hardy perennial that will grow back in the spring. It can be clipped 3 or 4 times a year.

Chives have a very mild, subtle onion flavour. The onion flavour and taste comes from the oil in its stalk, which is rich in sulphur, like onions.

Chives are best used fresh, because the flavour of Chives is destroyed by drying. Freeze-dried ones are now available, which are fine for use in cooking and in bread recipes.

Chives are grown all over Europe and North America; they grow wild in Italy, Greece, Oxfordshire and Wales. 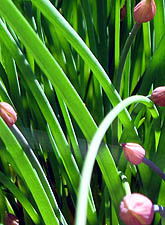 Add Chives to cooked dishes just before serving, as cooking will destroy their flavour and colour. Do not put Chives in a uncooked dish that you plan on keeping for several hours or longer, because they develop an unpleasantly strong taste.

Chives are easier to cut with kitchen scissors rather than a knife.

The first records of Chives being harvested date back to the 16th century in Northern Europe.

The Chives that the French settlers on the island of Cape Breton at Fort Louisbourg brought with them in the early 1700s escaped cultivation and have since grown wild on that island.

Onion in Latin was “cepa”. That become “cive” in Old French, and later evolved into the word for Chives in English.