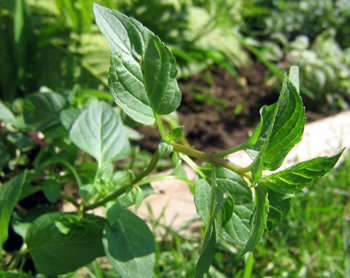 The kindest you can say, in deference to those who swear they detect chocolate in the flavour of Chocolate Mint, is that it might slightly be a subvariety of Black Peppermint.

But basically, it’s a myth that there is any such thing as “Chocolate Mint.” It really doesn’t exist as a separate mint cultivar.

The “chocolate” aroma or taste that some people think they detect is more the power of suggestion, and perhaps a bit of the power of assocation, because chocolate and mint have been used together in many candies.

Chocolate Mint contains none of the compounds that would create even the faintest chocolate aroma, and and when sniffed side by side with black peppermint, no difference can be distinguished.

“Doesn’t this have a wonderful chocolate aroma?” asked an herb grower. “No,” we replied, “it’s ‘Mitcham’ peppermint and we don’t smell any chocolate.” This is another example of good old-fashioned hype and the power of suggestion.”