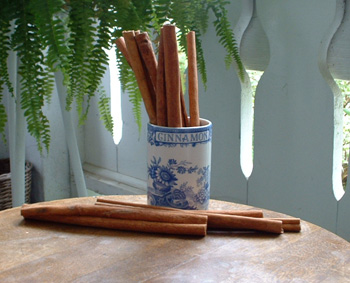 Cinnamon Sticks are the dried bark of the cinnamon tree. The inner bark is then peeled off and dried — this is cinnamon. It rolls itself naturally as it dries.

You don’t actually eat Cinnamon Sticks; you just let the flavour infuse into a drink or dish, then discard. In addition to adding flavour, they also add flair. They also add some interest to tedious Christmas receptions, as guests remove them from their mugs of heated apple cider so that the sticks don’t poke them in the eye, and then realize they have to look for some place to covertly stash them in your livingroom.

A stick of cinnamon is called in the trade a “quill” or a “pipe”.