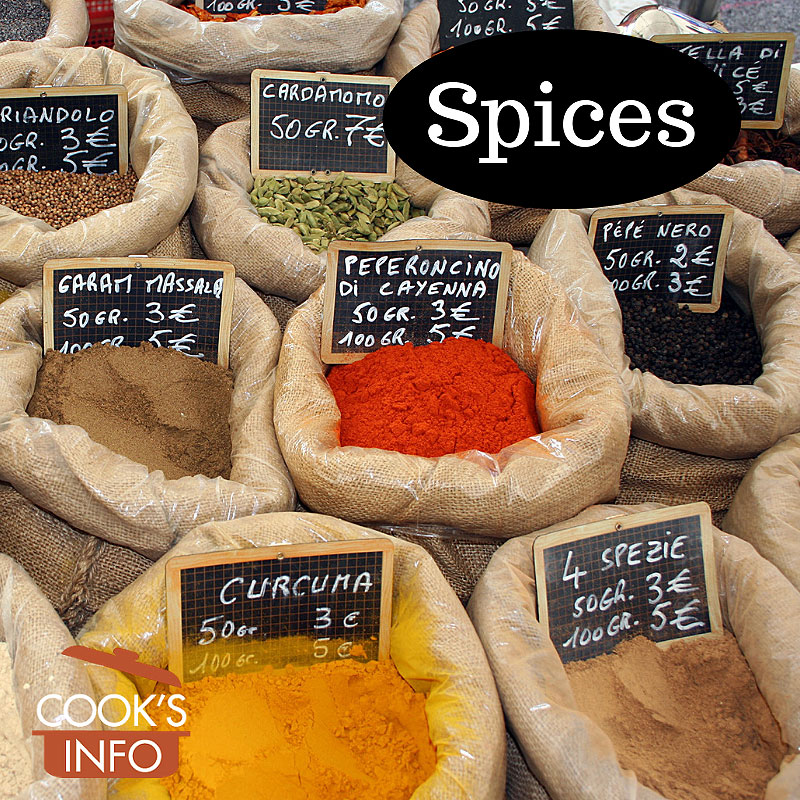 The pursuit of spice had a profound impact on human history. Such a great impact, in fact, that there are entire books, academic treatises and websites dedicated just to spices, negating the need for to recount here the (genuinely interesting) history of spice caravans in the eighth century.

What counts as a spice

It can be hard to define what qualifies as a spice. Some people call a sesame seed a spice; others include herbs, and flavourings such as vanilla. The items that most people think of as spices, though, generally tend to grow in tropical areas and won’t grow in temperate zones (e.g. the Northern Hemisphere), while herbs will grow in temperate zones. (Caraway, celery, fennel and mustard seeds would be good exceptions, being spices that can grow in Europe.)

Spices can be almost any part of a plant used for flavouring or aromatic purposes: the bark, the seed, the fruit, the bud, the root, the flower, even a secretion from the plant. Leaves, however, are classified as herbs.

One thing’s for sure: as far as spices are concerned, we are living in a totally unique time in human history. In 5,000 years of spices, only in the last 100 years or so — for the sake of argument, say since the early 1900s — has the great unwashed been able to afford them. The pepper, cinnamon and nutmeg that we take for granted were only for our betters — the Rockefellers and Medicis throughout the ages.

To jazz up our bland food, ordinary people would only have had access to what could be grown or gathered for free locally. “Parsley, sage, rosemary and thyme” is beloved to many because of the 20th century singers Simon & Garfunkel, but the song is far older, dating to the late Middle Ages, and those herbs would have been beloved in daily life because they could be grown at the back doorstep.

The question of whether to buy ground versus whole spice may depend on how quickly your cooking habits tend to use up a particular spice.

Some recipes may call for cumin seed, others for ground cumin. This leaves you having to buy two separate items, and having the staleness clock start ticking on both of them. Consequently, some people feel that if they just buy the seed, and grind it when the powder is needed, then there’s only one item they have to stock, which they’re bound to use up faster, and therefore they’ll be more likely to have fresher spice.

If, however, what you tend to cook frequently calls on, say, ground cumin, then it may be worth while for you to stock it already ground, as you will use it up before it goes stale.

The myth of medieval spices being used to mask rotten food

A common myth repeated too easily is that medieval meat was always served highly spiced, and that it was served like this to cover up the fact that it was usually rotten. This doesn’t stand up to a bit of thought, let alone a bit of research. All across Europe, every city and market town required butchers to sell meat within 1 day of slaughtering in the summer, and 3 days in the winter — with the stocks and pillories, and then suspension of trading rights, waiting for any butcher who broke the law. No butcher wanted to lose his trading rights: it was the most lucrative of the trades to be in, as meat was very expensive. This meant that only the very rich could afford it, and when they did get it, it was good quality. But let’s say that some illegal, spoiled meat did get flogged off cheap to the poor in dark side streets: even so, it wouldn’t have been they who were masking the taste with saffron, ginger and pepper: not when ounce for ounce, such spices were worth their weight in gold.

The wealthy did spice up their meat, but it wasn’t to disguise the quality. Medieval thinking believed that all foods were combinations of moisture, dryness, cold and warmth. Eating food balanced in these elements would keep the body healthy. As an example, beer was believed to contain cold and dry elements. Boiling meat would moisten it to balance the dryness, and serving it with very piquant sauces would warm up its coldness. Spices were more than flavouring: they were tied in with the medieval understanding of eating healthily.

Food historians are now pointing out, however, that even food at the wealthiest tables might not have been as heavily spiced as we had earlier supposed. Medieval cooks only wrote down ingredients, not quantities. Think how daunting the simplest curry recipe might seem without knowing that the spices called for are only by teaspoon and half-teaspoonfuls.

The rejection of spice in Classical French cooking

Haute Cuisine in Europe has largely come to be defined by French cooking, and since the seventeenth century French cooking has turned its back on a heavy use of spices and instead embraced as an underlying “universal maxim” that gourmets prefer the natural taste of foods. This, however, doesn’t stand up to examination:

“…gourmet instincts do not necessarily reject spicy complexity, as the rich traditions of the ancient Mediterranean world and the modern cuisines of Mexico, India and the Middle East demonstrate. There is nothing natural about the preference for “le goût naturel.” Indeed, the love of transparency, of tasting the variety of nature at every meal that has come to characterize French cooking in the seventeenth century is less universal than the taste for spicy complexity that preceded it and continues to dominate the culinary aesthetics of most of the planet.” [1]Pinkard, Susan. A Revolution in Taste. New York: Cambridge University Press. 2009. Page 61. 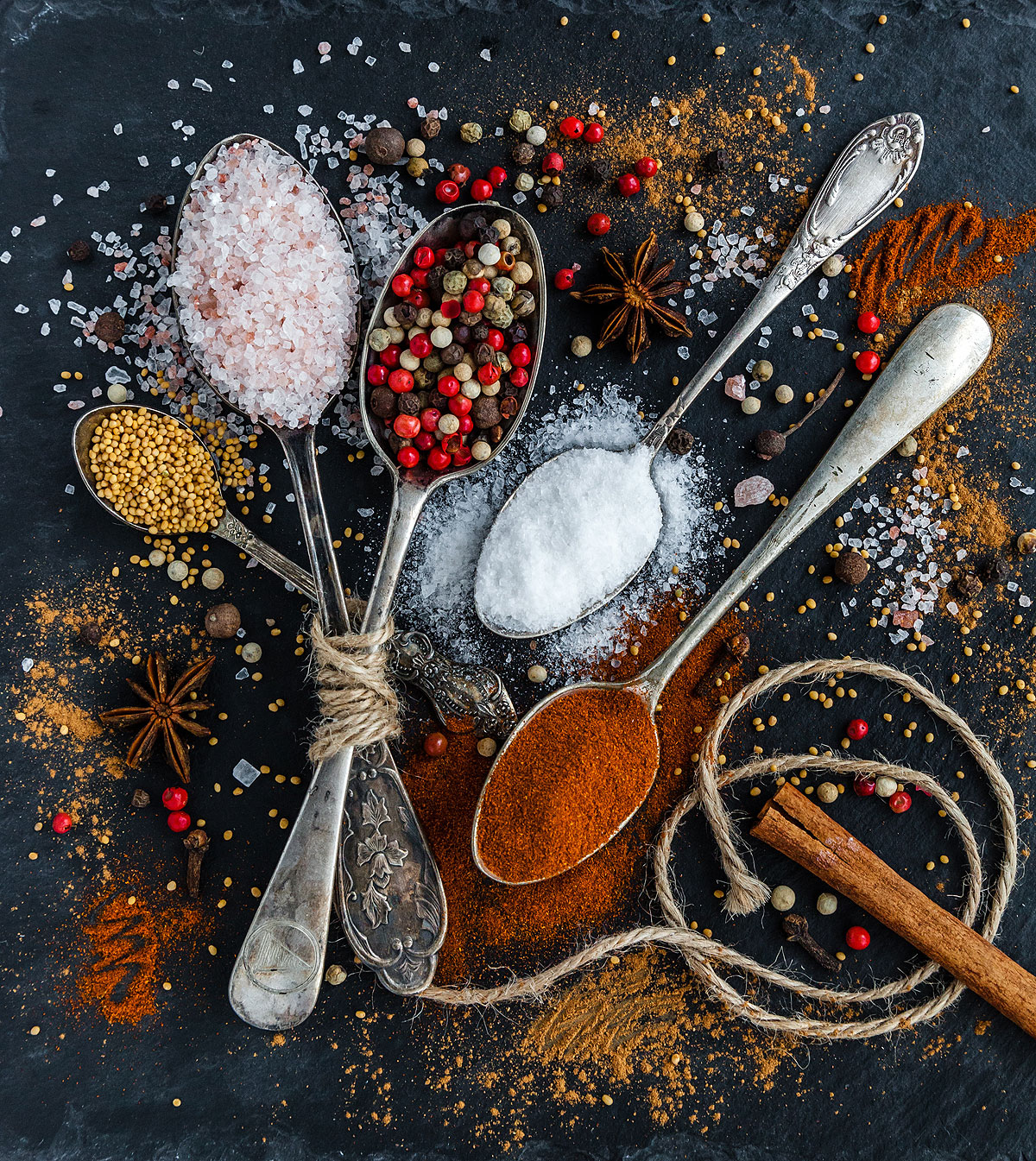 The Arabs were the first to trade spices, and controlled the spice trade for centuries, taking advantage (no fools, they) of their position between the Far East and Europe. By 200 BC, the Romans got into the business, sending trade ships from Egypt around Africa to India for spices such as cloves, pepper, ginger, nutmeg and cinnamon. This brought down the price of spices so that Rome’s wealthier middle-class could enjoy them. After the fall of the Roman Empire and its trading infrastructure in the 400s, the old Arab Spice route overland from India became once again the only path for Spices into Europe, and the prices skyrocketed back up.

The trek was long and slow, through heat and humidity, and the packaging for the spices wouldn’t have been hermetically sealed jars or foil envelopes. It’s hard to imagine that the spices would have arrived in Europe as fresh as we are used to getting them today. If it’s conceivable that spices in the Middle Ages would have arrived in consumers’ hands far less potent, this could be considered as a partial explanation for the use of spice in quantities that seem larger than we would use today of our fresher spices.

In the 1300s, Europeans began sailing to the East again to trade for Spices. The Portuguese, Spanish, Dutch and English fought for control during the 1400s, 1500s and 1600s.

The Dutch would win this battle, and under their effective spice monopoly, the price of spices actually declined. This had a perhaps an unintended effect: along with the decline in the price of spices, their prestige declined as well:

“…imports of spices to Europe, especially to areas north of the Mediterranean, rose sharply in the first half of the seventeenth century. Between 1605 and 1641, the Dutch East India Company established a virtual monopoly on the spice trade…. Under Dutch management, the volume of spices imported into Europe increased dramatically: for example, about 20,000 quintals of pepper reached Europe in 1600 or about 20 grams for each of 100 million inhabitants; eighty years later, this amount had doubled to an estimated 50,000 quintals. At the same time, prices began to fall, in effect creating a new and much larger market among the middling classes and in the countries of Eastern Europe and the Baltic, where spices had historically been in short supply. Spices, which still counted as luxuries in the 1590s, became items of ordinary consumption. Once ‘they were no longer a symbol of wealth and luxury, they were used less and their prestige declined’ [Fernand] Baudel wrote.” [2]Pinkard, Susan. A Revolution in Taste. Page 72.

Plus, the old spices had to compete with new and therefore more exciting luxuries: coffee, tea, tobacco, chocolate, which became the new prestige items to consume. And sweetness was becoming a compelling flavour aspect, owing to plantations in the Caribbean making sugar more available.

Another great decline in the price of spices occurred during the first half of the 1800s as the famous Yankee trading ships brought Americans into the business. By the end of the 1800s, the American genius for mass-volume, lower-priced goods had cinnamon and nutmeg appearing in every apple pie recipe.

Columbus would have made our lives a good deal easier had he thought to bring with him a botanist or even an amateur plant enthusiast. Someone, anyone, with even a rudimentary knowledge of plants or the spices he was commissioned to find. But oh, no; that would have made too much sense. Instead, to this day we live with the results of their confusion and misnaming of the spices (and fruit and vegetables) they did find in the New World.

The patron saint of Spice traders was St Anthony. 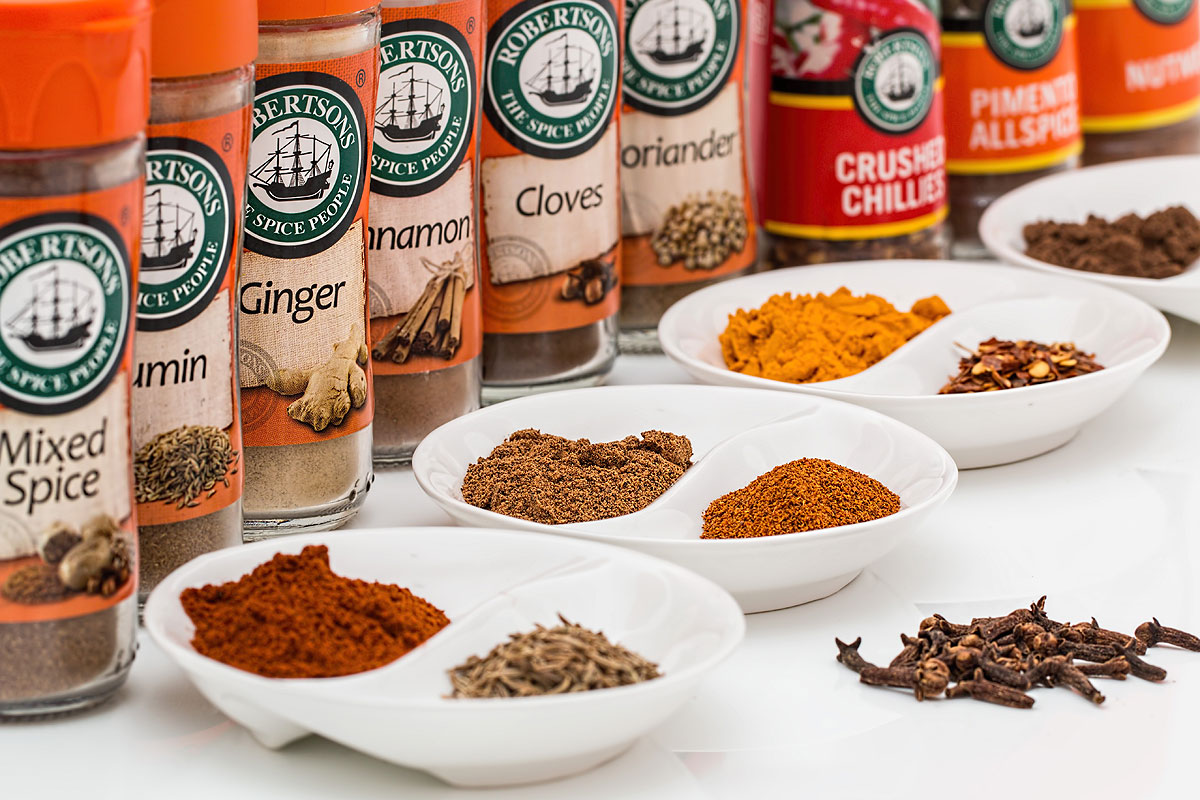 This web site generates income from affiliated links and ads at no cost to you to fund continued research · Information on this site is Copyright © 2023· Feel free to cite correctly, but copying whole pages for your website is content theft and will be DCMA'd.
Tagged With: Medieval Food, Roman Food