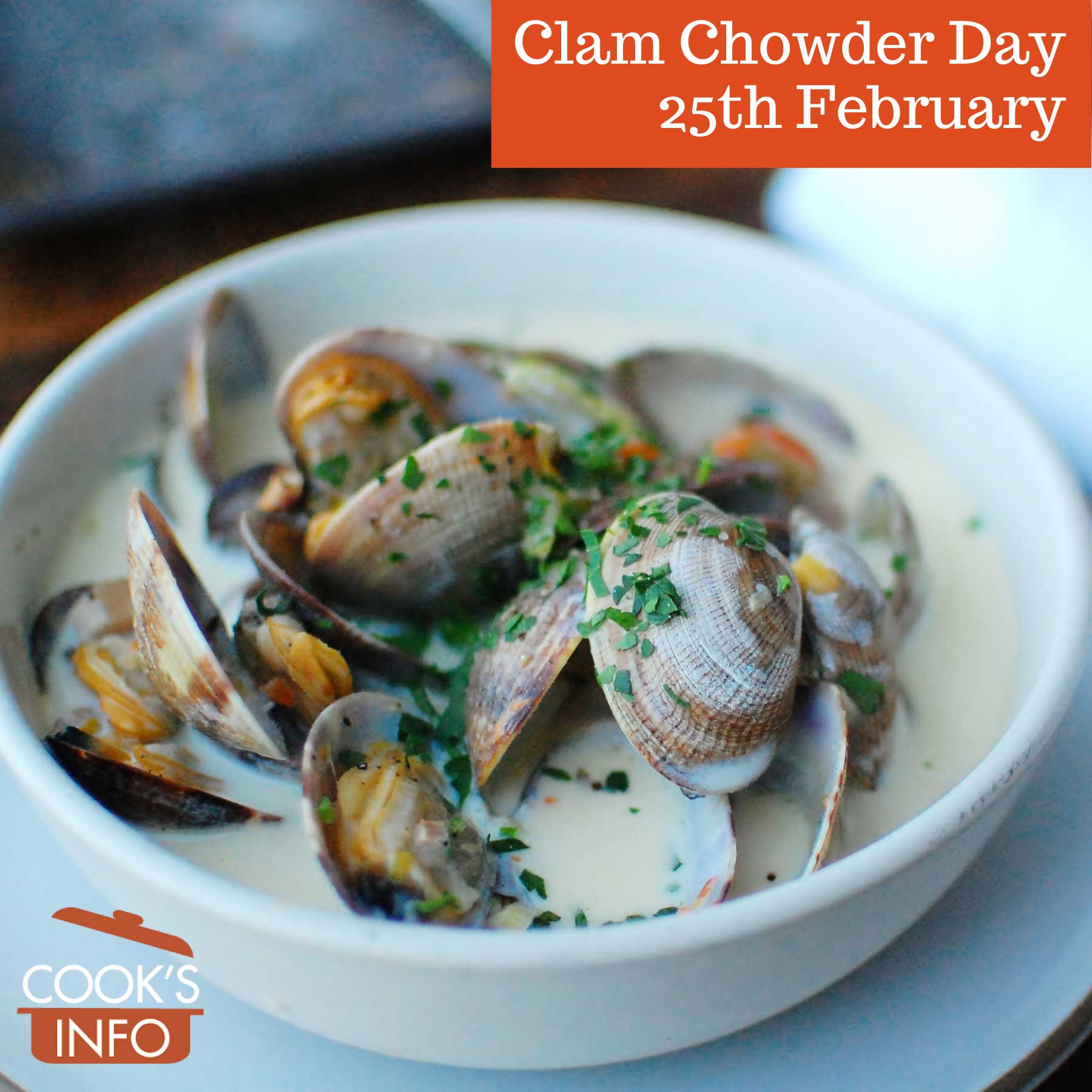 The 25th of February is Clam Chowder Day.

This fish stew featuring clams can be perfect for this time of year in the northern hemisphere!

It is a true American dish, but even within America no one can agree on how clam chowder should be made: there are several different regional styles (Manhattan style, for instance, has tomatoes)

There are at least 11 different styles in the United States:

What they all have in common though is that they are from American coastal regions — not many clams are found in Arizona!

To celebrate Clam Chowder Day, today you could:

Some restaurants may offer a buy a bowl, get one free, for dining with a friend.

The earliest reference to a Clam Chowder Day in February that CooksInfo has found in print archives dates from 2000 in New Hampshire:

“On the 25th, I know you got the family together to celebrate two important honorary days, “National Chocolate Covered Peanut Day”, and “International Clam Chowder Day”, which is a great day in New England, unless you’re a clam, and a day when you quickly discover you’ll need a barf bag if you celebrate both together.” (Jacobs, Larry. Talk about big days, and each important! Nashua, New Hampshire: The Sunday Telegraph. 27 February 2000. Page D-2, col. 2.)

Herman Melville dedicated most of a short chapter in Moby Dick to the topic of clam chowder:

“Queequeg,” said I, “do you think that we can make a supper for us both on one clam?”

However, a warm savory steam from the kitchen served to belie the apparently cheerless prospect before us. But when that smoking chowder came in, the mystery was delightfully explained. Oh! sweet friends, hearken to me. It was made of small juicy clams, scarcely bigger than hazel nuts, mixed with pounded ship biscuits, and salted pork cut up into little flakes! the whole enriched with butter, and plentifully seasoned with pepper and salt. Our appetites being sharpened by the frosty voyage, and in particular, Queequeg seeing his favourite fishing food before him, and the chowder being surpassingly excellent, we despatched it with great expedition: when leaning back a moment and bethinking me of Mrs. Hussey’s clam and cod announcement, I thought I would try a little experiment. Stepping to the kitchen door, I uttered the word “cod” with great emphasis, and resumed my seat. In a few moments the savoury steam came forth again, but with a different flavor, and in good time a fine cod-chowder was placed before us.

We resumed business; and while plying our spoons in the bowl, thinks I to myself, I wonder now if this here has any effect on the head? What’s that stultifying saying about chowder-headed people? “But look, Queequeg, ain’t that a live eel in your bowl? Where’s your harpoon?”

Fishiest of all fishy places was the Try Pots, which well deserved its name; for the pots there were always boiling chowders. Chowder for breakfast, and chowder for dinner, and chowder for supper, till you began to look for fish-bones coming through your clothes. The area before the house was paved with clam-shells. Mrs. Hussey wore a polished necklace of codfish vertebra; and Hosea Hussey had his account books bound in superior old shark-skin. There was a fishy flavor to the milk, too, which I could not at all account for, till one morning happening to take a stroll along the beach among some fishermen’s boats, I saw Hosea’s brindled cow feeding on fish remnants, and marching along the sand with each foot in a cod’s decapitated head, looking very slipshod, I assure ye…