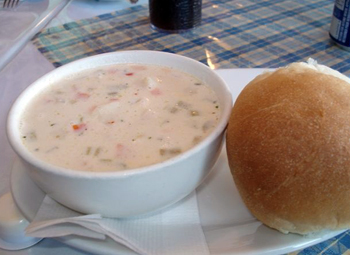 Chowder is a seafood or fish soup thickened with milk, cream or a white sauce.

Clam Chowder is the most usual, but there are also Lobster Chowders, Cod Chowders, and Corn Chowders. In the Bahamas, they make a Chowder from conches.

Chowders usually include potatoes and onions. Everything is left in small chunks (small enough to fit easily on a soup spoon.)

In New England, a piece of salt pork is often added to a Chowder. In Nova Scotia, Canada, saltine cracker crumbs are often used to thicken it further.

Be mindful of stray fish bones that might have made it into a fish chowder — it has been known to happen, and they aren’t easy to see in the thick creamy soup. If you are the cook, make a special effort to look out for them.

One theory about the history of Chowder is that fisherman from France (Brittany) would cook up a bunch of fish in a stew. It’s assumed they carried their way of doing it to the Maritimes of Canada, from whence it spread down into New England. Old recipes don’t mention removing the fish bones, but it was just assumed that you would know enough to do that. 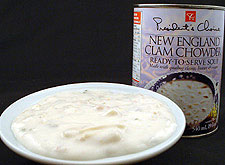 It was tuneful, every spoonful made you yodel louder
After dinner Uncle Ben used to fill his fountain pen
From a bowl of Mrs. Murphy’s chowder.

The word “Chowder” may come from the French word for pot or cauldron, which is “chaudière”.

This web site generates income from affiliated links and ads at no cost to you to fund continued research · Information on this site is Copyright © 2022· Feel free to cite correctly, but copying whole pages for your website is content theft and will be DCMA'd.
Tagged With: American Food, Canadian Food