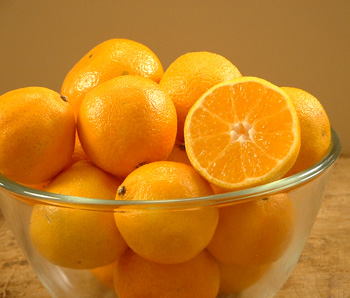 Clementines are small, thin-skinned oranges that are very easy to eat. The skin peels off easily, and the sections inside separate with a minimum of effort. They will have few seeds and often can be seedless even, if bees are kept away from the tree’s blooms.

Their size and ease of eating makes them ideal for children.

Most Clementines today (2004) are exported from Spain.

Owing to the thin skin, very hard to zest.

Store up to 2 weeks, refrigerated. Don’t put in a plastic bag.

Clementines are a hybrid between the tangerine and a bitter orange, possibly the Seville. One theory holds that the orange was discovered in 1902 in Misserghin near Oran, West Algeria by a French missionary named Clement Rodier (and thus the name, Clementine). Some botanists feel, however, that even if Rodier did “notice” them, that they had developed in Asia long before that and found their way to the Mediterranean via the vagaries of human commerce.

In any event, Spain began commercial production in regions such as Valencia and Castellon, and remains the leading producer today (2004).

The oranges were first imported on a large scale to North America in the 1980s, at a time when there was a shortage of oranges owing to a Florida freeze. Without the freeze and the consequent shortage of domestic oranges on the North American market, Clementines would have remained “frozen out” by protectionist tariffs. But Clementines got in, and they were such a hit that it was impossible to close the door afterwards.

Brown, Ian. Ian Brown tries to give out oranges: A somewhat sad but true holiday tale. Toronto: The Globe and Mail. 23 December 2010.