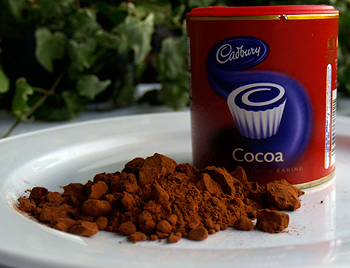 Cocoa is a chocolate powder.

When a recipe calls for Cocoa, assume it means unsweetened, as opposed to a sweetened mix of Cocoa for drinking.

The Cocoa butter that is removed from chocolate to make cocoa is often used to make white chocolate.

You can get dark or regular light Cocoa Powder.

Light (aka regular, “un-Dutched”) Cocoa powder is lighter in colour and has a sharper, less-rounded flavour than the dark. It has a pH of about 5.5.

The dark cocoa powder is “dutched”, and more expensive. It is regular cocoa powder to which a small amount of alkaline (usually potassium carbonate) is added. This raises the pH of the cocoa powder from 5.5 to 7 or 8, depending on how much is added, making it less acidic (not that it’s very acidic to start with — a pH of 7 is considered neutral by science.) This also deepens the colour, and helps it mix more easily with liquid. To most people’s taste buds, it also improves the flavour making it taste better.

Though regular cocoa powder is slightly more acidic, the acidity difference between it and Dutched is not enough to make any kind of difference in baking in terms of the chemical reaction. Despite what many cookbooks will tell you, the two are indeed interchangeable. Disregard any advice about which one to use with baking powder versus baking soda, etc., and the need to have both in the house.

Why cocoa is brown

Carob powder can be substituted for the look of Cocoa Powder, but not the taste. You can fool your eye, but not your tongue.

To use Unsweetened Baking Chocolate when a recipe calls for Cocoa, try to find somewhere in the recipe that you can remove 1 tablespoon of fat.

Store in a sealed container at room temperature out of the light for up to two years.

In 1828, a Dutch man named Van Houten invented Cocoa powder, and the process of “dutching” the powder.

“The deluxe Dutch process coca, made for many years by Walter Baker and Company for the ice cream trade and the better soda fountains of the country, has gone into retail distribution, appearing for the first time in food specialty shops of the city. R. H. Macy, Broadway and 34th, for one, has the product, priced at 22 cents for a half-pound. This domestic-made cocoa offers all the fine points of the Holland imported of pre-war years, but is lower in price.” — Paddleford, Clementine (1898 – 1967). Food Flashes Column. Gourmet Magazine. June 1944.

This web site generates income from affiliated links and ads at no cost to you to fund continued research · Information on this site is Copyright © 2023· Feel free to cite correctly, but copying whole pages for your website is content theft and will be DCMA'd.
Tagged With: Cocoa