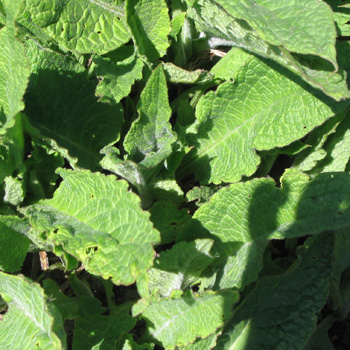 Comfrey is related to the herb Borage and to the flowers called “Forget-me-nots.”

A perennial herb that is frost and drought resistant, it can grow over 3 feet (1 metre) tall. It produces bell-shaped flowers of various colours, depending on the variety.

When the leaves are young they are bitter, but when old they are coarse in the mouth, and very unpleasant.

It is no longer recommended that this be an herb you eat on a regular basis.

Since about the mid 1980s, Comfrey has been suspected of being carcinogenic. In 2001, the American Food and Drug Administration (FDA) issued an advisory that all products containing Comfrey be removed from sale. Health Canada issued its advisory, recommending against even external medicinal use, in December 2003.

Up till them, Comfrey had been considered nutritious as an herb and a salad green, because it contained some protein, and some trace amounts of vitamin B12. Vitamin B12 is extremely rare in plants; it usually only comes from animals, and though our bodies need it, they can’t make it. You would have to eat about 4 pounds (1.8 kg) of Comfrey a day, though, just to get the daily minimum recommended amount (Australian study, 1983.) On the plus side, Comfrey does contain weight for weight about as much protein as average members of the legume family. 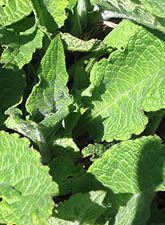 Native to Europe and Asia. Both the Greeks and the Romans used Comfrey medicinally.

Most Comfrey grown in North America is called “Quaker Comfrey”. Introduced via Canada in 1954, it is a hybrid between the two other types of Comfrey, Common Comfrey and Prickly (or Russian) Comfrey. It was called “Quaker” because it was developed by the Henry Doubleday Research Association. Henry Doubleday was a Quaker. It is also called “Bocking Comfrey” as it was developed by Lawrence D. Hills in the early 1950s in Bocking, Essex, just outside Braintree, which was the original base of the Association.

Common Comfrey was brought to North America much earlier than Quaker Comfrey by English immigrants, for use as a folk medicine.

In the UK, both Common and Prickly are grown (the Prickly was introduced into the UK about 1811 by Henry Doubleday from Russia.)

In folk medicine, Comfrey was thought to aid in broken bones healing back together. Its name, Comfrey, comes from an allusion in Latin to this: con firma.

This web site generates income from affiliated links and ads at no cost to you to fund continued research · Information on this site is Copyright © 2022· Feel free to cite correctly, but copying whole pages for your website is content theft and will be DCMA'd.
Tagged With: Ancient Greece, Essex Food