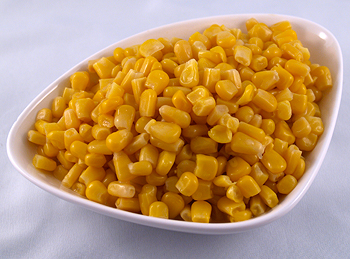 The old spelling of corn was Korn, from the Germanic; Kernel is a diminutive form, to mean a small grain.

Niblets is a trademarked name that Green Giant uses to describe the fresh corn kernels it sells in North America and in the UK. Many North Americans use it colloquially as a generic name to describe fresh corn kernels. Technically it’s not the whole kernel of kernel, because when the kernels are shaved or cut off, the germ remains on the cob — the same as what you see remaining when you eat corn on the cob.

People in the UK don’t generally recognize the word “niblets” or know what it means, even though it’s all over the tins of Green Giant sweetcorn that they see every week in their grocery aisles — but awareness of the word hasn’t sunk in. They’ll deny there’s any such thing there, which means they didn’t pay attention last week in the tinned goods aisle at Tesco’s or Sainsbury’s. Whereas in North America, it’s sunk in to such an extent that it’s come to be used by consumers at least as a generic word for kernels of sweetcorn.

To make your own: husk the corn, wash it, hold the cob of corn upright in a shallow bowl or over a big plate and use a sharp knife to cut downwards to cut the kernels off. Mind the knife slipping; this needs a bit of attention as you have one hand out of action holding the corn. Better yet, use a (very clean) shoehorn. It does a better job, and is safer. After the kernels are cut off, just use your fingers to separate them.

This web site generates income from affiliated links and ads at no cost to you to fund continued research · Information on this site is Copyright © 2022· Feel free to cite correctly, but copying whole pages for your website is content theft and will be DCMA'd.
Tagged With: Corn