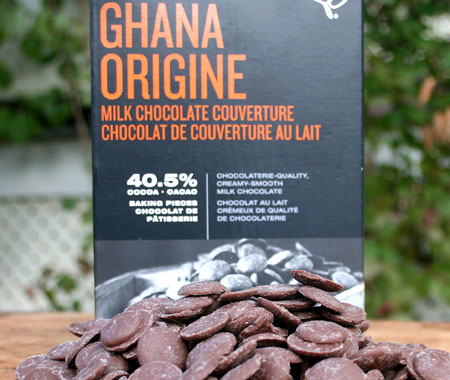 Couverture Chocolate is chocolate that is used to form a thin covering of chocolate on food items.

It can be used for coating, dipping, or garnishing. Items may be coated either by dipping them in the chocolate, or by pouring the chocolate over them, or by swirling the chocolate to coat the insides of a mould before the food item is placed in the mould.

It is made of chocolate liquor (up to more than 70 %), and cocoa butter (32 to 39%, sometimes up to 44%.) The high percentage of cocoa butter gives the chocolate a pronounced sheen, and causes it to snap more when bitten into or broken into.

It flows well when melted because of its high cocoa butter content. Other forms of chocolate, such as chocolate chips, which have a lower amount of cocoa butter, tend to hold their shape more when melted and not flow as well.

The chocolate may be semisweet, bittersweet, white or milk chocolate. Commercially, it is sold to manufacturers in chips, chunks, liquid or wafer form.

Don’t use Couverture Chocolate as an ingredient in something when another type of cooking chocolate is called for: it won’t do the same job, because of the increased cocoa butter in it. Plus, it’s too expensive anyway to use just as an ingredient.