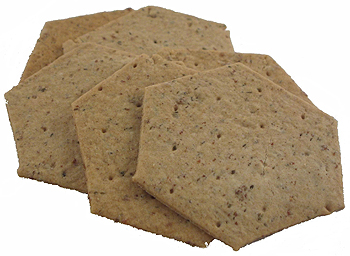 A Cracker is a dry, thin, unsweetened, flat biscuit. You can also think of it as a dried flat bread.

Crackers can be leavened or unleavened. Saltines are sometimes called “soda crackers” because of the baking soda used in them.

Though the word Crackers is also used in the UK, it is used to refer to specific products such as Jacob’s Cream Crackers and Ritz Crackers rather than as a generic term. In the UK, crackers are called savoury biscuits or cheese biscuits.

The word ‘cracker’ is an insult in the American South. Generally, it means you are a hick, shoeless and without an education.

Most Crackers are quite brittle. When you break one, it will make a cracking noise, and perhaps the name was coined because of that. The OED shows the word Cracker first appearing in the US about 1739, but by the 1830s the word also showed up in Royal Navy food inventories.

This web site generates income from affiliated links and ads at no cost to you to fund continued research · Information on this site is Copyright © 2022· Feel free to cite correctly, but copying whole pages for your website is content theft and will be DCMA'd.
Tagged With: American Food, Crackers