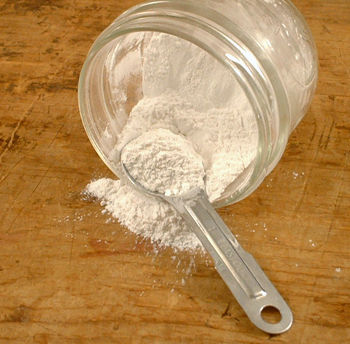 Cream of Tartar is a white powder that is a by-product of making wine. It forms as tartaric acid flakes on the inside of the caskets. In this initial state, it’s brownish-red and is called argol. It’s removed, refined so that it becomes white and so that the “potassium salt” is extracted, then finely ground into a powder.

Cream of Tartar is the ingredient most often used in baking powder to provide the dry acid in it that reacts with the baking soda when wetted, then heated. It’s one of the few acids in the kitchen that come in a powder form.

Though not a spice at all, it is always sold in the spice section of stores. You can buy it in bags, tins or jars.

This is another name for the Baobab tree. The pulp of the pods is sour and slightly acidic (as is the pulp of tamarind pods); sour enough that it can be used to curdle milk or act as a substitute for Cream of Tartar.

Cream of Tartar can make sugary things seem creamier (the acidity prevents sugar in them from crystallizing).

If a recipe calls for Cream of Tartar along with baking soda, chances are it’s quite an old recipe — more modern recipes would just call for baking powder, which is a combination of both.

1 tablespoon of lemon per 1 teaspoon Cream of Tartar.

Or, apparently you can use Baobab tree pods, though going to the supermarket to buy Cream of Tartar might be a bit less involved than hunting for a nearby Baobab tree.

Store on shelf. It will last forever. If it happens to cake up, just whiz it in a blender.