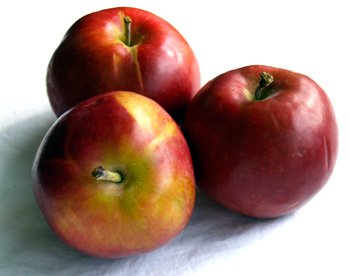 Some people think they occasionally detect a hint of raspberry in the tart flavour.

For cooking, particularly for sauce. Makes a red applesauce.

Crimson Beauty Apples were first promoted by a Francis Sharp of Upper Woodstock, New Brunswick in the mid 1800s, who developed them from a Snow apple seedling.

In the early 1900s, the apple was promoted by Stark Brothers Nursery as “Early Red Bird” (which name they trademarked.)