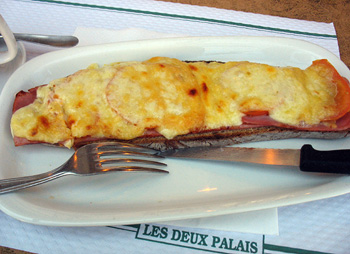 A Croque Monsieur is a cheese and ham sandwich that is fried in a frying pan or on a griddle. It is very similar to a Grilled Cheese Sandwich.

The cheese used is Gruyere; the ham needs to be lean, and the bread used is French bread, ideally, the crustless bread called “pain de mie.” If other bread is used, the crusts are removed from the bread before cooking.

The sandwich is assembled by putting the cheese and the ham in between two slices of unbuttered bread, then frying it in clarified better. It is then served hot from the pan.

We actually have a recipe from 1915 which documents the recipe as having only the ingredients as listed above (see “History” section below.) Any Croque Monsieur that involves a sauce or coating or any further or other ingredients of any kind is a variant. There is just butter on the outside. No egg wash, no sauce, no extra cheese. This, for instance, is just plain factually incorrect:

“But a true croque monsieur requires a béchamel sauce, which is how François Payard does it. His croque monsieur, based on his grandfather’s recipe, is layered with jambon de Paris, Swiss Gruyère, and a rich béchamel sauce, encased between slices of toasted white bread, and topped with more béchamel and grated Gruyère. It arrives straight from the oven….” [1]

This is not to say that there are no other versions of “croques”, as fried sandwiches in French are now called. Just that they are other kinds of croques, not Croques Monsieurs. Some standard variations have been named:

McDonald’s France makes a version of a Croque Monsieur. Theirs, called a “Croque McDo”, is made with two round pieces of bread. It is buttered and fried, and has just ham and cheese in it.

Disregard stories about French workers leaving their lunches by radiators because they didn’t have refrigerators. Any worker who valued his lunch, and who more than a French worker, would know the difference between a heat-producing device and a cooling one.

In America, variations trying to pass themselves off as the definitive Croque Monsieur appeared as early as the 1940s:

“This is the sublimated [Ed: sic] ham sandwich: CROQUE MONSIEUR. Cut the crusts off thin slices of bread and spread each slice with a mixture of grated Swiss cheese and some thick cream, well mixed to make a paste. Place a thin slice of ham between each two slices of bread and dip these sandwiches in egg, then fry in butter. Serve with a beautiful cream…” [101] Chamberlain, Samuel. Clémentine in the Kitchen. New York, NY: Hastings House. 1943. Page 123.

The version listed above, in fact, was essentially what would become known as a Monte Cristo sandwich.

“Kern (Ed Kern, owner of a French restaurant in Manhattan—ed.) loves to debunk any mystery surrounding French recipes. For instance, there’s something called ‘croque monsieur’ listed on his luncheon menu. It’s a valid French specialty. It also turns out to be a ham and cheese sandwich. “The French serve it either as an hors d’oeuvre or as a luncheon dish,” Kern explained. “Trim the crusts from white bread, then butter it on both sides. (He emphasized that buttering each slice of bread on both sides was a necessary part of the recipe.) ‘Then put lean boiled ham and Swiss cheese between the buttered slices and fry the sandwich quickly in butter until it is golden brown.” And there you have the mysterious sounding “croque monsieur.” — Ruston Daily Leader. Ruston, Louisiana. 11 November 1949. Page 4.

In the 1970s, Margo Oliver, the food editor of Weekend Magazine, directed her readers to make their Croque Monsieurs with a cheese sauce in the middle, and to bake it. [Oliver, Margo. Heroic Sandwiches. Weekend Magazine. 7 January 1878. Page 18.]

“ENTRÉE (CROQUE-MONSIEUR): Cut out some rounds of crumb of bread, of equal size, with a tin cutter; or, failing that, with a wine-glass. Butter all the rounds and sprinkle them with grated cheese–for preference with Gruyère. On half the number of rounds place a bit of ham cut to the same size. Put a lump of butter the weight of egg into a pan, and fry with the rounds in it, till they become golden. When they are a nice color, place one round dressed with cheese on a round dressed with ham, so as to have the golden bread both above and below. Serve them very hot, and garnished with fried parsley.” — E. Defouck in The Belgian Cookbook. Compiled by a Mrs Brian Luck. 1915.

“The Croque Monsieur is a ham and cheese sandwich; the Croque Madame, a sliced chicken and cheese sandwich. The techniques for making them are formalized in the following recipes …. Croque Madame : (A baked sliced chicken and cheese sandwich) Fellow the recipe for the Croque Monsieur, but substitite two or three thin slices of cooked white meat of chicken for the ham.” [Ed: Claiborne adds to the recipe the seemingly unnecessary step of then baking a sandwich already hot out of the skillet:] “Cook the sandwich on top of the stove until the bottom is nicely browned. Turn the sandwich over and immediately put it in the oven. Bake it just until the filling is piping hot and the cheese has melted. If desired, trim the sides.” — Claiborne, Craig. French sandwich is croqued. Long Beach, California: The Independent. 9 August 1973. Page F-12.

Julia Child acknowledged variations, but in the end, with her instinct for French food at its purest, steered her readers to the simple classic one:

“Famous recipes like bouillabaisse and the upside-down apple tart Tatin tend to take on frills through the years. Who is to say, for example, among the many existing versions, what was the original of CROQUE MONSIEUR? I suspect it was the simple one — a slice of ham between 2 slices of cheese then sandwiched between 2 slices of fresh white bread, and slowly sauteed in butter. But there are more elaborate methods,such as grating the cheese and blending it with a thick cream sauce, or dipping the assembled sandwich in beaten egg, either sauteing or deep-frying it, and serving it with a cheese sauce.

Since there is no known classical rule to guide us, however, the cook should feel free to adapt to circumstance, cheese, and mood. I prefer Mozzarella to Swiss cheese, by the way, since I find its softer consistency blends more meltingly with the ham, the butter,and the bread. But if all I have is stale, hard, underaged Swiss, I have no hesitation in grating it, and I combine it with Dijon mustard, butter, droplets of creme fraîche, pepper, Tabasco, and Worcestershire. Here is the plain version, with its delicious primal taste of ham, cheese, and bread all browned leisurely in the best butter:

Film a frying pan with ⅛ inch of the clarified butter, heat to bubbling, and brown the sandwiches rather slowly (2 to 3 minutes) on each side, so the cheese will melt; add more butter as needed. For appetizers, cut the sandwiches in quarters or eighths. If done ahead, arrange on a baking sheet and set aside, covered with plastic wrap. Uncover and heat in a 375-degree oven 5 minutes or so before serving.

Some say CROQUE MADAME is cheese flavoring only, some make it like Monsieur but substitute chicken for ham. I like ham and cheese, but you should feel free to do what you wish since there is no set recipe, and the process is the same whatever you choose.” — Child, Julia. From Julia’s Kitchen. Albuquerque, New Mexico. Albuquerque Journal. 26 July 1977. Page A-7.

“Croque” means “crunchy”; “monsieur” means “Mr”, so the name essentially means, as it were, Mr Crunchy.

The plural can be either “croque monsieurs” or “croques monsieurs.”

Colloquially often just referred to as a “croque.”