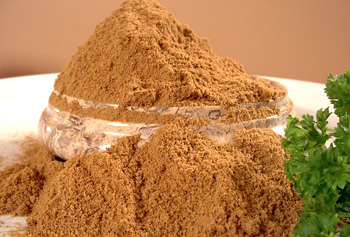 Cumin is a member of the parsley family. As such, it’s even related to the weeds called Cow’s Parsley and Queen Anne’s Lace that we pass everyday.

It’s an annual plant that grows about a foot (30 cm) tall. Cumin seeds are actually the fruits of the plant.

Sometimes, is referred to in other European languages as “White Cumin.” This is to distinguish it from Black Cumin, to which it is indeed related, but which has smaller seeds and is a bit sweeter.

Cumin is a part of almost every chili powder mix. It is also a part of Indian spice mixtures such as Garam Masala, Panch Phoron and Sambar Podi. In India, the seeds are usually heated before using to wake up the flavour.

Cumin was very costly all through history up until the 20th century. Though it was a common spice in Europe during Roman times, it was too expensive for the common people: the likes of us would never have tasted it.

Cumin is native to Upper Egypt and surrounding areas. Egyptians were growing it in 3000 BC. It is mentioned in both the Old and New Testaments (Isaiah 27. 25 and 27, and Matthew 23.23).

The Romans and Greeks used Cumin as a medicine and as a cosmetic (on the skin, it can make your skin pale). The Romans also used it for cooking, and introduced Cumin to Britain and Europe where it remained popular until the Middle Ages. The Roman food writer, Apicius, left behind a recipe for Pear Omelette (Patina de piris) that used Cumin. Antoninus Pius (Roman Emperor from 138 to 161 AD) earned the nickname “cumin seed splitter”, as he was an old-fashioned Roman who believed in frugality and economizing. (Some food writers repeat each other’s error of saying that the name was applied to his heir, Marcus Aurelius, because of his “avarice”. But Aurelius’s nickname was actually “The Philosopher”, and anyone who has studied his life or read his works would dismiss that out of hand.)

Though Cumin still seems like a “new” and “foreign” spice in the UK, in fact, it was very popular in England during the Middle Ages until caraway pushed it off the scene. Cumin remained popular in Spain much longer, and it’s owing to its use by the Spaniards at the time of the conquest and settlement of Latin America that it became and remains a popular spice there in cuisines such as Mexican cooking.

The English word “cumin” comes from the Latin “cuminum”, which in turn came from the Greek “kyminon”.

This web site generates income from affiliated links and ads at no cost to you to fund continued research · Information on this site is Copyright © 2023· Feel free to cite correctly, but copying whole pages for your website is content theft and will be DCMA'd.
Tagged With: Ancient Egypt, Ancient Greece, Indian Food, Mexican Food