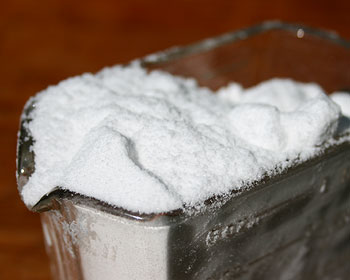 Dextrose is a form of glucose that occurs naturally. It has about 70% of the sweetness of sucrose.

It is called “glucose” in the medical field, “dextrose” in the food field. Older medical texts would have used the word “glucose.”

The scientific formula is “C6H12O6.” It is a ring composed of 5 carbon atoms plus 1 oxygen atom, with a 6th hydrogen atom attached outside the ring to one of the carbon atoms in the ring.

When joined with fructose, dextrose will form “sucrose.”

Dextrose is extracted from starch. The starch can come from any kind of plant, such as arrowroot, cassava, potato, rice, sago, wheat, etc. In North American, corn is the most common (and practically only) source. For this reason, it’s sometimes referred to there as “corn sugar.”

The starch being used is heated to near 212 F (100 C), and held there for 1 to 2 hours. This causes carbohydrates to form (this is called “hydrolyzation.”) Then, an enzyme is added called “Aspergillus niger.” The reaction caused by the enzyme will convert the carbohydrates to about 96% dextrose in 1 to 4 days.

Then the mixture is filtered, and concentrated to produce a liquid dextrose. The liquid may be sold as a liquid, or dried and crystallized to be sold in powder form. In powder feel, it feels and looks like a semi-fine, powdered sugar.

Dextrose is used by brewers in making beer as food for the yeast. It dissolves quickly in a liquid, and is readily available as a food to living organism from humans to brewer’s yeast beasties.

Plants use Dextrose to fuel photosynthesis with.

“Dex” means “right”. When put into solution, dextrose polarizes light passed through the solution toward the right.