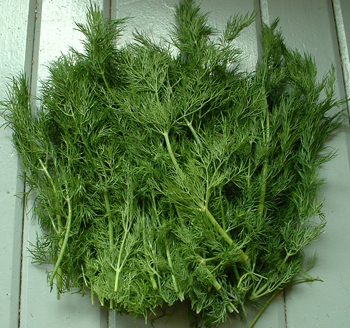 Dill is a herb that normally produces a single stalk around 60 to 120 cm (2 to 4 feet) tall with fine, wispy leaves. It puts out tiny yellow flowers in a whorl known as an “umbel” , as do its relatives Parsley, Cow’s Parsley and Queen Anne’s Lace, etc. In the fall, the flowers produce seed. Some people think that dill is a perennial. But it is not: it is just a hardy annual that will self-seed, to the point where it can take over a garden. Dill and fennel shouldn’t be planted close together, as they may sometimes cross-pollinate.

Both the wispy leaves and the seeds are used.

The wispy leaves are often referred to as “Dill Weed” and the seeds, as “Dill Seed”, though often both are referred to simply as dill and you are expected to figure out which is meant. The seeds are flat and very light. The seed has a stronger taste than the leaves. The leaves are clipped for use in the spring and early summer; in the fall the seeds are harvested.

Dill complements fish and potatoes well, and goes well in soups, speciality breads, and in dips. It goes particularly nice with potato salads and with cucumbers. In North America, it is perhaps best known for its use in producing dill pickles, a taste likely acquired from German immigrants. In the UK, dill pickles are pretty much unheard of to this day and the concept arouses great suspicion. While some people mostly associate Dill with German and Nordic cooking, it is also used in Russian, Iranian, Turkish and Greek kitchens.

If you are growing a pot or cluster of dill, it will eventually start producing clusters of yellow flowers. If you want the plant to keep on producing fronds of leaves, snip the flower whorls off. Otherwise, let it continue its natural course. The leaves will die back, but it will produce dill seed for you. You don’t have to throw out the dill flowers you snipped off: they have great flavour, even better than the seed. Use the flowers chopped up as a fresh herb.

Dill prefers to germinate slowly over a long, wet cool period, and to be just strewn on top the soil. To ensure a supply throughout the pickling season, plant a small amount first before the last frost date, then plant a bit more every few weeks until midsummer. [1]

When adding dill weed or leaves, fresh or dried, to a cooked dish, sprinkle on top or add just before the end of cooking, as heat can destroy its taste.

For the seeds, you can try caraway or celery seeds, though the taste of course will be quite different. For the leaves, try tarragon or fennel leaves.

Dill is native to the Mediterranean region and Southern Russia (some say Asia).

The ancient Greeks used dill a lot, even for scenting aromatic oils for burning, and for mouth washes. The Romans called it “aneth”, and would decorate their banquet halls with fresh fronds of it. They introduced it to Britain.

The English name is possibly derived from an old Norse word “dilla” or from the Anglo-Saxon “dylle”, both meaning to lull, referring to the reputedly sleep-inducing properties of a drug made from dill seed.

In the Middle Ages, dill was also one of the herbs used by magicians in their spells and charms against witchcraft. In Drayton’s “Nymphidia” are the lines: ‘Therewith her Vervain and her Dill, That hindereth Witches of their Will.’

“Clean teeth with ball of Wool dipped in honey, rinse with 1 tsp. of dill seed boiled in ½ cup of white wine.” — Hippocrates

This web site generates income from affiliated links and ads at no cost to you to fund continued research · Information on this site is Copyright © 2022· Feel free to cite correctly, but copying whole pages for your website is content theft and will be DCMA'd.
Tagged With: Ancient Greece, Seeds