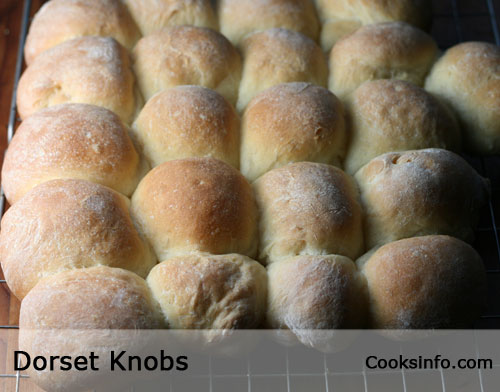 Dorset Knobs are light, crisp, dry biscuits about the size and shape of a golf ball, and a shelf life just about as long.

They are made in an English village at Stoke Mills, Marshwood Vale, in West Dorset.

Dorset Knobs are made from wheat flour, white sugar, water, oil and yeast (originally, the recipe used butter instead of oil.) They are baked, then left in the oven until dried out. The entire baking process lasts about 4 hours.

They can be split in half and buttered (though it is tricky to do so, as they may shatter when sliced), or put on a teaspoon and dunked in a cup of tea.

Today, the biscuits are made from January to March at Moores Biscuit Bakery, which is owned by descendants of the Moores.

This web site generates income from affiliated links and ads at no cost to you to fund continued research · Information on this site is Copyright © 2022· Feel free to cite correctly, but copying whole pages for your website is content theft and will be DCMA'd.
Tagged With: British Food, Dorset Food, English Breads