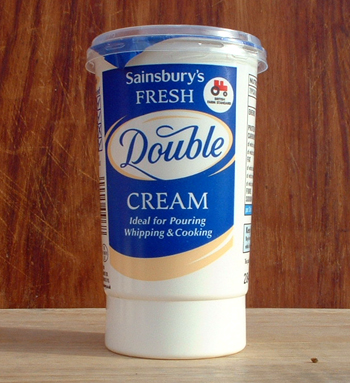 It is produced by centrifugal force to separate the butterfat from the milk.

Double Cream may be slightly homogenised under low pressure to give a little extra body.

The fat content of Double Cream is so high that it won’t curdle, which is one reason people who make fine sauces still quietly stick by it, despite today’s obsession with low fat.

It can be served as is as a thick pouring cream with fruit, pies, cake, puddings, etc. In fact, where North Americans would reach for ice cream, Brits will reach for Double Cream (or custard).

When making any hot fruit pie, pour some Double Cream through the hole in the pastry and return to the oven for 10 minutes. Nummy.

Double Cream can not only be whipped, it will whip up firmer than whipping cream, which is why fancy cake makers will prefer it to whipping cream. If you want it less firm but to have more volume, add a tablespoon of milk or an egg white per 5 oz (⅔ cup / 150ml) before whipping (this lowers the butterfat content a bit, making it a bit less dense, allowing more air in and thus more volume.) Don’t overwhip, though, or it will take on a grainy appearance, and if you kept on overwhipping, you’d practically end up with butter.

Double Cream isn’t a good substitute for regular cream in normal coffees — it will indeed try to float on the top and is very hard to stir in.

Can be frozen for up to two months, but when thawed, use for cooking rather than as a topping.

Crème double, which is sometimes used in French in France, means cream with a butterfat content greater than 30%, which makes it not as rich as English Double Cream (which weighs in at 48% and up).

Double Cream when used to refer to cheese means something else altogether; it means a minimum butterfat content of 60%.