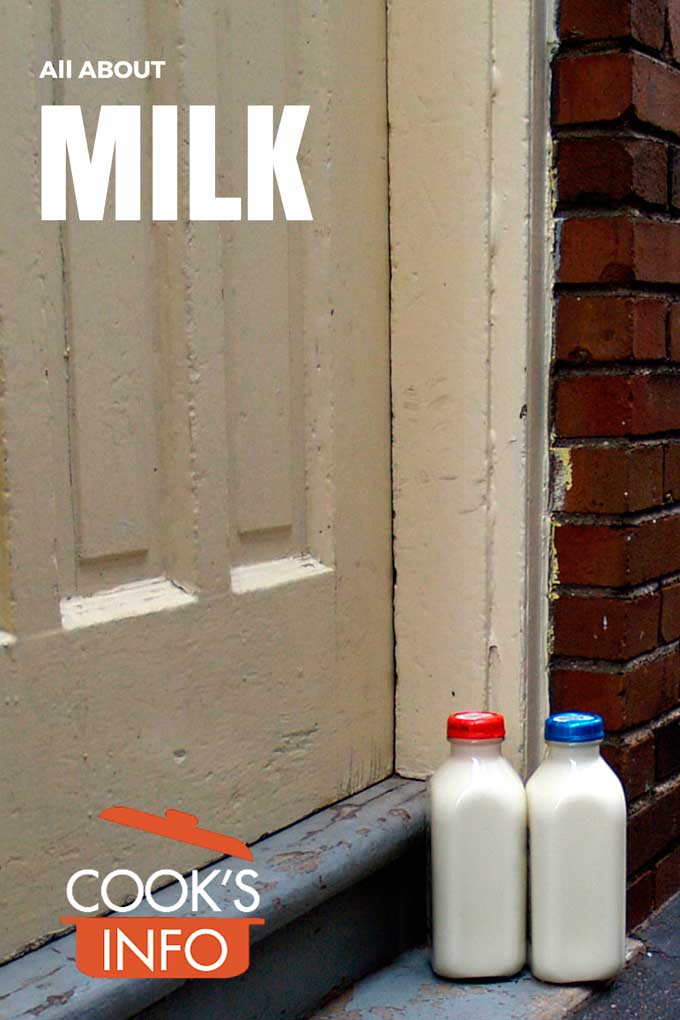 Contents hide
If a recipe calls for milk, it means cow’s milk, unless otherwise specified.

Cows can be milked year round; sheep and goats cannot.

Jersey cows have the richest milk, but the dairy industry prefers Holstein cows as Holsteins can pump out far more milk — up to a staggering 20,610 pounds (9,350 kg) of milk a year per cow.

Cows have a milking life-span of 4 years.

Whole milk is the milk that remains after the cream is removed. So, it’s not particularly “whole” at all, even though the name gives the impression that the cream has been stirred or left in.

Homogenized milk was developed in France around 1900, to prevent the cream from gathering on the top of the milk. The process forces milk at a high pressure through a small nozzle which breaks up the fat globules so that they will stay suspended in the milk, instead of rising to the top and clumping together to form what is known as “cream.”

Milk in the UK has its labels and bottle tops colour-coded:

The old colour scheme in the UK was:

The tops of the bottles were foil. This older scheme had been around for decades, and there may be people reading this who either remember it, or who have come across it in their reading. Milk came in pint bottles with a coloured foil bottle-cap. People would order their milk in this way: “a pint of silver top, and two red tops.” Children would flatten the foil bottle tops out to play with. Only one colour still survives from the old British scheme surveys as it was: the Gold Top Jersey & Guernsey milk.

One possibly confusing point in the new UK colour scheme is that green can also be used for raw milk.

There does not appear to be any consistent colour-coding scheme in Canada or in America, though in Canada a red is often used for whole milk, dark blue for 2%, and light blue for 1% or skim. (You cannot, however, rely on that across brands.)

Comparison of terms used for different types of milk

Lactose-tolerant adults are in fact a minority of the Earth’s population, mostly those of Northern European background. Others, whose ancestors never lived off milk, don’t have the ability to digest the sugar in milk.

80% of the protein in milk is casein.

Milk can be frozen, then thawed and used as per normal. Freeze in containers that have room in them for expansion. If you are in an area where milk comes in bags, it can be frozen right in those (unopened) bags.

Frozen milk will turn yellowish — it’s the riboflavin in it crystallizing — but will return to white when thawed. 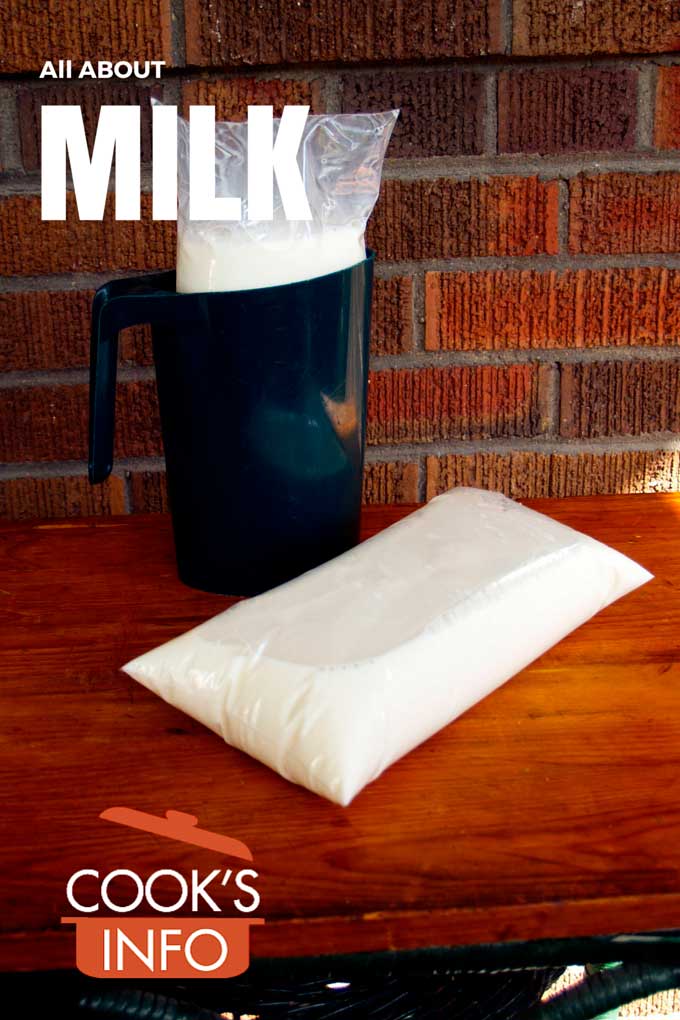 The Romans and Greeks weren’t big on milk or butter, though they were keen on cheese. But this only makes sense, as milk and butter would have spoiled quickly in their climates, whereas olive oil would keep better. In fact, milk-drinking seemed perverse to them, and they sometimes referred to northern barbarians as milk-drinkers. Wealthy Roman women did, however, use milk as a cosmetic, taking milk baths in the belief that it helped their skin.

Until the advances of the Industrial Revolution, city dwellers were justly suspicious of milk. It lost its freshness owing to the slow, unrefrigerated journeys in from the countryside. The risk of infection by diseases it might carry was often exacerbated by its being transported in open containers along the unpaved roads and through the fly-swarming streets. And without refrigeration, even if you had a near-by source of trustworthy milk, the milk wouldn’t stay that way for long. Not surprisingly, Medieval recipes rarely called for milk. milk would instead be turned into butter or cheese, which have a longer shelf-life. Recipes did, though, use a great deal of Almond milk in place of milk from livestock.

Cows arrived in St Augustine, Florida from Cuba in 1565; in Jamestown, Virginia in May 1611, and in Plymouth, Massachusetts in 1624. The first Holsteins in America arrived in 1630 in New Amsterdam, brought over by the Dutch colonists there. Holsteins, the black and white breed of cows, originated in the Netherlands.

Jersey cows first arrived in Canada in 1868; they were called “Alderneys”, and you will still see this name. That date, at any rate, is the earliest documented one: it is quite probable, however, that they were on the east coast well before then, perhaps even hundreds of years before, brought over by European fishermen. Jerseys were certainly already on the American east coast as early as 1815, as documented by correspondence that has now come to light (previously, the date for the arrival of Jerseys was thought to be 1850.)

Until the mid-1800s, dairy herds were kept in London in areas that are now Clapham Common and Hampstead Heath.

Pasteur started experiments in what was to become “pasteurization” in 1856. Chicago was the first place in the world to make pasteurization of milk mandatory in 1908. The original drive behind pasteurization was to stop the spread of Tuberculosis from cows to humans via milk. Cattle herds in North America and the UK are now essentially Tuberculosis free, but authorities continue to do routine checks to guard against re-introduction of the disease in our cattle from foreign cattle or from deer.

New Zealand abolished its Milk Board in 1988 and deregulated the fluid milk market in March 1993. In the UK, the British Milk Marketing Board was done away with in 1993 and the milk market deregulated in 1994. Australia deregulated its dairy industry on 1 July 2000. Canada is the last country in the senior Commonwealth to still have a milk-marketing board. Milk producers in Canada are only allowed to sell their milk to a state-appointed agency: to do otherwise, they risk devastating fines and imprisonment. They cannot even make cheese for sale from their own milk. The province of Quebec has 47% of the quota rights to produce milk in Canada; the remaining 53% is split amongst the other 9 provinces.

“The hours or times most approved and commonly used for milking, are in the Spring and Summer between five or six in the morning, and six in the evening. Some very unprofitably with the pretence of reason, milk their Cows in the Summer-season, betwixt the hours of twelve and one; but I would not have it to be a president for any to follow. There is an old Proverb very pertinent to what is here related; That two good meals are better than three bad ones: It is the worst point of Huswifry that can be to leave the Cow half milked; for besides the loss of milk, it is the ready way to make the Cow dry and so become unprofitable to the Dairy.” — Hannah Woolley. The Gentlewomans Companion. London. 1673.

To the Editor of the New York Times: It is apparent that the Board of Health are using every means in their power to convict men who sell milk with excessive water in it. Can you explain why their zeal for the suppression of the sale of adulterated milk does not extend further? I believe it is because they have no faith in their own tests. Nearly one-third of the milk sent to this City from Orange County is more or less skimmed, and a goodly proportion of it has the whole of the cream taken off being being shipped. This is easily susceptible of proof by visiting the creameries, all of which furnish milk dealers with skimmed milk. A part of it is sold by the dealers just as they receive it. A part of it is mixed with pure milk and dealt out in that way and the lactometer will register it at about 110. A part of it is mixed with pure milk and water, and sold in that way, it will register from 95 to 100. While the law covers the adulteration of milk by taking the cream off, as well as the watering process, skimmed milk is sold with impunity. Who ever heard of an arrest being made for selling skimmed milk, or milk with the cream taken off. I protest against the partiality shown these dealers in skimmed milk. If the Board of Health are really in earnest, and have faith in their own tests, they would undoubtedly visit the creameries or railroad stations and confiscate the skimmed milk. All will agree that it is unjust to prosecute one set of milk adulterers and let another set go scot [sic] free. — A Reader of the Times. “Skimmed milk”. New York. Friday, Dec 30, 1876. In New York Times. New York. Friday, 12 January 1877. Page 2.

This web site generates income from affiliated links and ads at no cost to you to fund continued research · Information on this site is Copyright © 2023· Feel free to cite correctly, but copying whole pages for your website is content theft and will be DCMA'd.
Tagged With: Milk