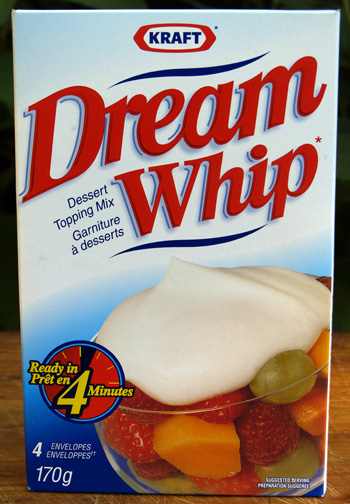 Contents hide
Dream Whip is a whipped, non-dairy topping sold in North America for desserts that is made at home by the consumer from a white powder. [1]

There are 2 packets of the powder in a small box of Dream Whip; 4 in the large box.

Dream Whip can be also used as an ingredient in recipes. Some recipes will want you to make up the Dream Whip first, others will call for the envelope’s contents to be added as a powder.

The proportions to adding it to a cake are:
1 box dry cake mix (just the powder itself)
4 large eggs
1 cup water
1 package dream whip (approximately 2.5 tablespoons)

You omit any oil or fat called for by the directions for the cake mix, but bake the cake as directed on the cake mix package. Some say that while the cake is lighter and fluffier, that they miss the oil or fat in it, and will add 2 tablespoons of oil.

Dream Whip’s equivalent powdered mix product in the UK is called Dream Topping. It, too, was a Kraft family product, until Kraft sold it off in 2005.

Dream Whip will store indefinitely as long as packets are unopened.

Store prepared Dream Whip covered in the fridge; use up within a few days.

Dream Whip was developed in house at General Foods, Birdseye Division. It was released to the market in 1957.

[1] Though the powder is generally classed as non-dairy, it contains sodium caseinate (from milk), and whey. And of course to prepare it, you have to add milk, making the prepared product decidedly dairy.