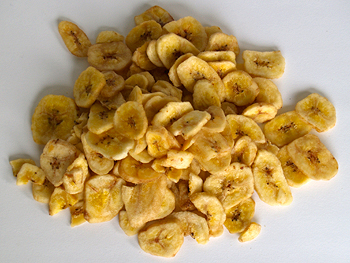 Dried Banana are pieces of banana that have been dried through various means. The banana is always peeled before drying.

The spears are sweet; use them for cooking. The chips are fried in coconut oil, making them crunchy. Dried Banana pieces that aren’t fried are mechanically dried or freeze dried. But just drying banana slices on their own won’t make them as crunchy as banana chips are. Banana chips are best for eating out of hand.

Some Banana Chips may have been processed with sulphur dioxide to stop them from browning. Some have additional sweetening added. Those without added sweetener might call themselves “banana slices”, in an effort to distinguish themselves from the sweetened banana chips, which are the most common. Additional flavouring is often added; without it, they might be as tasty as a poker chip.

You can also get whole bananas that have been peeled, then dried, and dried banana powder, produced in countries such as Brazil. The powder is used in commercial banana bread mixes, and frozen desserts.

Some varieties of whole Dried Bananas from Thailand are very dark, wide, uniformly-shaped oblong strips that have been dipped in honey. They are more like fruit leather, chewy and moist, and individually wrapped, so they are not overly “environmental.” They used to be sold just all wrapped together, but once opened they only keep a few days.Dried Banana is not necessarily kosher, because it’s been found that employees at some processing plants were frying up their own lunches in the oil.

A home dehydrator is considered by many the best and most reliable way of drying bananas at home. When dried in a fruit dehydrator, the texture will be more like fruit leather, and more of the natural flavour will come through. Lemon juice can be brushed on the pieces before drying to help lessen the darkening. A honey wash, acidulated water or other citrus fruit juices will also do the trick. The drying process can take 8 to 12 hours.

To dry banana pieces in your oven, the temperature recommended is 125 to 150 F (51 to 65 C.) Put the pieces on a wire rack, then on a baking sheet. You put this sheet into the oven, and leave the oven door open a bit to allow humidity to escape. After about 6 hours, turn the pieces. Given, however, that this can take 12 to 14 hours in total, and that you’re running your oven with the door open, this can be a very expensive way of obtaining banana chips.

Sun-dried banana is problematic, unless you live in a climate that is so sun-drenched that bananas probably grow year round outside your front door, in which case one may wonder why one would bother with dried? Drying banana pieces out in the sun can take 2 to 3 days. You have to cover them with thin netting to keep the bugs off, turn 2 to 3 times a day, and bring them inside at night. It won’t work if the day turns humid or you get caught by rain.

To soften Dried Banana for baking, simmer at a low temperature in just enough water to cover them for 10 to 15 minutes, then drain.

Used rehydrated Dried Banana in smoothies and in cereals, or chill the pieces and serve on their own.

Store homemade Dried Bananas in a sealed container in the fridge.