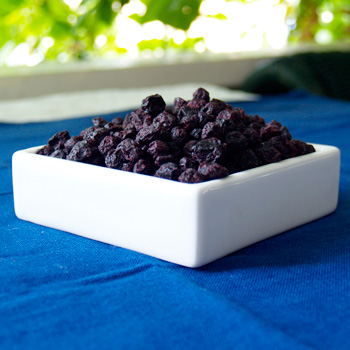 Dried Blueberries are available in both regular dried, and freeze-dried forms, sweetened and unsweetened.

Many commercial processors mix blueberries with a juice, such as apple juice concentrate, before drying them. The juice causes them to be chewy when dried, rather than hard and crispy. It also has the added bonus of adding a bit more to the weight being sold.

Dried Blueberries plump up when put into cold or hot liquid.

To dry at home: Blanch fresh berries in boiling water briefly for 45 seconds. The skins have to be cracked to allow moisture to get out. This is easiest done by immediately after blanching, popping them into a very cold water bath. Then dry: in a dehydrator, in a 140 F ( 60 C) oven, or on a screen in the sun protected from insects.

Note, though, that drying blueberries ends up to be a lot of work, and you end up with very little end product to show for it. Many of those who have tried it, say freeze them instead.