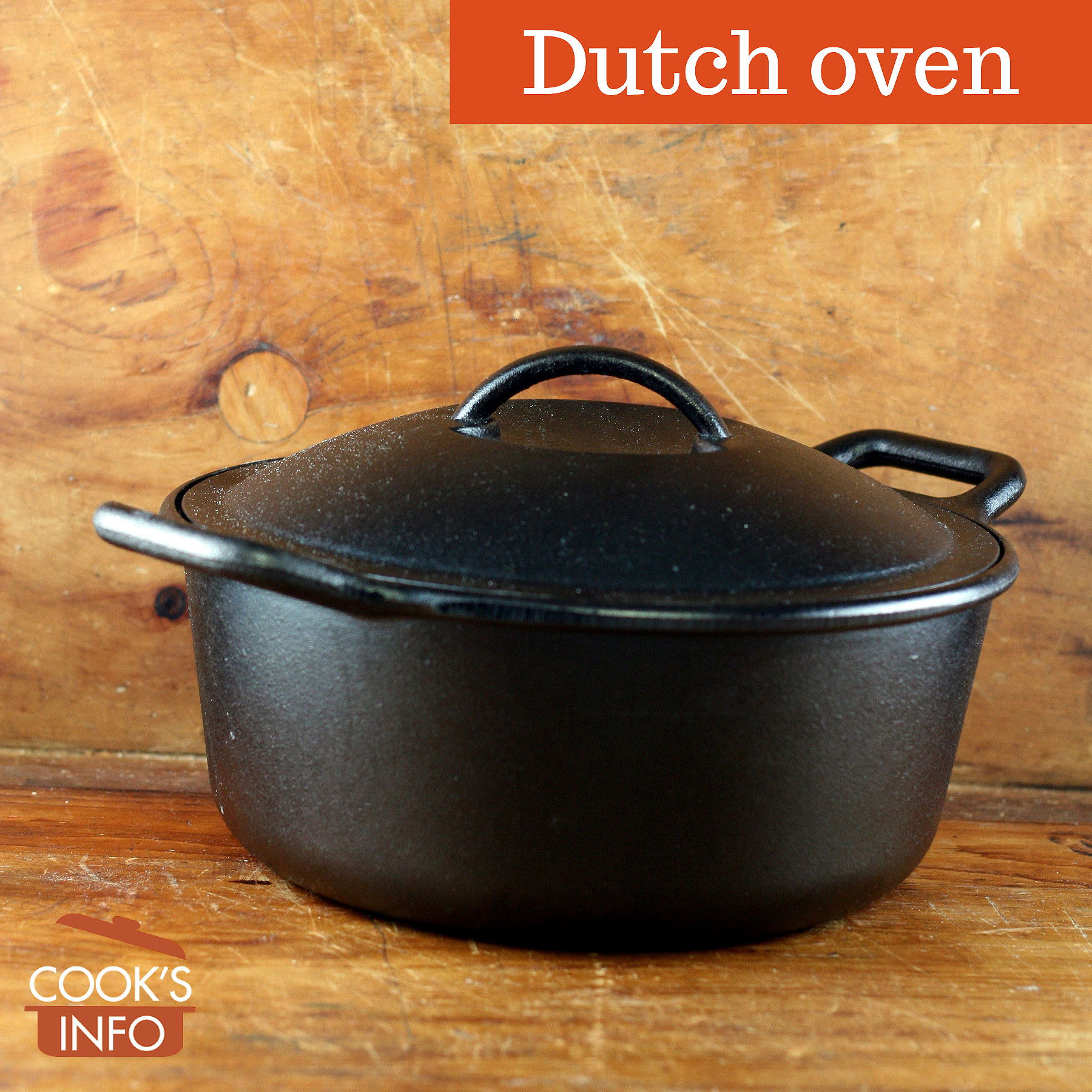 They are wide with a flat bottom, and shallow, in that they are wider than they are tall. The wide mouth makes them ideal for evaporation of water and concentration of flavours left behind. The pots are usually round, but you can find oval ones here and there.

They were traditionally made of cast iron, but most are now made of aluminum, anodized aluminum or stainless steel.

What a Dutch oven is depends on whether you ask a Boy Scout or not. There are modern, indoor models, and traditional models that can be used over open wood fires. Modern indoor ones now dominate the category, with the result that traditional Dutch ovens are now often referred to in ways such as “camping Dutch ovens.”

Modern household Dutch ovens short handles on the pots, one on each side.  They come with lids, which will also have a handle on them. The lids will be slightly domed; some lids may be glass.

Not all household Dutch ovens are oven safe. If the handles on the pot and lid aren’t plastic, then it’s probably oven-proof.

Depending on the model, you can bake, fry and stew with a Dutch oven. Dutch ovens are often used in homes for braising, stewing, and making large batches of saucy dishes like chili, and reached for when large quantities of pasta or potatoes need to be boiled. Often recipes for stews will direct you first to brown the ingredients on the stove top in a Dutch oven (with the large, flat bottom providing lots of space for browning), and then to add more ingredients and complete the cooking process in a slow oven. This of course requires a model with oven-safe handles.

Dutch ovens in the home are now mostly used as stewing pots that can go into the oven, or as the biggest pan on offer to do a big mess of mashed potato in for holiday meals. 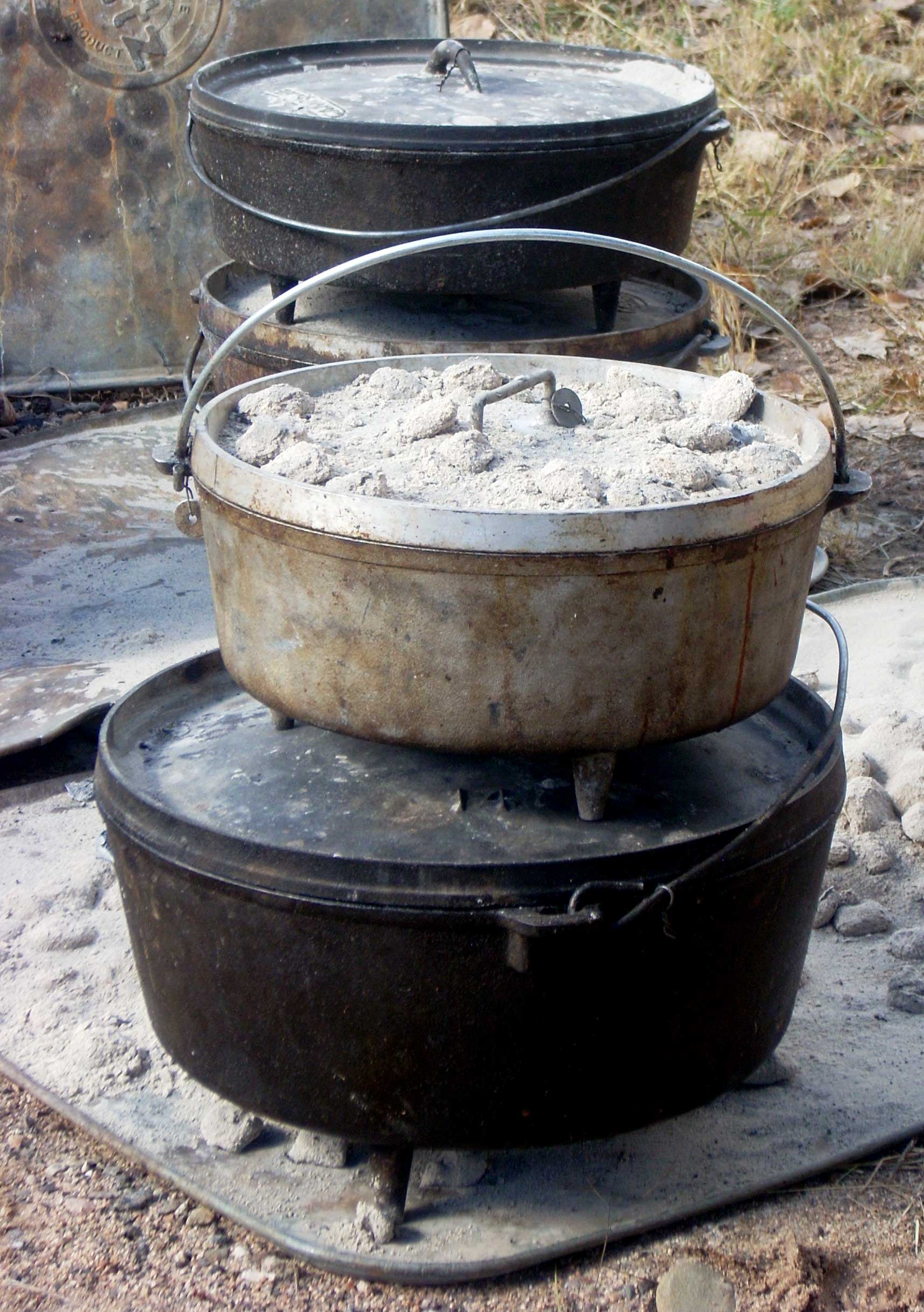 These Dutch ovens can be used over a campfire or in a hearth. Often referred to as “traditional” Dutch ovens, the handles and the lids may be different from those on modern household Dutch ovens.

Typically these campfire models have smaller handles that are hard to get your fingers into, and that’s because the pots have meant to have a “bail” handle looped through them. A bail handle is a handle like you would find on a bucket. The bail handle raises to be over top of the pot, and you can pick the whole pot up by that one handle. Such bail handles are also meant for use in for hanging the pot over a fire.

Some also have recessed lids that you can set hot coals onto so that the heat comes from both the top and the bottom, so that it indeed becomes an oven for baking in. These recessed lids are flat, with a tall rim that goes around the outside edge to hold the coals. (The ridge on the lid also helps stop ash from the top from drifting into the food when you open the pot.) Such Dutch ovens can be used with the heat coming from the top, bottom or both.  There is a metal handle in the lid to grab with a hook for lifting the hot lid off. Lids for these outdoor ones may also have nipples on their underside that condensation is meant to drip down from.

To use an outdoor Dutch oven with coals: measure (or know) the width of your pot. If your pot is 20 cm (10 inches) wide, get 20 coals ready if you want extremely low heat. Multiple this number by 2 for simmering; by 3 for boiling, baking or browning. You take your coals, and arrange them in a circle underneath the pot (but not in the centre directly underneath it.) If you are doing the x 3 for higher heat, put two-thirds of the coals on top, and the rest arrange in a circle underneath.

These campfire Dutch ovens may also have three short legs on them, so that they can stand over the coals in a campfire or in a hearth. These are often called “footed” to distinguish them from the “flat bottomed” ones without legs.

Some people say that a true Dutch oven will both have legs, and a recessed lid for coals allowing it to truly act as an oven, and that without both, whatever the pot is, it shouldn’t be called a Dutch oven at all, because there is nothing oven-like about it: it’s just a squat stew pot that can go into an oven. 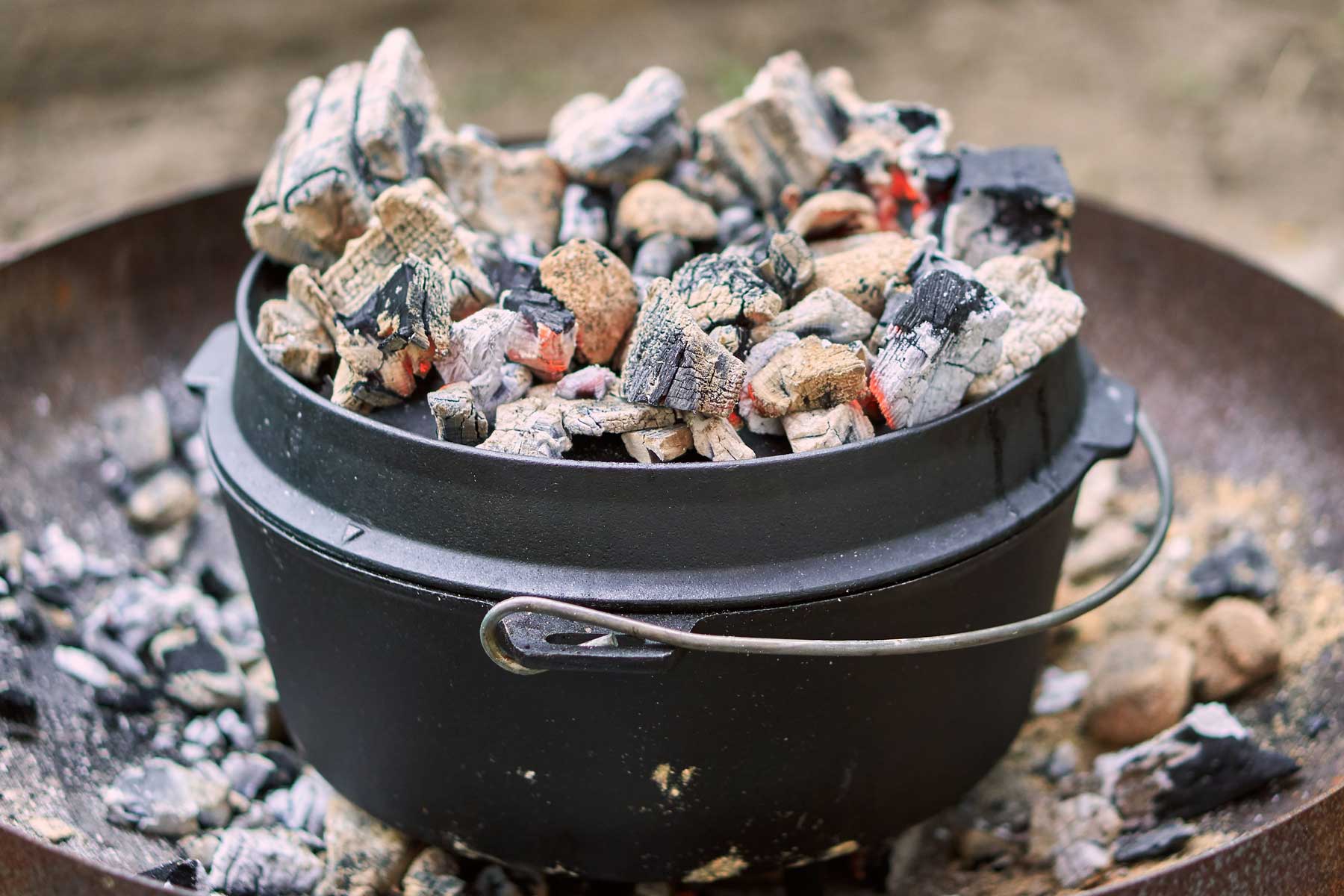 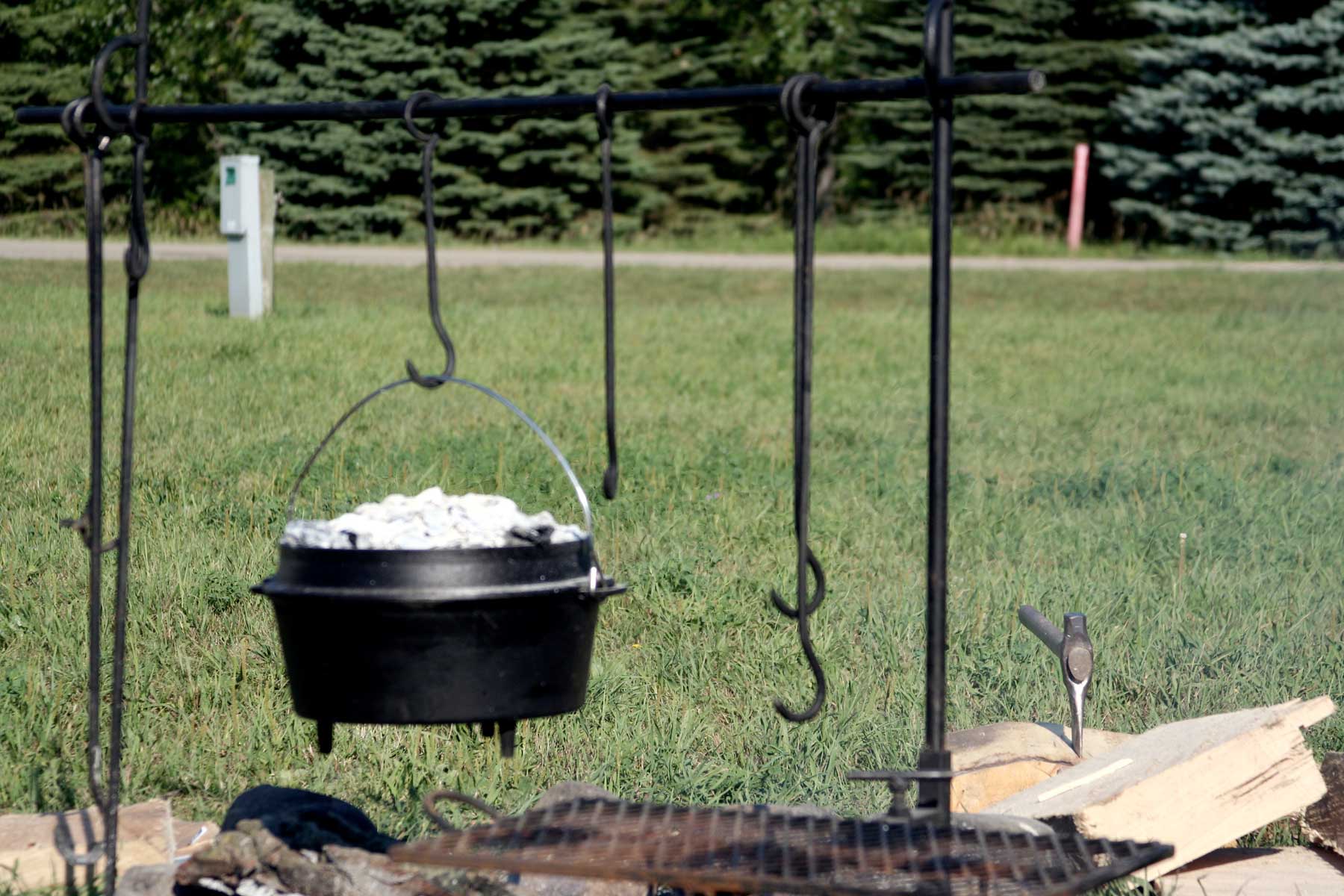 Dutch oven enthusiasts will even bake chocolate cake in them. In the 2010s, they became popular for baking sourdough bread in because by acting as a mini-oven inside a larger modern oven, they helped to retain steam around the bread for a crispy crust. 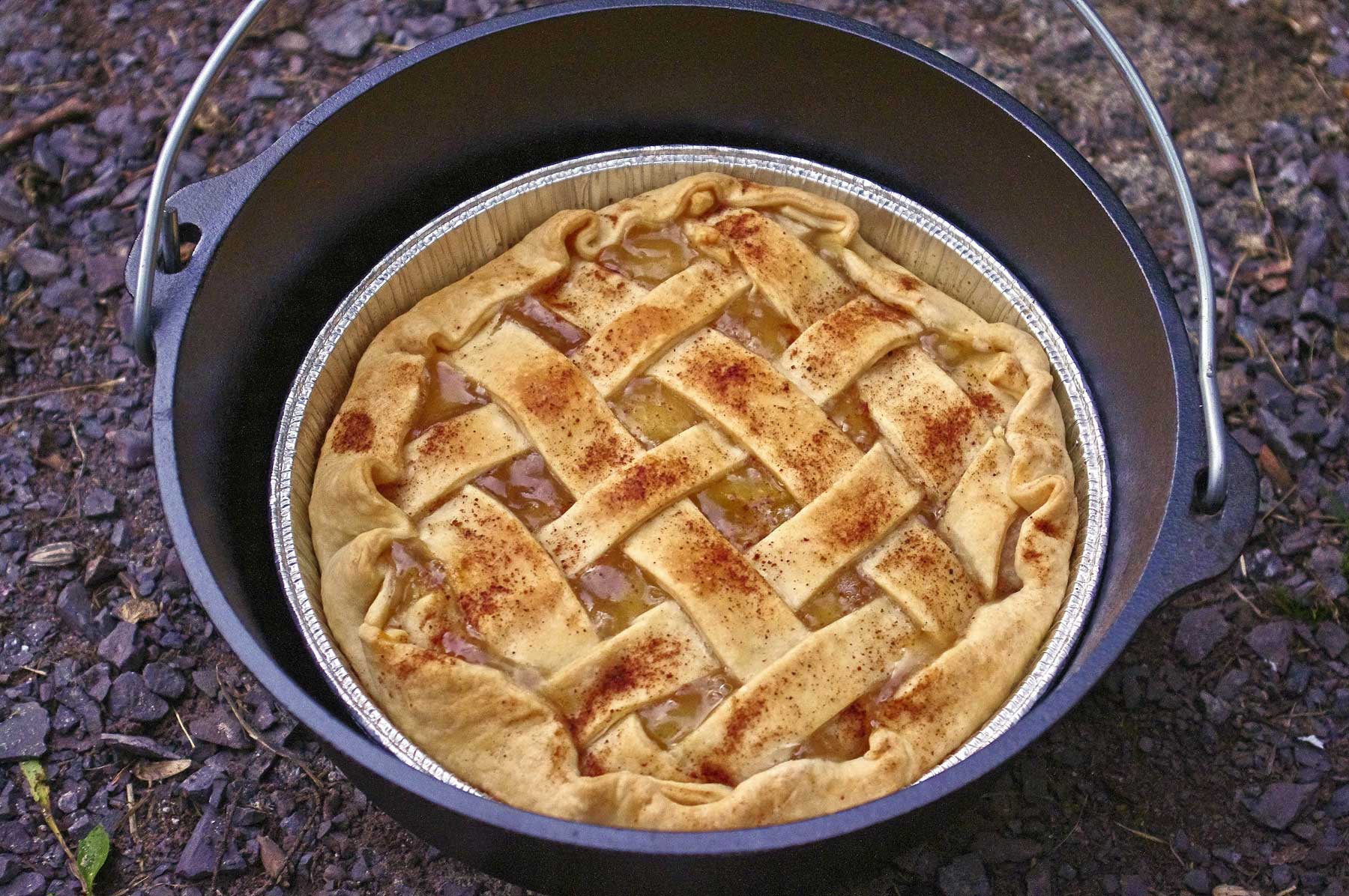 Dutch oven being used as an oven to bake a pie in. pxfuel.com / Public Domain

For home use, use your pot with the widest mouth. If your recipe calls for the pot to go into the oven and your Dutch oven isn’t oven safe, transfer the ingredients at the oven entry stage into a covered casserole dish.

A Dutch oven would have been very important for baking in at a time when there were no ovens.

Some say this type of pot was invented by Paul Revere, but that’s a myth. He was a silversmith, and didn’t have a foundry. Besides, pots like this date back centuries in Europe.

The Dutch oven was declared the “Official State Cooking Pot of Utah” in 1997 by the Utah House of Representatives through House Bill 203, sponsored by Representative Craig W. Buttars: “The Dutch oven is selected and designated to be the state cooking pot of Utah.” A legislative review note adds: “A limited legal review of this bill raises no obvious constitutional or statutory concerns.”

The Dutch certainly don’t call it a “Dutch oven”, and are always asking in a bewildered fashion what it is.

There are only theories as to where the name came from.

This web site generates income from affiliated links and ads at no cost to you to fund continued research · Information on this site is Copyright © 2022· Feel free to cite correctly, but copying whole pages for your website is content theft and will be DCMA'd.
Tagged With: Ovens, Pots