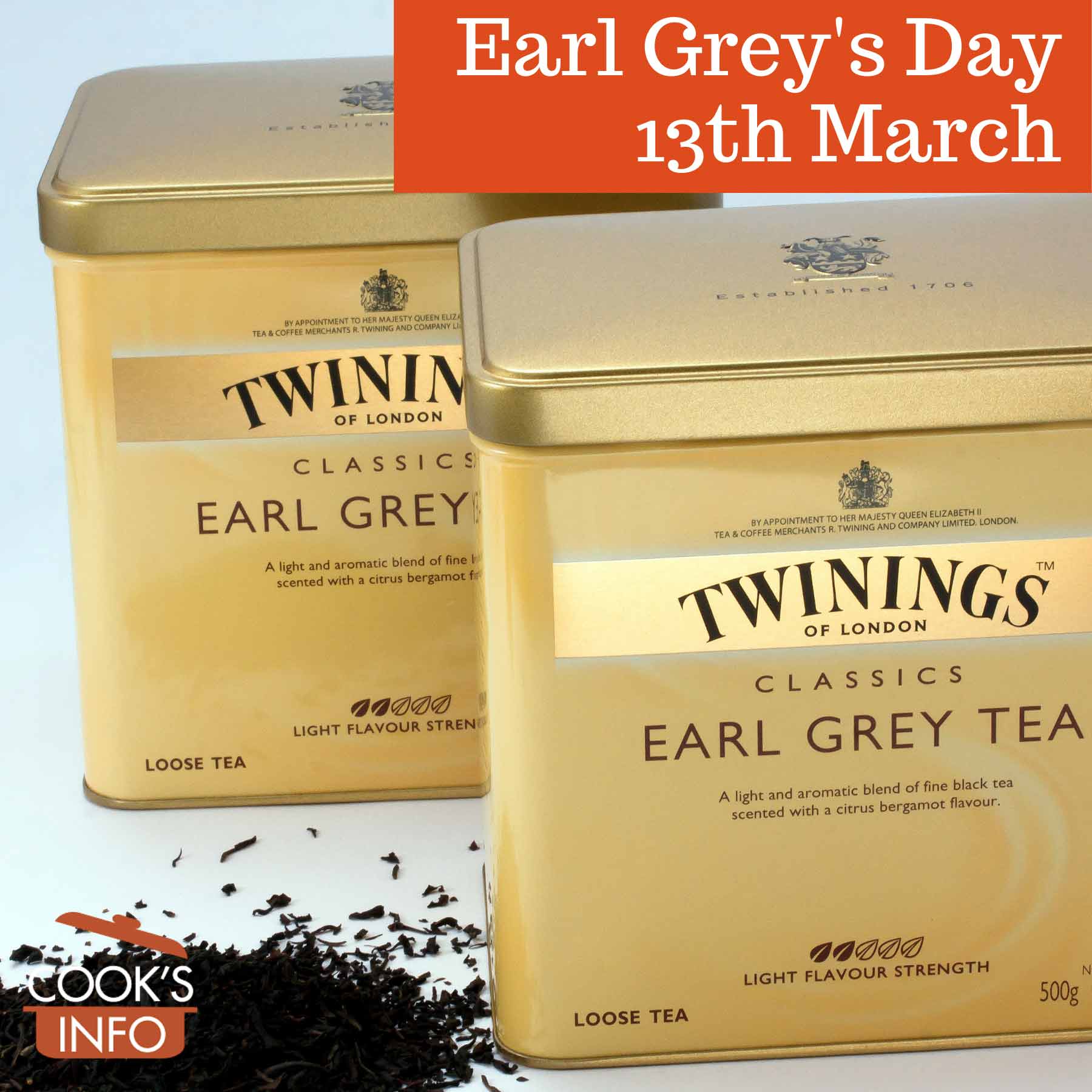 The 13th of March is the birthday of Charles Grey, the second Earl Grey, after whom the famous tea is reputedly named.

Earl Grey tea is one of the “earliest blended teas” that is still extant. [1]Davidson, Alan. The Penguin Companion to Food. London: The Penguin Group, 2002. Page 946.

Earl Grey is a blend of tea flavoured with bergamot. It is non-trademarked, which means anyone can make and sell it.

Do you have a favourite brand?

There is a long-standing taboo against putting milk in Earl Grey tea, but some people go ahead and do it anyway.

Some people like to add a slice of lemon to their Earl Grey tea.

Recognizing this perhaps, in 2011, Twinings decided to reformulate their Earl Grey mix and release it with lemon flavouring already added. By the middle of the year, they were forced to capitulate to outraged customer demands to make the original formula again, which they did. But rather than back down, they named the new one “THE Earl Grey”, and the old one “Classic Earl Grey” as part of their “classics” range. So if you want the original flavour, look for “classics” on the packaging.

Or, since Twinings felt at liberty to switch things up, why shouldn’t you as well, too, by trying different brands other than Twinings? You may find a brand other than Twinings that you prefer more, and is less confusing than the renamed teas at Twinings. Twinings seems not to have wanted long-time customers very much, anyway :

“[Earl Grey] was traditionally thought of as the tea you had when you went round to your grandmother’s”, Twinings’ Claire Forster told the paper. “Now a lot of young people are getting into Earl Grey…  All products need to evolve to keep up with people’s developing palates.” ” [2]Bielski, Zosia. Hands off my cuppa: Britons bitter over Twinings’ new Earl Grey. Toronto, Canada: The Globe and Mail. 30 August 2011.

Charles Grey was a reformer, and Prime Minister of the United Kingdom for four years.

We will probably never really know for sure why a blend of tea is reputedly associated with him.

Some sources theorize that he received a gift of black tea flavoured with bergamot oil, as a thanks perhaps for ending the monopoly of the East India Company in Britain’s trade with China. One problem with that is that bergamot was not used as a flavouring in Chinese tea.

In any event, we don’t know if he really did get any tea given to him, or if so when, from whom, or what it actually tasted like.

One more plausible theory has it that the bergamot-flavoured tea was simply one called Grey’s Tea, sold starting in the 1850s by the William Grey Company of Northumberland, England, which later had the “Earl” bit tacked on by advertisers to add a bit of poshness. [3]Hughes, Glyn. Earl Grey Tea. The Foods of England web site. 2 September 2018. Accessed February 2021 at http://www.foodsofengland.co.uk/earlgreytea.htm So in fact, this theory holds, there never was any actual association with the person Earl Grey at all.

The “Earl Grey” signature that appears on the packages of Twinings tea is actually that of the sixth Earl of Grey (1939 to 2013), obtained for marketing purposes.

So even though Twinings claims it was “invented for a British Prime Minister”, there is absolutely zero evidence of that.