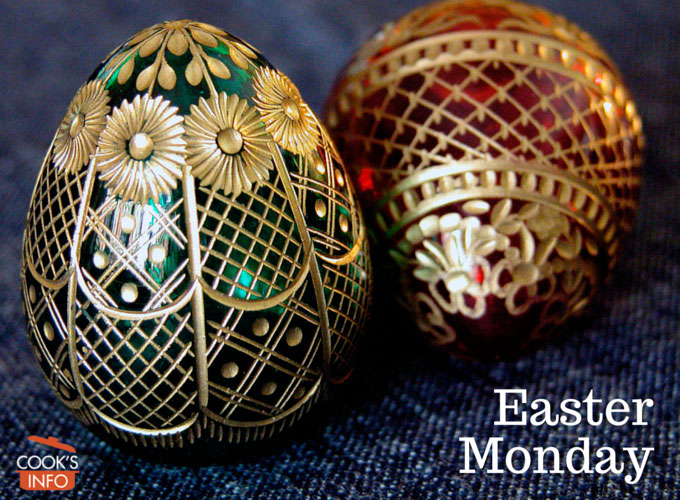 The date for Easter Monday varies wildly every year.

It is the Monday immediately after Easter Sunday.

It is an official holiday for everyone in Australia, New Zealand and the UK, as well as most of Europe. In Poland, not even the Communists had dared trying to abolish the legal holiday. In Canada, mostly only government workers have the day off. In the United States, it is a day off only in North Carolina.

By Easter Monday, most of the Easter Festivities are over, and leftover Easter Lily plants at the shops start to get marked down.

Some places, though, still carrying on with older Easter Monday traditions. In England, egg-rolling is still practised. Though exact rules and procedures vary by region, they all involve rolling hard-boiled eggs down hills.

In some cultures, Easter Monday is a day to sprinkle women with water, saying “may you never wither.” Often holy water from the church is used, to which a scent or perfume is added. In some cultures, on the next day — Easter Tuesday — women got to do the same to men, except using buckets of water, not just sprinkles. This is practised in countries such as Poland, Slovakia, etc. In Polish, it is called “Śmigus-dyngus” (aka Dyngus Day, aka Wet Monday.) In Ukranian, it is called “Oblyvanyi Ponedilok” (“Drenching Monday”.)

In Slovakia, young men make whips (called “korba”) from willow branches , and lightly whip the legs of girls with them. Girls they manage to catch give them in exchange a small trinket.

On Easter Monday in 1916, Padraig Pearse led an uprising in Dublin against the British. In front of the main Post Office, Pearse read the words which would lead a few years later to Irish independence:

“Irishmen and Irishwomen: In the name of God and of the dead generations from which she receives her old tradition of nationhood, Ireland, through us, summons her children to her flag and strikes for her freedom… We declare the right of the people to Ireland to the ownership of Ireland…”